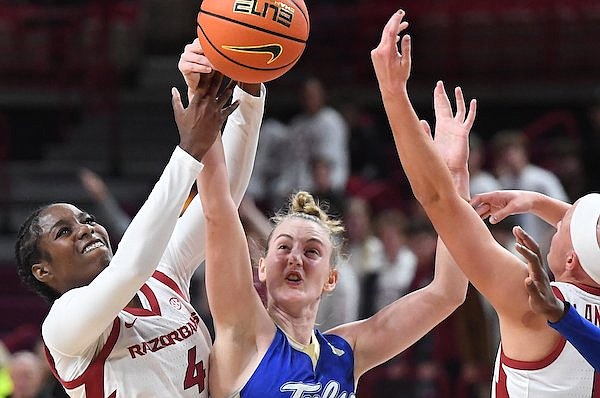 Arkansas' Erynn Barnum (left) and Tulsa's Katelyn Levings battle for a loose ball during a game Monday, Nov. 14, 2022, in Fayetteville.

Barnum’s record points came just days after posting her previous high of 19 against Central Arkansas. She scored 20 from the floor and went 7-of-12 from the free-throw line.

“This is a kid that now in our program for her fifth year, she gets it,” Arkansas coach Mike Neighbors said of Barnum. “She knows when her number's called and she knows when she can dominate, and she did.”

Fifteen of her points came in the second half to help fend off a fight from Tulsa, which hit 12 three-pointers in the game.

“I'm just trusting in myself,” Barnum said. “The confidence my teammates and my coach have in me plays a big role in my success. I'm just grateful for that.”

Arkansas (3-0) stormed to a 24-15 advantage after the first quarter, scoring nine points off turnovers. Senior guard Makayla Daniels led the way with 10 of her 19 points scored during the period.

The Razorbacks held a 41-34 advantage at halftime.

Arkansas responded quickly with threes from Maryam Dauda and Samara Spencer to grab a 51-46 lead. The Razorbacks shot 11-of-39 from beyond the arc.

The 39 attempts were the program's second most in a single game.

“They're a really good team, and they're really efficient.” Arkansas guard Rylee Langerman said of Tulsa. “We knew that they would go on a run. Keeping our heads down and not letting it get to us or letting us get frazzled out there was really important.

“I think we did that very well.”

The Razorbacks were able to maintain a lead throughout the remainder of the contest, and they shot an efficient 53.8% from the floor during the fourth quarter. Barnum hit four shots during the final period to help stave off Tulsa’s comeback bid.

Tulsa entered the game out-rebounding opponents by 17.5 per game, but Arkansas was plus-12 on the boards. Saylor Poffenbarger and Daniels had 10 and nine rebounds, respectively, at the guard positions.

“It's just a gut willingness and a race to the ball a lot of times,” Neighbors said. “I'm glad that we're winning them. Our guards are doing an unbelievable job.”

Arkansas is scheduled to host Kent State at Bud Walton Arena on Thursday.