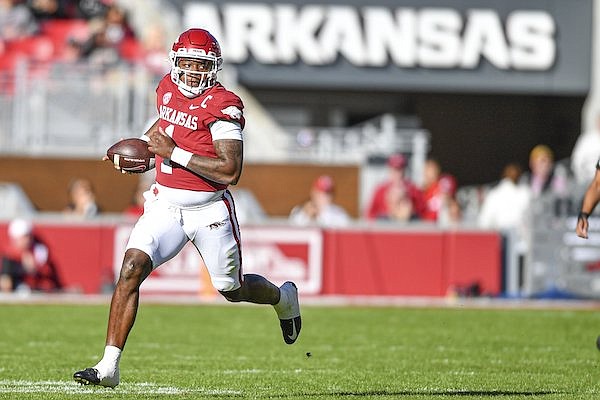 Arkansas quarterback KJ Jefferson runs with the ball during a game against Liberty on Saturday, Nov. 5, 2022, in Fayetteville.

FAYETTEVILLE — When the University of Arkansas football team finished 9-4 in 2021, quarterback KJ Jefferson started every game and the Razorbacks had a winning record in the close ones.

That hasn’t been the case this season.

Jefferson missed his second game when No. 7 LSU beat Arkansas 13-10 on Saturday at Reynolds Razorback Stadium.

Jefferson didn’t play against LSU because of a shoulder injury. He was held out of Arkansas’ 40-17 loss at Mississippi State on Oct. 8 after taking a hit to the head the previous week in a 49-26 loss to Alabama.

Last season Arkansas was 2-1 in games decided by three or fewer points, including a 31-28 victory over Mississippi State that made the Razorbacks bowl eligible.

The Bulldogs were 0 of 3 on field goal attempts, missing from 46, 23 and 40 yards. Their final miss was a potential game-tying kick on the final play.

Arkansas also won 16-13 in overtime at LSU last season and lost at Ole Miss 52-51 when the Razorbacks failed to convert a two-point conversion attempt after they scored a touchdown with no time left in regulation.

In addition to the three-point loss to LSU this season, the Razorbacks lost to Texas A&M 23-21 in Arlington, Texas, and to Liberty 21-19 at home last week.

Cam Little, who hit the game-winning field goal at LSU last season, missed a 42-yard attempt against the Aggies with 1:30 left that would have given Arkansas a 24-23 lead. The kick hit the right upright and bounced away.

Jefferson, who played against Liberty with a shoulder injury, was stopped inches short of the goal line on a two-point attempt that would have tied the score with 1:11 left after rallying the Razorbacks from a 21-0 deficit in the first half.

Arkansas now has two chances left to get bowl eligible and will need to beat No. 11 Ole Miss (8-2, 4-2) at home this Saturday night or win at Missouri (4-6, 2-5) on the road the Friday after Thanksgiving.

The Rebels lost to Alabama 30-24 at home on Saturday while No. 5 Tennessee pounded Missouri 66-24 at Neyland Stadium.

“Hopefully KJ will be healthy. We’ve got to find some good. Our defense played extremely well. We’ll get a healthy KJ back.

“You talk about motivation, that’d motivate me. Your best player on your team can come back and play? That would motivate all of us.”

The Razorbacks held LSU to 284 yards and the Tigers’ fewest points of the season and had seven sacks.

“We can go win with a defense that plays like that,” Pittman said. “So there’s some things.

“Last week, there was no good anywhere. Had about one or two guys that played well on the whole team. At least we’re rallying around and played better.

“The result was the same — which is terrible — but I do think we’ll rally around. I think we’ll have a really good game plan and play well against Ole Miss and I think we’ll play well the week after that, too.”

With Malik Hornsby and Cade Fortin playing quarterback in Jefferson’s absence, Arkansas was held to 249 yards on 68 snaps for a 3.7-yard average.

“We’re certainly running gap schemes, running inside zone schemes, running sweeps, running outside zone and not seeming to have much success on any of it now,” Pittman said. “And part of it is, to be perfectly honest with you, they’ve got to respect that the quarterback’s going to pull the ball and throw it. And if they don’t, you’ve got problems.”

“It’s two weeks in a row where we can’t run the ball and we can’t throw and catch. We better figure out how to do that. Obviously, we felt like we had a game plan that would work and we got stuffed.”

Pittman said Jefferson didn’t do much throwing in practice leading into the LSU game and that his shoulder didn’t feel well as the week went along.

“He’s like out in a desert and nowhere to go,” Pittman said. “It hurt, it was sore.”

Pittman said he talked to Jefferson on Thursday about the plan for the LSU game.

“He hadn’t practiced in two weeks much, and we decided the best thing for him would be to rest,” Pittman said. “Hopefully, he’ll be ready by Monday and he’ll be ready for Ole Miss.

“It was either that and do the same thing and each week have the same result with a guy who can’t practice, and we’re trying to get him healed up.”