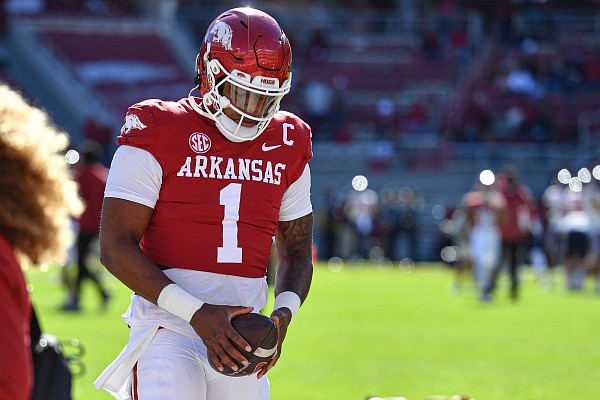 That was the update from Pittman on Monday as he previewed the Razorbacks’ upcoming meeting with the Rebels, which is set to kick off at 6:30 p.m. on SEC Network. Jefferson did not play against LSU last week because of a shoulder/clavicle injury.

Pittman added that Jefferson, a redshirt junior, feels better this week than he has since Arkansas’ win at Auburn on Oct. 29.

“Those things certainly change,” Pittman said. “They have over the last two weeks. We'll have to see how he is at practice, to be perfectly honest with you.

“But I know he feels better than he has in the last two weeks."

Jefferson has thrown for 1,981 yards and 17 touchdowns against 3 interceptions, and rushed for 425 yards and 6 scores. The LSU game was the second Jefferson has missed this season.

In the 13-10 loss to LSU, quarterback Malik Hornsby started in Jefferson’s place and completed 4 of 9 passes for 24 yards, and ran for 37 yards on 18 carries before being replaced by Cade Fortin, a transfer from South Florida.

Fortin accounted for the Razorbacks’ lone touchdown, a 40-yard pass to receiver Matt Landers in the fourth quarter. Fortin, who was 8-of-13 passing for 92 yards, entered the game late in the third quarter.

Pittman said there would be an open competition between the back-up quarterbacks should Jefferson not be able to play this weekend.

“I think, obviously, the problem we have a little bit is the unknowing of KJ in game-planning,” Pittman said. “It was a little easier if Malik is the guy because there are some similar talents, run and dual-threat, even though Cade made some nice runs the other day in the game.

More from WholeHogSports: Arkansas basketball moves up in AP poll

“I think our team and our staff, we just want to know if (Jefferson is) going to be available or not, if he's going to play. I think our team needs him, or we need to go the entire week and say he's not going to. I think a lot of that will be said today.”

Without Jefferson, Arkansas totaled 249 yards of offense against LSU, the third fewest by the Razorbacks in a game under third-year offensive coordinator Kendal Briles.

“You go out in the conference and you lose your best player, your quarterback, it’s going to affect your football team,” Pittman said when asked about the role injuries have played on Arkansas’ season. “And it’s not only about affecting your team, it’s affecting how people play against you. If you notice the box numbers, the amount of blitzes we’re getting on run-downs now vs. what we did before with KJ running, it’s different.

“They’re not afraid of it.”

Additionally, Pittman said right tackle Dalton Wagner, who did not play against LSU because of a back injury, will “practice some” Monday and the coaching staff will monitor his activity.

Defensive backs Myles Slusher and Anthony Brown, arrested Nov. 6 in connection with disorderly conduct and suspended last week for at least one game, will practice this week, Pittman said. Brown will remain on the scout team defense, and Slusher will move up from the scout team.

Slusher’s status for Saturday is up in the air for now. He has 20 tackles, 4 for lost yardage, 2 sacks and 1 pass breakup in 5 games this season.

“I don’t know exactly yet what we’re going to do,” Pittman said. “Wednesday, I’ll know for sure at that time. I’ve got to make a decision by then, for sure.”