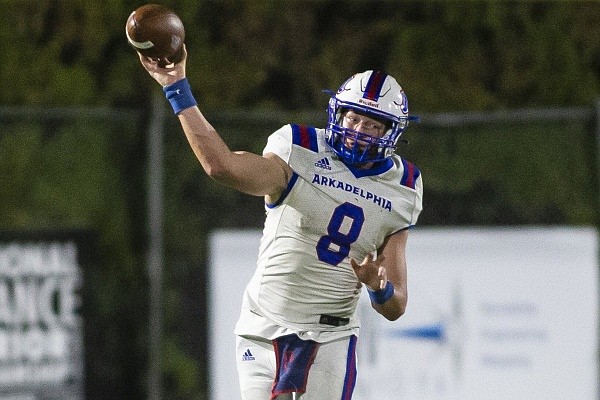 Arkadelphia senior quarterback Donovan Whitten attempts to pass during a game against Shiloh Christian in Springdale.

In the process, he learned that he had a preferred walk-on offer from the Razorbacks.

Whitten, 6-3, 220-pound quarterback, has led the Badgers to a 9-0 record entering the second round of the Class 4A playoffs on Friday against Ozark.

Not long after communicating with Scherer about visiting for the Razorbacks, the Arkansas assistant informed him of the offer.

“He said, ‘I just want you to know we want to give you a preferred walk-on offer as a linebacker,’” Whitten said.

Whitten has completed 139 of 219 passes for 2,102 yards and 31 touchdowns against 2 interceptions this season. He has also rushed 74 times for 423 yards and 6 touchdowns.

“It was definitely a dream come true,” Whitten said of the Arkansas offer. “I’ve lived here my whole life. I’ve been an Arkansas fan forever. One of my favorite moments is that (Hunter) Henry heave against Ole Miss. It was jaw-dropping for me, honestly.

“I was so thankful to have this opportunity.”

Before switching to quarterback as a junior, Whitten played linebacker as a sophomore. If he decides to be a Razorback, he believes the transition to defense won’t be difficult.

“I played linebacker when I was a sophomore that kind of gives me a little bit of an edge,” he said. “I’ve played it before. I kind of have a feel for it.”

Scherer brought up physicality during their conversation.

“He said, ‘I know you’re a quarterback, but you still run through those guys and try and get first downs? I said, ‘Yes,’” Whitten said.

“He’s got the ability. He’s a physical kid,” Schucker added. “On the offensive side of the ball, he’s a physical runner. He does not shy away from contact one bit.”

“He’s the complete package with the athleticism and the body size that he has. He’s able to be dynamic and play multiple positions,” Schucker said. “If you really look at him and break him down, he’s got the ability to lead and handle every situation in any kind of game.

“That’s the type of moment that he really shines. He handles the big situations and big moments very, very well. Probably one of the best I’ve ever seen. That’s what really separates him as a player.”

Whitten competed in the 220-pound division in wrestling and helped the Badgers win the Class 4A state title in February in his first year trying the sport. He also pitches for the school’s baseball team.

“Wrestling kind of gives you the edginess,” Whitten said. “You’re 1-on-1 with you and the guy in front of you. Same thing with pitching in baseball. There’s no way to get out of it.

“You can’t get out of pitching to the guy in front of you.”

Fall, 6-11, 217 pounds, of Denver Accelerated Schools, will choose between Arkansas, Auburn, Rutgers and Seton Hall during a 5:30 p.m. ceremony.