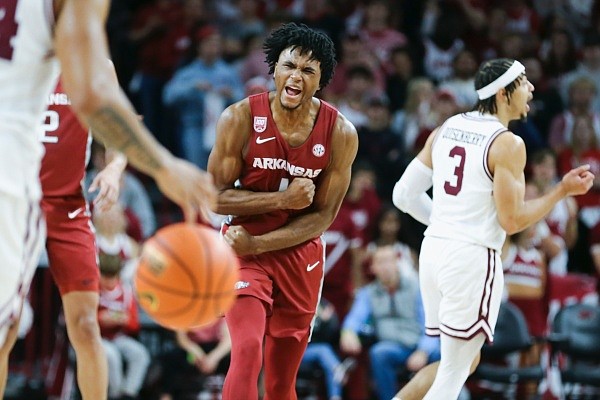 Arkansas guard Ricky Council IV (1) reacts, Friday, November 11, 2022 during the first half of a basketball game at Bud Walton Arena in Fayetteville. Visit nwaonline.com/221112Daily/ for the photo gallery.

FAYETTEVILLE — The Friday night crowd inside Bud Walton Arena came alive a couple of times as No. 9 Arkansas went on a pair of lengthy first-half runs against Fordham.

Ricky Council, the Wichita State transfer playing his second game as a Razorback, was a catalyst in the team’s success on both ends. He, too, was emotionally in-tune with those in attendance during the game’s biggest moments.

“I really can’t describe it,” Council said after Arkansas’ 74-48 victory. “I know I was out there looking like a crazy man. I was just so excited. Like I said, it was really fun playing defense tonight.

“I was asking Coach to guard their best player. I was locked in on the defensive end. It just generated offense.”

Council finished the Razorbacks’ second win with a team-high 15 points, a career-high 7 assists and 2 steals. Rams players were 0-of-3 shooting in the game when Council was Arkansas’ nearest defender.

Through two games, opponents are 3 of 12 from the floor, including 0 of 6 from three-point range, when defended by the guard.

But, above all else, he was dynamite offensively in a variety of ways. Council’s seven assists generated 14 points for the Razorbacks, and the first six were spread among as many teammates.

He had eight potential assists, good for second on the team to forward Makhi Mitchell’s nine.

“We really liked how Ricky read the defense,” Arkansas coach Eric Musselman said Monday. “He knew where his other four outlets were. Ricky is a guy that can get to the rim, he can make mid-range shots, he’s a really, really good mid-range shooter.

“I thought he did a great job. I mean, seven assists, (that is) a lot of assists for anybody, but especially unique for somebody that maybe is wired to be a scorer.”

Against Fordham, Arkansas placed Council in the role of primary ball handler in middle pick-and-roll as a result of matchups and the way the Rams were defending the Razorbacks in the first half. The guard impressed in how he reacted to the shape of the defense, and utilized short rolls from big men and basket cuts by players stationed in the corners and short corners.

Council put teammates in great positions to score. Arkansas got all seven of the two-point attempts he created to fall.

Council said one of his brothers has told him his entire life that he should ask his coaches to play him at point guard. He is the type, though, who simply wants to do what the coaching staff asks of him.

Council leads the Razorbacks with nine assists entering Wednesday’s 7 p.m. home game against South Dakota State, and he has only three turnovers in a team-high 73 minutes. According to KenPom data, he holds an assist rate of 23.1%.

His 3-to-1 assist-to-turnover ratio places him in the 88th percentile nationally, according to CBB Analytics.

“No, I haven’t asked Coach (to play point guard),” Council said. “Like I keep saying, I’m just going to do what Coach wants me to do. He told me to do it (Friday) and I felt like I did a good job.

“Maybe he’ll trust me moving on in the future.”