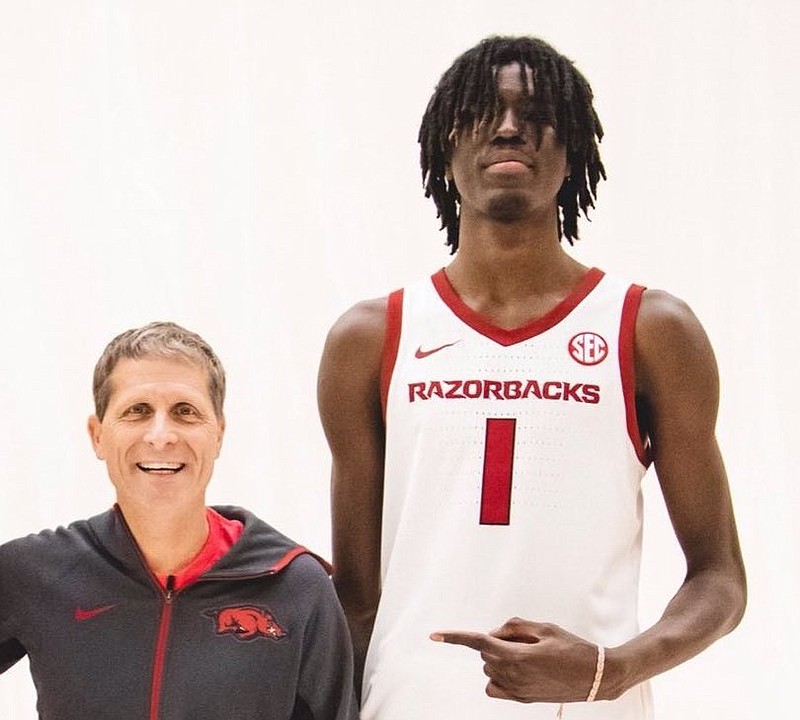 Fall, 6-11, 217 pounds, of Denver Accelerated Schools, picked the Razorbacks over other finalists Auburn, Rutgers and Seton Hall during a 5:30 p.m. ceremony on Tuesday.

He made an unofficial visit to Arkansas for the Razorbacks’ 75-73 victory over Kentucky on Feb. 26, and officially visited Fayetteville for the Alabama football game weekend of Sept. 30-Oct. 2. Fall said he told Musselman he was going to be a Razorback last Thursday.

Razorbacks fans also made a major impact on Fall.

“The atmosphere there is just crazy,” Fall said. “The fans…this is a fun fact: We went there on an unofficial visit to watch them play Kentucky and I had to watch the game on the (big screen) because the fans wouldn’t sit down. Like, I couldn’t see the court or nothing, and I had a good seat, too. That just shows you how crazy they go for their sports.”

Fall was a standout at the prestigious NBPA Top 100 camp in late June and early July, when he led the event in scoring at 14.9 points per game, had a camp-leading 9.4 rebounds and an event-leading 4.9 offensive rebounds.

Musselman was elated with the addition of Fall.

“We are extremely excited about the addition of Baye Fall to our program,” Musselman said. “Baye has been a top priority for our coaching staff since the beginning of our tenure at Arkansas.”

He and ESPN 4-star and teammate Assane Diop played for the Colorado Hawks in the spring and summer under the direction of Hawks director Greg Willis, who is a Fort Smith native.

“My relationship with Ronnie Brewer, he played a big role in this,” Fall said. “He recruited me the hardest.”

Fall also cited assistant coaches Keith Smart and Anthony Ruta, and the entire staff for making him feel at home.

“All of them – Coach Smart, Coach Ruta, everybody else,” Fall said. “The (graduate assistants), everybody. They made it feel like home when I went there. It just felt like a family thing.”

“Fall makes his mark by outworking his opponent,” Biancardi said in an earlier interview. “His game is productive on the glass and scoring paint points in a variety of ways. (He) could be a tenacious offensive put-back threat as well as finishing drop-off passes or as a lob catcher. When he get an angle to the rim, he is a force. A long frame that has vertical explosion and lateral agility.

“His shooting touch is coming along, and his three-point shot is capable at this point.”

Faye, Diop and Denver Accelerated Schools are scheduled to play in the Big Show Tip-Off Showcase at Fort Smith Northside on Nov. 19.