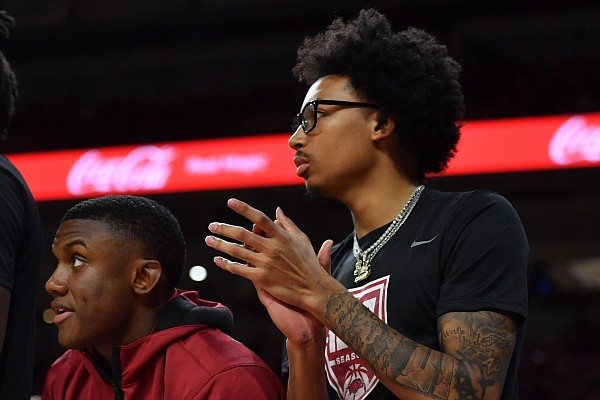 Arkansas guard Nick Smith Jr. cheers Monday, Nov. 7, 2022, from the bench during the first half of play against North Dakota State in Bud Walton Arena in Fayetteville. Visit nwaonline.com/221108Daily/ for the photo gallery.

FAYETTEVILLE — Nick Smith’s much-anticipated debut at Arkansas continues to be on hold.

Razorbacks Coach Eric Musselman said Monday a return date for Smith, a 6-5 guard voted a preseason first team All-SEC player by the media and coaches, remains uncertain as he recovers from a right knee injury.

“Nick’s doing some stuff on his own — shooting, rehabbing with the trainer,” Musselman said. “He hasn’t practiced, so we’re just going to stick to going day-by-day. … He continues to slowly but surely improve.”

If Smith wasn’t able to practice Monday, it seems unlikely he would play against South Dakota State (1-1) when the Jackrabbits take on the Razorbacks at 7 p.m. Wednesday in Walton Arena.

“Each day that goes by, he gets closer to rejoining us in practice,” Musselman said. “But he’s not there as of [Monday].”

Smith is projected to be a top-five NBA draft pick by multiple websites.

More from WholeHogSports: Razorbacks showing signs that chemistry may be ahead of schedule

“We’ve had to make a lot of adjustments without Nick, because we spent a good portion of our offseason developing play packages and roles around him, but I think the guys have done an incredible job,” Musselman said. “The guys have created an identity through two games, a defensive identity.

“Scheme-wise, especially defensively, I think we’re ahead of maybe where we thought we’d be.”

“We miss Nick for sure, especially offensively and perimeter shooting,” Musselman said. “But I think guys have stepped into different roles.”

Ricky Council, a 6-6 junior transfer who was the American Athletic Conference Sixth Man of the Year last season, was expected to play primarily on the wing for the Razorbacks, but he has become a starter and primary ball-handler in Smith’s absence.

“It’s not something that we’ve seen in a game, but in practice it’s something that we know is possible,” Arkansas freshman forward Jordan Walsh said of Council working at point guard against Fordham. “That’s why Coach trusted him to do it in the game, because he’s seen it over and over again in practice. I’m proud of him, and I’m glad he took care of it.”

Musselman said he decided to have Council take over at point guard during the game.

“We kind of saw it develop as the game unfolded,” Musselman said. “We did not go into that game thinking Ricky Council would be handling the ball in middle pick-and-roll, but that’s what the game called for, and that was an adjustment based on how Fordham was defending us.”

Trevon Brazile, a 6-10 sophomore transfer from Missouri, has played off the bench the first two games, but he’s averaging 14.5 points and 10.0 rebounds in 32.0 minutes.

Musselman said Brazile has practiced a lot at the small forward spot but played power forward in games.

“We would eventually like to get him a few minutes at the small forward spot as we go against some teams that have a little bit more size,” Musselman said. “But he plays starter minutes.”

Jalen Graham, a 6-9 senior transfer from Arizona State, had 10 points and 4 rebounds in 11 minutes against Fordham after not playing in the opener.

Musselman said after the North Dakota State game Graham was healthy, but it was a coach’s decision not to play him. After the Fordham game, Musselman praised Graham’s play before being asked about him.

“He’s really worked hard this week,” Musselman said. “Much harder than he has in prior weeks. I thought it was important for him to get some minutes.”

Graham came out of the Fordham game with seven seconds left.

“I told him when they subbed him out at the end there, ‘Way to earn your minutes back,’ ” Council said. “He came out with great energy, finishing, great footwork as always.”

Junior guard Davonte Davis had 7 points and shot 3 of 12 against Fordham, but more significantly he finished with 5 assists and 1 turnover after having 5 turnovers without an assist against North Dakota State while scoring 18 points.

Walsh had 12 points on 5-of-7 shooting and added 4 rebounds and 1 assist in 21 minutes against Fordham after fouling out in 18 minutes in the opener with 4 points, 2 rebounds and 3 assists. He limited his fouls to three in the Fordham game.

“It was good, but the main goal for me was just to win another game to put on our resume,” Walsh said. “That was the biggest thing for me, just to move on to the next game already being 2-0.”

Other key players in the rotation for the Razorbacks so far also have included 6-9 senior Makhi Mitchell, a transfer from Rhode Island averaging 8.0 points and 4.0 rebounds, and 6-7 freshman guard Anthony Black, who is averaging 6.5 rebounds but shooting 4 of 15 from the field.

“I think we’re sharing the ball, but our passing numbers right now have been right around that 150 to 170 [per game],” Musselman said. “So we’re about 30 passes to 45 passes short of what the teams were the last two years towards the second half of the [season].

“We still have time to improve on different people touching the ball. We would like to try to play with a little bit more pace offensively.

“I think that we walk the ball up the floor at times a little bit more than maybe what we would like. And then, like every team in the country, offensive execution can certainly improve.”

The offensive execution figures to improve whenever Smith is ready to play.