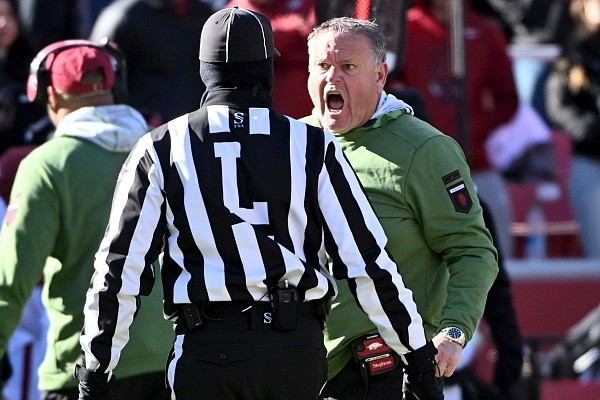 FAYETTEVILLE — Arkansas fans and Sam Pittman took issue with a spot late in the game that gave LSU a first down and possibly prevented the Razorbacks from getting the ball back for a final possession with more time on the clock and more timeouts in their pocket.

“Not good,” Pittman said to describe his take on the play. “What can I say? Nothing?

“We’ve sent it in to the SEC office and I’m sure we’ll get something back from them, but I didn’t particularly like it.”

On a third-and-4 from the Arkansas 18, Jayden Daniels rolled right and threw a quick pass to Jaray Jenkins, who turned up and was immediately hit by Dwight McGlothern, his former LSU teammate, and driven out of bounds.

The ball was spotted right on the line to gain, the 22-yard line, but the call went to the replay booth with 2:18 remaining.

As ESPN showed the replay, analyst Greg McElroy noted, “It looked initially like he was going to be a little bit short, but it was a real favorable spot on the sideline.”

When referee James Carter announced the spot had been upheld, giving LSU a first down, Razorback fans booed and Pittman appeared livid on the sideline.

SEC rules expert Matt Austin said he thought Jenkins looked short of the line to gain, but he felt the call was difficult to overturn because there was no conclusive video evidence.

The Tigers punted four plays later to give Arkansas possession at its 24 with 1:35 remaining and no timeouts.

Pittman was uncertain on Monday about the status of three key Razorbacks — quarterback KJ Jefferson, right tackle Dalton Wagner and nickel back Myles Slusher — who missed last week’s 13-10 loss to No. 7 LSU.

All three players practiced Monday as the Razorbacks worked inside the Walker Pavilion with evening snow showers in Northwest Arkansas.

Jefferson played through a clavicle injury in a 21-19 loss to Liberty two weeks ago, but the soreness and an accumulation of missed practice time led to the decision for the junior to sit out last week.

Jefferson was at the front of the drill line and going through passing drills during the media viewing portion of the practice.

“We anticipate him playing on Saturday,” Pittman said. “Those things certainly change. They have over the last two weeks, but he feels better than he has since the Auburn game.”

Wagner is dealing with a back issue that had affected him previously in his career.

Slusher was suspended last week following his arrest for disorderly conduct in the early morning hours following the loss to Liberty. He has been reinstated to the top offense from the scout team but Pittman is not certain his suspension is lifted.

“I don’t know exactly what we’re going to do,” Pittman said. “They’re going to practice … and we’ll make a decision. Wednesday, I’ll know for sure at that time.”

Pittman said knowing Jefferson’s availability would be helpful for game planning. Malik Hornsby started at quarterback last week but struggled before giving way to Cade Fortin in the third quarter.

“I think, obviously, the problem we have a little bit is the unknowing of KJ in game-planning,” Pittman said. “It was a little easier if Malik is the guy because there are some similar talents, run and dual-threat, even though Cade made some nice runs the other day in the game.”

Pittman said the competition would be open between Fortin and Hornsby if Jefferson is not available.

The game-time temperature will probably be in the low 30s for Saturday’s visit by Ole Miss and it will continue to drop toward a projected low of about 23 degrees overnight.

“The colder the better,” Pittman said. “Obviously we have to score points, too. We have to run our offense, too. But we’re rooting for a freeze-out if we can get it.”

When is the last time Arkansas won a game started by a reserve quarterback? See the answer at the bottom of this report.

Pittman opened his weekly news conference by offering thoughts and prayers to the University of Virginia after shootings on campus left three football players dead and others wounded.

“We’re certainly praying for all involved in that situation,” Pittman said. “Terrible.”

The Razorbacks had another low red-zone failure against LSU, their third of the season that had reached the opponent 1-yard line after previous non-scoring trips to the 1 against Missouri State and Mississippi State.

This time, with Arkansas leading 3-0 late in the first quarter, AJ Green rushed for 8 yards on first and goal from the 10, then reached the 1 on his next run. The Tigers stopped quarterback Malik Hornsby for a 2-yard loss on third down, then was contained on his draw play on fourth down for no gain.

Arkansas ranks 97th in the country with a 79.6% scoring rate (35 of 44) inside the opponents’ 20-yard line. The Razorbacks have 27 touchdowns and eight field goals on those series. The touchdown scoring rate of 61.4% on red-zone incursions is tied for 72nd in the country.

Pittman said Ty’Kieast Crawford’s first start actually went well despite the junior being the blocker on Harold Perkins’ strip-sack of Cade Fortin on the Hogs’ final offensive play against LSU. The Tigers recovered the fumble with 1:19 remaining to clinch their 13-10 win. Perkins was a menace with a school-record tying four sacks and two forced fumbles.

Pittman said he was discussing Crawford’s start at right tackle for the injured Dalton Wagner with offensive line coach Cody Kennedy just prior to his weekly news conference.

True freshman quarterback Connor Noland, filling in for the injured Ty Storey, led the Razorbacks to a 23-0 win over Tulsa on Oct. 20, 2018.