Defense has more to prove after strong stretch 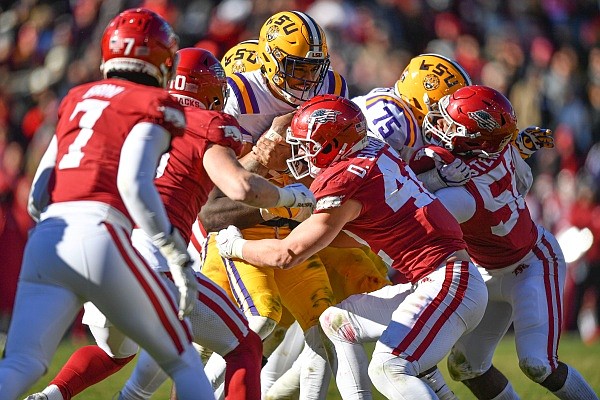 Arkansas linebacker Drew Sanders (42) and others tackle LSU quarterback Jayden Daniels (5), Saturday, Nov. 12, 2022, during the fourth quarter of the Tigers’ 13-10 win over the Razorbacks at Donald W. Reynolds Razorback Stadium in Fayetteville. Visit nwaonline.com/221113Daily/ for the photo gallery.

FAYETTEVILLE — As Arkansas has fought to become bowl eligible in recent weeks, the Razorbacks’ defense has pulled its weight to make that happen.

But in large part to sluggish showings from the offense in back-to-back games, the sixth victory of the season has been elusive.

At the rate defensive coordinator Barry Odom’s unit is operating of late, it may take only a few offensive touchdowns from Arkansas for post-season hopes to come to fruition. The Razorbacks have allowed 13 points in the last 6 quarters, and 4 touchdowns in the last 2 games against a pair of top-25 opponents at the time, Liberty and LSU.

Arkansas coach Sam Pittman said Monday that the group’s play in recent weeks has resembled some of the best defensive stretches in his first two seasons on campus.

“I’m talking about chasing the ball, the physicality,” he added. “I don’t know why we didn’t earlier. A lot of it has to do with we might not have been comfortable with the guys around us because there was a lot of shuffling going on.

More from WholeHogSports: Thompson quits team, Slusher back in the fold

“Regardless, we’re playing much better now.”

Essential to Arkansas’ success has been its pass rush. The Razorbacks have recorded 11 sacks in the last two games, including seven last Saturday against the Tigers.

Arkansas in the last two games has also matched its best two-week total of the season in terms of tackles for loss. It had nine against Liberty and eight against LSU.

The disruption from the front seven has led to interceptions from freshman cornerback Quincey McAdoo and defensive back Latavious Brini, and a forced fumble by defensive end Jordan Domineck. The takeaways have provided the Razorbacks’ offense opportunities to get much-needed points.

“You kind of saw from the loss at Liberty, the way that they played I thought was really good,” Pittman said. “I just think we’re playing faster and we’re swarming to the ball better and we’re getting after the quarterback a lot better.”

Players on the field, he added, are finding their groove.

More from WholeHogSports: Pittman's final media availability ahead of game against No. 14 Ole Miss

“I think whenever you have corners that can really lock down, it helps you be more aggressive, and whenever we can pressure the quarterback, I think that’s whenever we’re best,” Pool said. “One touchdown the past six quarters is something we’re proud of.

“But we have a lot more to prove, and I think we have two really good opponents left to prove it.”

Defensive end Zach Williams added that a key to carrying confidence and momentum gained from previous performances is continuing to run to the football with “ferocity.”

Entering this weekend, Williams has matched career highs of 3.5 sacks and 5.5 tackles for loss this season. His 26 tackles this fall are a career high.

“But we can always have room for improvement.”

Arkansas last week limited an LSU offense averaging 40.7 points in wins over Florida, Ole Miss and Alabama to 1 touchdown and 284 yards, the fifth fewest allowed by the Razorbacks under Odom.

The third-year Arkansas coordinator has coached from the sideline in recent weeks, as well. It is believed he moved from the press box to the sideline for the Mississippi State game on Oct. 8.

To Pittman and those who make up Odom’s defense, it is paying dividends.

“He brings great energy,” Pool said. “He does a great job about making adjustments, coming up to us, looking us in the eyes and giving us exactly what we need to do. I think our defense has responded to it, especially our defensive backs.

“His energy down there is infectious.”

Pittman added that Odom’s presence on the sideline is beneficial to the players because in-game tweaks can be made and relayed face-to-face.

“His ability to make changes himself, besides through the headsets, I thought we needed that,” Pittman said. “And we felt like it would help us. That was probably the original reason why we asked him to come down.

“The kids have a lot of respect for him.”