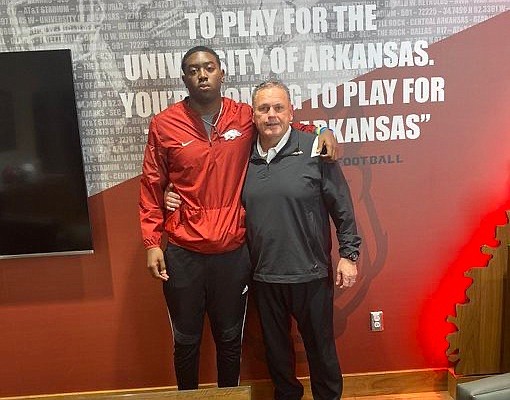 Arkansas defensive line commitment Quincy Rhodes has shown he has the tools to become a high-level SEC talent in the future.

Rhodes, 6-7, 260 pounds, of North Little Rock, has an impressive combination of size and athleticism, and he should sharpen his skills even more in Fayetteville.

“He’s got great feet. His quickness and his ability to read the edge blocker and get into run lanes and into pass rush lanes are just phenomenal,” said North Little Rock coach Randy Sandefur, who added Rhodes has a great motor. “He is around the football about 80% of the time.”

He pledged to the Razorbacks in February over offers from Arkansas State, Memphis and Jackson State, and interest from Virginia Tech, Tennessee, TCU, Florida State, California and Central Arkansas.

Rhodes played at North Little Rock as a freshman before spending his sophomore and junior years at Jacksonville. He transferred to North Little Rock after his junior season and bought in to the Charging Wildcats’ offseason program.

“His body has changed,” Sandefur said. “He was strong when he got here, but he’s really worked in the weight room to get himself stronger.”

He played tight end and linebacker at Jacksonville before concentrating on putting his hand in the dirt at North Little Rock.

Rhodes, a 4-star prospect by 247 Sports, has 75 tackles, 7 tackles for loss, 10.5 sacks, 30 quarterback hurries, 1 pass breakup, 1 recovered fumble and 7 exceptional plays this season. He has been selected to play in the U.S. Army Bowl at the Ford Center in Frisco, Texas, on Dec. 17.

Fort Smith Southside coach Kim Dameron, a former defensive back at Arkansas under Lou Holtz, was a college assistant coach at several schools, including Ole Miss, Louisiana Tech, Cincinnati before being the head coach at Eastern Illinois fro 2014-18.

Rhodes had 9 tackles and 1 sack in the Charging Wildcats 28-14 victory over the Mavericks in the first round of the playoffs last Friday. Dameron was impressed with Rhodes.

“Long, explosive, versatile player,” said Dameron, who was a senior defensive analyst at Kansas prior to being hired at Southside in June 2020. “He is physical at the point of attack, sheds blocks and makes plays.

“Good motor and pursues the ball. Wish we had him on our team.”