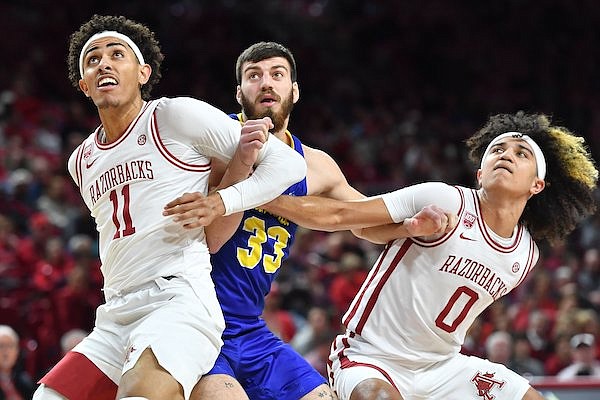 FAYETTEVILLE — Ninth-ranked Arkansas used big runs in both halves to cruise to its third win of the season Wednesday.

The Razorbacks closed the first half with a 10-2 spurt, then went on an 11-0 run early in the second half to put away the Jackrabbits in their 71-56 victory at Bud Walton Arena.

It was Arkansas’ final game before heading to the Maui Invitational for three games beginning Monday against Louisville.

The Razorbacks’ late first-half run was keyed by freshman Jordan Walsh. The wing kicked things off with Arkansas’ second three-pointer of the night with 2:13 remaining.

Trevon Brazile later added a dunk, then Ricky Council and Makhi Mitchell added layups. Following a free throw by Mitchell, Arkansas held its largest lead of the half at 41-27.

The Razorbacks quickly put South Dakota State away in the second half. Walsh was at the heart of Arkansas’ push, which put it ahead 52-30 and forced a Jackrabbits timeout.

He added five points after halftime — including his second three-pointer — before his night came to an abrupt end with 15:10 to play because of an ankle injury. Walsh finished with 10 points on 5-of-7 shooting and 3 steals in 16 minutes.

The Razorbacks outscored South Dakota State by 21 points when Walsh was in the game.

Council capped the 11-0 run with a free throw and a transition dunk, which was assisted by Davonte Davis.

The Razorbacks led by as many as 27 points with 8:39 left on a fast-break layup by Davis. The junior guard finished the game with 13 points.

Council, for the third consecutive game, paced Arkansas offensively with 19 points on 8-of-12 shooting. The Wichita State transfer scored 11 points in the first half on 5 of 7 from the floor.

Missouri transfer forward Trevon Brazile recorded his second double-double in three games with the Razorbacks. He put up 13 points and 10 rebounds to go with 2 blocks and 1 steal.

Brazile had a season-high four turnovers, but his final score of the night was a highlight-reel, one-handed dunk over Jackrabbits forward Broden Lien that sent the arena into a frenzy.

After making six three-pointers in its first two games, Arkansas made a season-high 7 threes on 22 attempts (31.8%). The final numbers were skewed a bit late in the game as benches emptied on both sides.

The Razorbacks knocked down 6 of their first 13 three-point looks.

The Jackrabbits shot 32.1% overall – 3 of 16 (18.8%) from three – and were led by nine points each from Zeke Mayo and Luke Appel. South Dakota State committed 20 turnovers in the loss that resulted in 23 points for Arkansas.

The Razorbacks have forced 64 turnovers in their first three games.