Musselman: Jackrabbits will be good test for Hogs 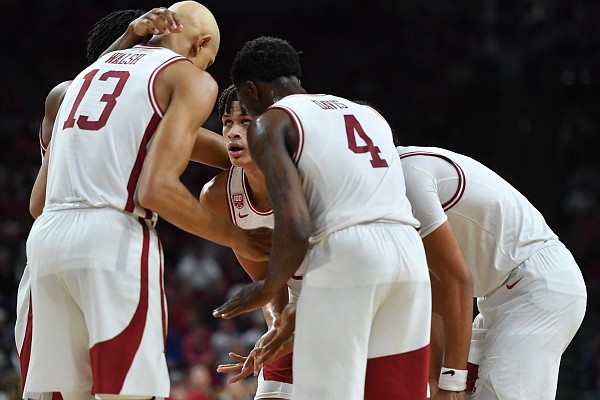 Arkansas players huddle on Monday, Nov. 7, 2022, against North Dakota State during the second half of the Razorbacks’ 76-58 win in Bud Walton Arena in Fayetteville.

FAYETTEVILLE — There has been plenty of November Madness less than two full weeks into the college basketball season.

• Perennial NCAA Tournament team Florida State is 0-3 with all of its losses to mid- or low-major programs.

• California-Davis beat California for the first time in 34 tries.

The No. 9 Arkansas Razorbacks (2-0) hope to avoid becoming the latest upset victim of the November Madness when they play South Dakota State (2-1) at 7 tonight in the 500th men’s game in Walton Arena.

Louisville, which plays Arkansas in the Maui Invitational on Monday, is 0-3 with losses to Bellarmine, Wright State and Appalachian State.

“Look, the way that college athletics is in basketball, baseball, football, anybody can beat anybody,” University of Arkansas Coach Eric Musselman said. “We see it on a daily basis.

“The transfer [portal] has changed this dramatically. I mean, I look at South Dakota State’s team and look at the pieces that they have back.”

The Jackrabbits lost their top three scorers from last season’s 30-5 team that went 18-0 in the Summit League with Douglas Wilson graduating, Baylor Scheierman transferring to Creighton and Noah Friedel transferring to James Madison.

But four players return who started at least 14 games last season when South Dakota State lost to Providence 66-57 in a first-round NCAA Tournament game. Also back is senior forward Luke Appel, the Summit League’s Sixth Man of the Year.

“We’ve got six freshmen and 11 new players, so we have to play at a high level where you can win games like this. It doesn’t just happen.

“And we scheduled South Dakota State because we believe that they can win their conference.”

Dentlinger is averaging 16.7 points and 4.7 rebounds.

“Dentlinger is a guy off to a great start for them,” Musselman said. “He was part of the rotation last year and has now elevated his game as opportunity came.”

“Arians, he’s a lefty, he’s got great toughness,” Musselman said. “He can make open threes. He’s got a pull-up game off the bounce mid-range.

“Mayo is can create his own shot. He’s got deep, deep, deep range. Easley at the small forward spot can really shoot the ball.”

Appel, who missed the first two games this season because of an injury, played against St. Bonaventure and had nine points in 12 minutes off the bench.

After the game, South Dakota was scheduled to fly via charter to Fayetteville to play a second game in a 24-hour span.

“South Dakota State, you’re talking about a team that won 30 games last year,” Musselman said. “There’s not a lot of people that want to play them.

When Hofstra beat Arkansas 89-81 last season in North Little Rock, the Pride flew commercial flights and had travel issues because of weather and didn’t arrive until a few hours before tipoff.

“Like last year, we saw Hofstra fly into Little Rock the day of the game,” Musselman said. “But it didn’t really affect Hofstra too much. That was probably a game that we felt they were as ready to play against us as anybody that we played all last season.”

Freshman forward Kyle Williams is averaging 10.3 points for the Jackrabbits.

“Kyle is an excellent, excellent freshman,” Musselman said. “A high-level player. Their staff did a great job of recruiting a player that can be put in a starting lineup and can produce early in his career.”

Eric Henderson has a 70-23 record in his fourth season as South Dakota State’s coach.

The Jackrabbits played their first two games on the road and lost at Akron 81-80 in overtime and won 68-61 at Boise State when Dentlinger hit a layup with 1.3 seconds left.

“South Dakota State, they expose every defense,” Musselman said. “When you have such a proficient offensive system with players that really, really fit your scheme like South Dakota State, we just hope that we’re not exposed in areas.”