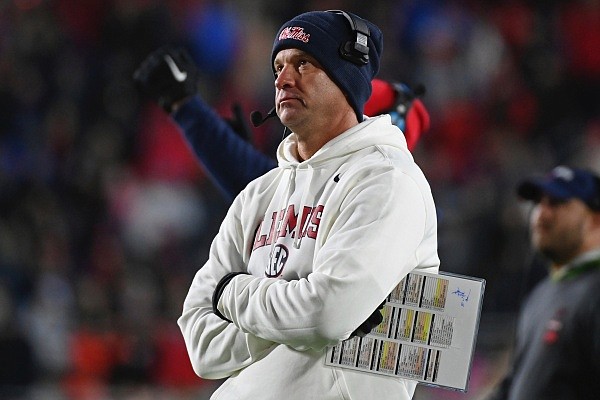 FAYETTEVILLE — The Arkansas Razorbacks got jubilant LSU in the cold last week after the Tigers notched an emotionally charged win over Alabama.

On Saturday, Arkansas will get Ole Miss in the cold after the Rebels’ deflating lost opportunity to upset Alabama.

Ole Miss first had to make peace with the 30-24 loss to its nemesis Crimson Tide, which came after a fourth- down throw in the end zone from the Alabama 20 fell incomplete with 46 seconds remaining, before recalibrating its sights on the Razorbacks.

“I was just frustrated for our players to be that close, to have the ball in your hands against Alabama, controlling the outcome,” Kiffin said. “If you take some time off the clock and score, you beat Alabama. That’s a rare thing.

“It doesn’t happen very often, and that’s why there was a lot of frustration.”

The Rebels were atop the SEC West just four weeks ago after winning their first seven games. Now they have losses to LSU and Alabama in the span of three games and are looking to charge toward the postseason at Arkansas’ expense.

Last year, Ole Miss outlasted the Razorbacks 52-51 by stopping a two-point conversion try with no time on the clock in one of the most entertaining games of the year. Arkansas quarterback KJ Jefferson accounted for 411 yards and six touchdowns in his first college start in his native Mississippi, and the teams combined for 1,287 yards, 611 by the Rebels and 676 by Arkansas.

Kiffin noted the Razorbacks are also coming off a difficult loss in a game they had chances to win.

“We’ve got to move on,” Kiffin said. “Arkansas is a very talented team that really in a lot of ways out-played LSU Saturday and really had a bunch of chances with backup quarterbacks to beat LSU. So that tells you a lot about how good they play at times.”

Ole Miss features one of the nation’s top offenses, a run-pass option scheme with a physical run game component, which Kiffin has credited is a branch from the Art Briles attack that Kendal Briles has put his own touches on as offensive coordinator at Arkansas.

The Rebels are 13th nationally in total offense with 485.5 yards per game, and they have one of the most balanced attacks in the country with an average of 259.6 rush yards and 225.9 pass yards per game.

Ole Miss and Arkansas are two of only five Power 5 teams in the nation to average 220-plus yards per game rushing and passing, along with Oregon, UCLA and Oklahoma. Group of 5 teams Central Florida and North Texas also produce to that standard.

Freshman running back Quinshon Judkins has been nothing short of a sensation. The 5-11, 210-pounder from Pike Road, Ala., became the fastest SEC freshman to hit the 1,000-yard mark since Florida’s Emmett Smith in 1987. Judkins surpassed Arkansas tailback Raheim Sanders for the SEC rushing lead after piling up 135 yards and two touchdowns against Alabama.

Judkins has 1,171 rushing yards and an Ole Miss record 15 rushing touchdowns. He and Zach Evans, a TCU transfer who has 692 rushing yards and seven touchdowns, have been one of the nation’s top tailback duos. However, Evans left last week’s game with a concussion and his status is questionable for Saturday.

Quarterback Jaxson Dart, a 6-2, 220-pound transfer from USC, has assumed the dual-threat role formerly occupied by Corral to good effect. He’s passed for 2,123 yards on 60.7% completions and rushed for 508 yards on 5.3 yards per carry.

Malik Heath (38 catches, 614 yards, 3 touchdowns) and Jonathan Mingo (37-723, 5) are Dart’s top targets and the strong collection of skill talent operates behind an offensive line that has earned the admiration of none other than Pittman, a guru in that department.

“I think they really are in sync,” Pittman said. “They’ve got those three veterans in there. Really are in sync together timing wise and they pull really well, run a lot of different offense. They just spread you out and they flood zones and different things.”

The Ole Miss defense has been gashed on the ground by a few teams, like Auburn (301 yards), Tulsa (262) and LSU (252), but the Rebels have been blitzing more lately (often on run downs) and rank third in the SEC behind Arkansas and Alabama with 28 sacks.

Defensive linemen Cedric Johnson, Tavius Robinson and Jared Ivey, linebacker Khari Coleman and defensive back Otis Reese all have three or more sacks in the Rebels’ 3-2-6 base alignment.

“Defensively, disruptive,” Pittman said of the Rebels. “They can get after the quarterback and have been blitzing more of late, I think more for the run game, trying to slow down opponents’ runs.