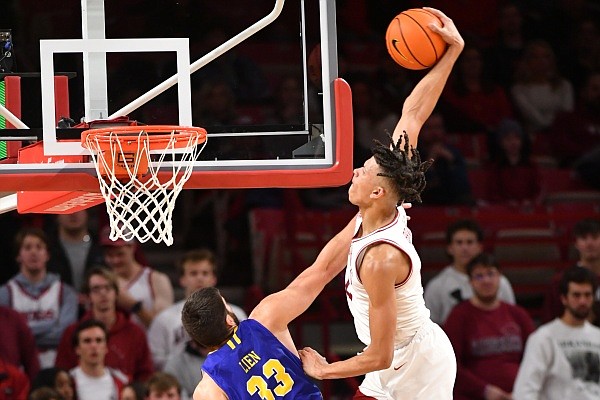 FAYETTEVILLE — As No. 9 Arkansas coasted to its third win of the season Wednesday against South Dakota State, Razorbacks forward Trevon Brazile became a viral sensation.

With 2:01 remaining in Arkansas’ 71-56 victory over the Jackrabbits, Brazile, the talented transfer from Missouri, caught a pass at the top of the key from freshman guard Derrian Ford. Seconds later, he semi-jogged in Ford’s direction, appearing as if he would complete a dribble handoff.

But he didn’t. The rest of the play can be found in short videos all across the Internet and on the timelines of many of the most high-profile names on social media.

Brazile, who finished the night with 13 points and 10 rebounds for his second double-double in three games as a Razorback, made Arkansas’ final bucket of the game as memorable as any in recent memory.

The 6-10 Brazile emphatically dunked over South Dakota State freshman forward Broden Lien with one hand. Bud Walton Arena became a madhouse in the moments that followed, with fans tapping the tops of their heads and reverting to the surrender cobra position.

Arkansas forward Kamani Johnson, too, tapped the top of his head in the on-court celebration then pointed in Lien’s direction. He was assessed a technical foul.

“I did tell the team in the locker room like, ‘Let's not give two points right back by getting the technical,’” Arkansas coach Eric Musselman said. “Like, let's act like we've seen that play before — not that we ever have — but let's act like we have.”

The clip of Brazile’s dunk quickly made the rounds. It was picked up by national outlets and brands such as SportsCenter, Bleacher Report and Sports Illustrated, and re-posted by the likes of Magic Johnson, LeBron James and Kendrick Perkins, an NBA analyst for ESPN who in 2012 was on the wrong end of a dunk by then-Los Angeles Clippers forward Blake Griffin.

The official Twitter account of the Maui Invitational, where the Razorbacks will play three games next week, quote tweeted a video of Brazile’s dunk and added the line, “Make sure this is packed in your suitcase for Maui.”

Musselman, when asked for his viewpoint of the dunk, said he learned the clip went viral from his daughter, Mariah.

Freshman guard Anthony Black, who was on the bench at the time of the dunk, said he came out of his seat — just like the rest of the players on the sideline — and briefly made his way onto the court at one point.

“The dunk was pretty crazy. That's all I've got to say,” Black said.

Junior guard Davonte Davis, who added 13 points on 5-of-10 shooting and 3 assists to go with 2 rebounds and 1 steal, said he was told by Musselman to get off the floor in the aftermath of the dunk.

“We see that all the time,” Davis said. “He does it in practice. If you do it in practice, it's going to show in the game. It shows who he really is and his potential.

“He can do things like that all the time, so as the season continues to go on, he will continue to make plays like that.”

Beyond the poster dunk and instant fame that followed, Brazile again provided 29 high-quality minutes for Arkansas. The Razorbacks outscored the Jackrabbits by 11 points in his run.

He is averaging 14 points and 10 rebounds per game. Musselman also gave the transfer props for his offensive output as the Razorbacks work to develop chemistry in the absence of freshman star Nick Smith.

On Wednesday, Brazile, who is 4 of 9 this season from three-point range after hitting his lone attempt against South Dakota State, came off the bench for the third consecutive game. It is a role that is suiting him just fine.

“I mean, to think that you can bring a guy off the bench and he can have the impact that he has…with him, our game elevates,” Musselman said. “I even thought the first half, I told the staff coming out that he didn’t play enough in the first half, and that was on me.”

Brazile already has a pair of 10-plus rebound games for Arkansas. He had one in 25 games at Missouri last season.

According to KenPom data, Brazile holds a defensive rebound rate of 26.7% this season. He has also grabbed 8.6% of the Razorbacks’ misses when on the floor.

“TB, he's been playing really hard and focusing on getting a lot of rebounds,” Black said. “I don't think he rebounded like that overseas, but he made that a focus of his.”