Get to know: 2025 target Terrion Burgess 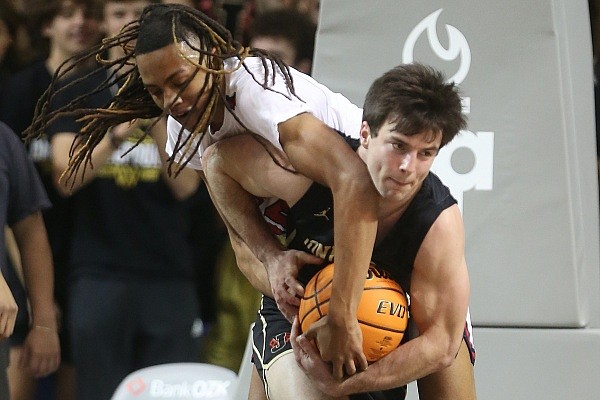 Marion's Terrion Burgess (left) fights for a rebound with Jonesboro's John Paul Pickens (right) during the second quarter of Jonesboro's 55-28 win in the Class 5A boys basketball state championship game on Thursday, March 10, 2022, at Bank OZK Arena in Hot Springs.

Benton’s Terrion Burgess is one of the nation’s top sophomore prospects and a major Arkansas target.

Burgess, 6-9, 200 pounds, visited the Razorbacks for the men's basketball team's Red-White Game on Oct. 16 and again on for the Fordham game last Friday.

He was the first prospect in his class to receive a scholarship offer from Razorbacks coach Eric Musselman in November. He also has offers from Ole Miss, Texas Tech, Texas A&M, TCU, Missouri and Auburn.

Burgess, who played at Marion last year, also played for the 15-under Arkansas Hawks in the spring and summer. One site, 247 Sports, rates him a 4-star prospect, the No. 5 power forward and No. 17 overall prospect in the nation in his class.

Coach Eric Musselman is: A great motivator. I love how he keeps his players engaged.

My mom is always on me to: Play harder

One rule change I would like to make in basketball: That’s a tough one. I’m not really sure. Maybe the three-second lane violation.

I will never eat: I’m not sure. I love food.

My favorite fast-food chain and why: Honestly, if they make a good sandwich, I almost eat them all.

My favorite sweet-tooth craving is: I’ll eat a snack cake every now and then.

If you could only eat one meal for the rest of your life, what would it be: Cheese dip and maybe chicken wings.

Three things you need while on a deserted island: Water, food and my phone

Favorite animal and why? Lions. They are the kings.

I’m terrified of: Losing the game of basketball

Cat or dog person and why: Dog, because they are smart and cool to have

My hidden talent is: I’m really good in mathematics

My dream date would be: That’s a tough one because there are so many amazing women that I would consider to be a dream date.

Hobbies: Just chilling with my friends.

The one thing I could not live without is: Basketball

If you were a superhero, what powers would you have: I would love to fly.

Role model and why: My parents, because they are great examples.

People would be surprised that I: Have a great sense of humor because I’m normally really quiet.