Hogs on roll, headed for Hawaii 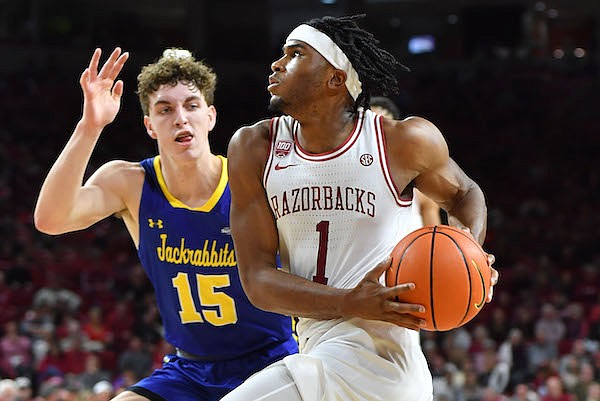 Arkansas guard Ricky Council (1) drives to the basket Wednesday, Nov. 16, 2022, past South Dakota State guard Tanner Te Slaa (15) during the second half of the Razorbacks' 71-56 win in Bud Walton Arena in Fayetteville.

FAYETTEVILLE — Before heading to Hawaii, the University of Arkansas men’s basketball team made sure to take care of the Dakotas.

The No. 9 Razorbacks beat South Dakota State 71-56 on Wednesday night at Walton Arena in their final game before playing in the Maui Invitational next week.

“Thank goodness for Ricky and for T.B.,” Razorbacks Coach Eric Musselman said. “Both of those guys right now are playing phenomenal.”

“I do know that because [my daughter] Mariah texted me.

“She wasn’t able to come to the game tonight due to dance class, and I got back and she had already texted about it. So I’m glad she was on point watching the game.

“It’s hard for someone 12 years old to come back from dance and watch, but she was very impressed with the dunk.”

Razorbacks forward Kamani Johnson was called for a technical foul for taunting after the dunk.

“I did tell the team in the locker room like let’s not give two points right back by getting the technical,” Musselman said. “Like, let’s act like we’ve seen that play.

“Not that we ever have. But let’s act like we have.”

Freshman forward Jordan Walsh added 10 points and 3 steals and hit 2 of 4 three-pointers. He was limited to 16 minutes because he suffered an ankle injury.

“Jordan knocking down two three-balls changes a lot of stuff for us offensively,” Musselman said. “I thought he was really good being aggressive. His shot selection was really good.

“Obviously there’s concern right now about his ankle, which is why I didn’t play him more. He was on pace probably to play 30-plus minutes.”

Arkansas freshman guard Nick Smith, a preseason first team All-SEC pick by the media and coaches, missed his third consecutive game as he continues to recover from a right knee injury, Smith watched the game sitting at the end of the Razorbacks’ bench.

Musselman said Smith — who did some shooting on the arena court after the game — still hasn’t practiced, though his knee continues to improve.

South Dakota State freshman William Kyle dunked on back-to-back possessions for the Jackrabbits to cut Arkansas’ lead to 31-27 and prompt Musselman to call a timeout with 2:28 left in the first half.

The Razorbacks responded by outscoring South Dakota State 10-0 over a 1:38 span.

“More energy on the defensive end,” Davis said of what triggered the run. “That’s what we are basically based on as a team.

“If we get stops, we can make runs. So Coach called timeout and chewed us out a little bit about playing defense harder, and you see we made that run and everything else took care of itself.”

Walsh started Arkansas’ run with a three-point basket to make it 34-27 with 2:13 left in the half. Brazile then made a steal and dunked.

Walsh had a pair of steals and Council scored on a drive for a 38-27 Arkansas lead. Walsh blocked a shot, Brazile got the rebound and senior center Mahki Mitchell had a three-point play to finish the run and put the Razorbacks ahead 41-27 with 35.8 seconds left.

“Jordan’s energy after that timeout kind of stopped [South Dakota State’s] run and gave us one of our own,” Black said. “So that was big for us.”

Sophomore guard Zeke Mayo’s driving basket with seven seconds left in the half pulled South Dakota State within 41-29 at halftime.

The Razorbacks then opened the second half by outscoring the Jackrabbits 11-1 run — including five points by Walsh — to move ahead 52-30 with 16:52 to play. Council capped the run with a windmill dunk on an assist from Davis.

The Razorbacks shot 45.9% (28 of 61) from the field, but had 20 turnovers to match what they forced against the Jackrabbits.

“Obviously 20 turnovers in a win is kind of unheard of,” Musselman said. “We got back to maybe a little bit of our problem overseas [during a foreign tour in August] turning the ball over.

“But they weren’t turnovers caused by defense. They were self-inflicted turnovers.”

Ten Razorbacks had at least one turnover.

“Taking care of the ball is something that we’re going to get better at,” Davis said. “It happens some games.”

South Dakota State (2-2) was playing its second game in 24 hours. The Jackrabbits beat St. Bonaventure 66-62 on Tuesday night in Sioux Falls, S.D., then flew a chartered flight to Fayetteville.

Mayo and senior forward Luke Appel each scored nine points to lead South Dakota. They’re among six key players back from a team that went 30-5 last season and made the NCAA Tournament.

“That’s a really good program,” Davis said. “They win games. We knew coming in they could shoot the ball pretty well. They also had dribble drivers and a few bigs that could post up and draw a lot of fouls.”

“Defense was the big emphasis on this game, and I think we did pretty well,” Davis said.

Arkansas led by as many as 27 points in the second half.

“We just took care of business,” Black said. “But a lot of respect for that team, too.”