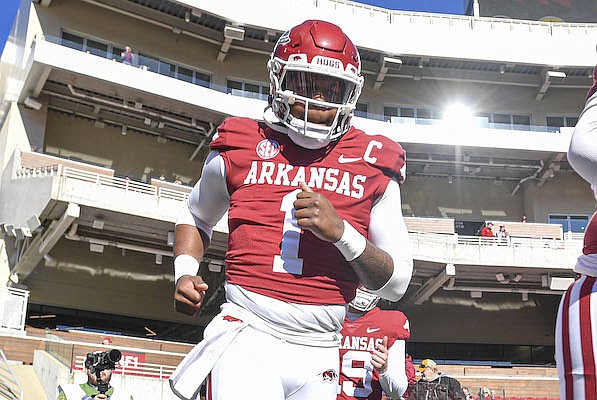 Arkansas quarterback KJ Jefferson runs onto the field prior to a game against LSU on Saturday, Nov. 12, 2022, in Fayetteville.

Asked Wednesday specifically about the health of Jefferson, who has been dealing with a right shoulder injury, Pittman said, “He’s practiced most every play this week, so I feel good about him. Dalton Wagner also has practiced a lot this week.

“So we’re probably about as healthy as we’ve been for a long, long time and certainly there’s some soreness in [Jefferson and Wagner], but that’s going to happen in Game No. 11 in our league. So I feel pretty good about all those guys.”

Both Jefferson and Wagner sat out last week’s 13-10 loss to LSU. Wagner had a back issue flare up, but he did media interviews Tuesday and pronounced himself “100% back.”

Ole Miss Coach Lane Kiffin said he’s expecting to see Jefferson, who racked up 411 total yards and six touchdowns in a 52-51 road loss to the Rebels last season, just down the road from his hometown of Sardis, Miss.

“I mean he’s obviously a problem because he’s so physical when he runs the ball,” Kiffin said. “He can make you miss, he can run you over. You know we had a major issue with him, especially later in the game as they’re moving the ball and making first downs. That system tires you out.”

Pittman said Jefferson’s leadership on the sidelines last week increased his esteem among players and coaches.

“It’s a huge deal because KJ is one of those leaders that leads the entire team, not just the offense,” Pittman said. “It’s big for us. We challenged him whenever we figured out that he wasn’t going to be able to play.

“Feleipe Franks did the same thing for him two years ago in [Jefferson’s] first start when we went to Missouri, and Feleipe was very encouraging and seeing things and talking to him on the sideline during that entire game. … I thought he was well into the game, focused, just unfortunately he wasn’t healthy enough to play.”

Wide receiver Warren Thompson has quit the football team, Coach Sam Pittman said on Wednesday’s SEC teleconference. Thompson, who had been suspended for an in-house disciplinary measure the first half of the BYU game on Oct. 15, left Monday’s practice and did not return.

The redshirt senior, who transferred in from Florida State prior to the 2021 season, ranks sixth on the team with 12 receptions for 178 yards and 2 touchdowns. His targets had gone down in recent games, with just four catches for 56 yards in the past five games, including shutouts against Mississippi State and LSU. Thompson’s touchdowns came on a 23-yard catch against South Carolina and a 56-yarder against Texas A&M.

The production of Matt Landers and Ketron Jackson Jr. in the wide spots had reduced Thompson’s playing time.

Nickel back Myles Slusher had been reinstated to the top defensive unit Monday, and now his suspension has been lifted by Sam Pittman.

“I have cut the suspension off of Slusher, so he has practiced this week,” Pittman said on Wednesday’s SEC teleconference.

Slusher, a junior from Broken Arrow, Okla., was arrested along with fellow defensive back Anthony Brown and charged with disorderly conduct after an incident with the Fayetteville Police Department in the early morning hours of Nov. 6 following the Razorbacks’ 21-19 loss to Liberty.

Arkansas wideout Jadon Haselwood has accepted an invitation to compete in the East-West Shrine Bowl, according to the Twitter account associated with the game.

Haselwood, a transfer from Oklahoma, is a redshirt junior, making him eligible to declare for the NFL Draft. The 6-3, 213-pounder leads the Razorbacks with 49 receptions, and he’s second with 592 receiving yards and third with 3 touchdowns.

The East-West Shrine Bowl, which benefits Shriners Hospitals for Children, has been around since 1925. This season’s game will be played Feb. 2, 2023, at Allegiant Stadium in Las Vegas.

Last year, Arkansas linebacker Bumper Pool accepted an invitation to the NFLPA Collegiate Bowl but elected to pass up the game and return for his super senior season.

Out of his Lane

Arkansas Coach Sam Pittman said he respected his counterpart Lane Kiffin for his outspokenness and his willingness to tease others, including his former Alabama boss Nick Saban, online.

Asked what he thought of Kiffin and what he adds to the league, Pittman said, “Well, I think it’s great. I wish that I had his … I don’t know how to say. It seems to me like he doesn’t really care what people think or say.

“All that kind of stuff, which is, by the way, really weird, that we have to do that. But he doesn’t, and honestly I admire that about him. He uses wit with it, as well, and things of that nature. I think all in all, he’s just being him and having a great time. I respect that, and I respect him.”

Freshman Quincey McAdoo has held up well in basically one and a half games of playing cornerback, paired with senior Dwight McGlothern. The Clarendon native, who signed as a receiver and had been playing special teams this season, had an interception and a pass breakup in the end zone in his first game and he held steady against LSU’s veteran wideouts last week.

“Yeah, he’s done a great job, playing as a freshman,” Ole Miss Coach Lane Kiffin said Wednesday. “I think he was a receiver before and really looks like a special player.”

Lane Kiffin said Monday that while his players didn’t seem bothered by the cold in last week’s 30-24 loss to Alabama, he had a real problem trying to stay warm.

Now he thinks he’s found a solution for the extreme weather expected Saturday night in Fayetteville, with temperatures likely to drop into the 20s.

Asked on Wednesday’s SEC teleconference how much winter gear he was packing for Fayetteville, Kiffin replied, “A lot. I’ve been in contact with Realtree, and they’re sending me heated hunting gear for underneath, so I’ll be prepared.”

Arkansas Coach Sam Pittman laughed when told of Kiffin’s bundling plan, and said he’s not expecting to do the same.

“Well, Lane’s built, you know, he’s a good-looking man,” Pittman said. “I don’t think I could add anything more in there and get my pants on. So probably not.”