Walsh at the heart of key moments in third win 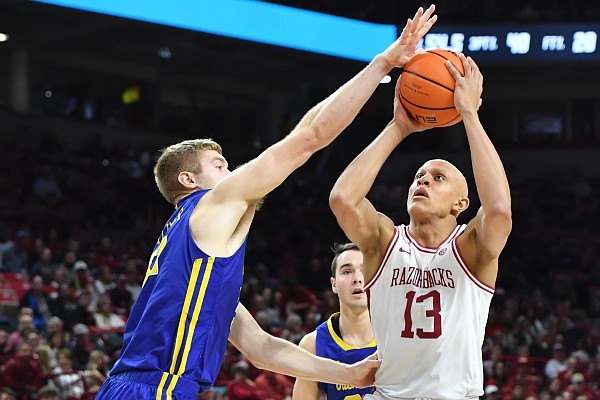 Arkansas wing Jordan Walsh (13) takes a shot in the lane Wednesday, Nov. 16, 2022, as South Dakota State forward Matt Dentlinger (left) defends during the second half of the Razorbacks’ 71-56 win in Bud Walton Arena in Fayetteville. Visit nwaonline.com/221117Daily/ for the photo gallery.

FAYETTEVILLE — Arkansas freshman Jordan Walsh was well on his way to his first big game statistically in a Razorbacks uniform on Wednesday.

But with 15:10 to play and Arkansas leading South Dakota State 52-32, the injury bug that bit Anthony Black, Ricky Council and Trevon Brazile in the season opener against North Dakota State last Monday got ahold of Walsh, too. He left the game with an ankle injury and did not return.

After being helped off the floor by head athletic trainer Matt Townsend and recruiting coordinator Ronnie Brewer, Walsh re-emerged from the team tunnel roughly 10 real-time minutes later and spent time on a stationary bike. He then found a place on the bench and watched the game’s final minutes.

“Obviously, there’s concern right now about his ankle,” Razorbacks coach Eric Musselman said, “which is why I didn’t play him more. He was on pace, probably, to play 30-plus minutes. Unfortunately, he did get hurt.

“He was playing really, really good.”

Walsh, a 6-7 wing from Desoto, Texas, was one of Arkansas’ most influential players in its third win of the season and final tuneup ahead of next week’s Maui Invitational. And he served as the heartbeat in both of the key runs that aided the Razorbacks in pulling away from the Jackrabbits, who were playing their second game in as many nights.

Late in the first half, after Arkansas gave up a 10-3 run to South Dakota State that pulled it within 31-27, Musselman, in rare fashion, called a timeout. Out of the short break, Walsh got the Razorbacks in gear.

He kickstarted a 10-2 burst to close the half with a three-pointer, then in a span of 1:01 tallied 2 steals, 1 block and 1 assist. While his perimeter jumper gave Arkansas an offensive boost, more impressive and on full display was his pure, natural defensive instincts.

Walsh twice stripped the ball from 6-9 Jackrabbits forward William Kyle around the rim, then he turned away an interior look by guard Zeke Mayo. Arkansas scored on its ensuing possession after the second steal and the block.

Walsh’s assist in the stretch came on an and-1 by forward Makhi Mitchell. The Razorbacks, at that point, had their largest lead of the night at 41-27.

After halftime, he scored five of the first eight points in an 11-0 run that blew the game open.

“Jordan was awesome,” Musselman added. “For his productivity in those 15(-plus) minutes, I mean, that's what we need from him. I thought he was aggressive, I thought he played with toughness.

“I thought he was extremely focused. I thought Jordan played great. I really did.”

On Wednesday, Walsh recorded three steals against the Jackrabbits. He did not have one in 39 minutes played in Arkansas’ first two games.

Should he be healthy moving forward and continue to defend without fouling, his defensive potential could be limitless. He did not commit a foul in his run against the Jackrabbits after fouling out of the season opener in 18 minutes and being whistled for three last Friday against Fordham.

The Razorbacks outscored South Dakota State by 21 when he was in the lineup. They were outscored 40-34 in his time off the floor.

More from WholeHogSports: 6 keys to victory in Arkansas' football game against No. 14 Ole Miss on Saturday

According to CBB Analytics, Arkansas has a defensive rating of 61.4 in Walsh’s 55 minutes this season. That figure moves to a still-stellar 83.9 in his 65 off-court minutes.

“In those runs, his defense was crazy,” freshman guard Anthony Black said. “He was getting the ball and we were getting run-out layups, dunks. His energy was just…It’s been at an all-time high.

“But today, during those two runs, it was special energy.”

Walsh, too, in a starting role, was the Razorbacks’ best source of perimeter shooting in the win, finishing 2 of 4 from three-point range. When he knocked down his second triple with 17:43 to play, the Razorbacks were 6 of 13 beyond the arc.

CBB Analytics also shows Arkansas’ offensive rating is 110.3 in his time on the floor this season, and 93.7 when out of the lineup.

“Not many guys can do what he can do,” guard Davonte Davis said. “He can shoot the ball, slash, he can dribble-drive off the closeout (at) the three-point line and things like that. He puts a lot of pressure on the defense.

“I think that Jordan does a lot of things that you can’t teach.”