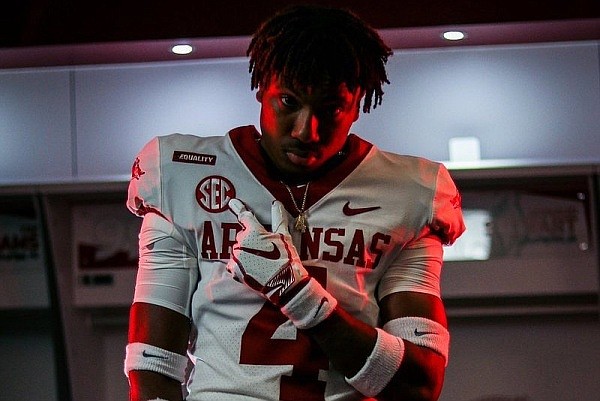 Another impressive list of prospects are expected to visit Fayetteville for Arkansas' last home game of the season against No. 14 Ole Miss on Saturday.

Major targets and teammates Michael Hawkins, a quarterback, and tight end Davon Mitchell of Allen, Texas, are expected visit for the second consecutive weekend. The trips to see the Razorbacks would be their fourth since the summer.

Hawkins, 6-2, 185 pounds, has offers from Arkansas, Oklahoma, Michigan, Alabama, North Carolina State, Virginia Tech and other schools. ESPN rates him a 4-star prospect and the No. 6 dual-threat quarterback in the nation.

He is the No. 1 tight end and No. 29 overall prospect in the nation in the 2025 class, according to 247 Sports. They are two of about 60 prospects expected to see the Razorbacks against the Rebels.

Sanford, 6-3, 240, of Oxford, Miss., visited for the Liberty game while Geffrard, 6-6, 365 pounds, of Mableton (Ga.) Whitefield Academy, will be making his first trip to Fayetteville since his June commitment.

Arkansas pledges Carson Dean, Jaylon Braxton and Quincy Rhodes are expected to be on hand, too.

Valley View and 2024 linebacker target Brian Huff, 6-3, 228, could be in Fayetteville on Saturday. If he does make the trip, it would be his third Razorbacks game of the season.

Arkadelphia senior quarterback Donovan Whitten, 6-3, 220, recently received a preferred walk-on offer at linebacker from the Razorbacks and will be visiting.

Highly regarded freshman defensive back Keenan Harris, 6-1, 194, of St. Louis University, will be the third prospect from his high school to visit Arkansas this season.

Hafer is an On3.com 3-star recruit who has offers from Missouri, Iowa State, Kansas State and Kansas, and Alexander holds an offer from Tulsa.

He is a 4-star prospect, according to Rivals.

Carter has early offers from Arkansas, Florida State and other schools.

Running back Raycine Guillory, 5-9, 165, of Mansfield (Texas) Lake Ridge, is another freshman prospect with offers from SMU and Texas Tech who is expected to be in Fayetteville.

Senior long snapper Max Schmidly, 6-3, 200, of Charlotte (N.C.) Myers, will be visiting the Razorbacks for the second time.

Junior kicker Connor Hawkins, 6-1, 160, of Liberty, Texas, is also planning to visit. Chris Sailer Kicking rates him the No. 8 kicker in the nation in his class.

Class of 2026 offensive linemen Breck Kolojay, 6-5, 265 of Highlands Ranch, (Colo.) Valor Christian is expected to be on hand.

Several prospects from Maumelle are slated to visit: