Black more than sets the table for Hogs 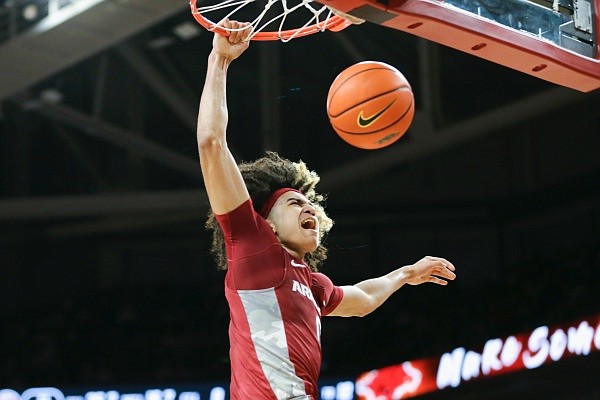 Arkansas guard Anthony Black dunks on Friday, November 11, 2022 during the first half of a basketball game against Fordham at Bud Walton Arena in Fayetteville.

FAYETTEVILLE — Anthony Black, a McDonald’s High School All-American, might not lead the Arkansas Razorbacks in scoring in any games this season.

The 6-7 freshman guard from Duncanville, Texas, is averaging 6.0 points through three games to tie for sixth on the team.

“Just because he wasn’t scoring, that doesn’t mean anything,” University of Arkansas sophomore forward Trevon Brazile said after Black had three points on 1-of-7 shooting in his college debut against North Dakota State on Nov. 7. “He affects the game in many other ways than that.”

Black finished with 7 rebounds, 3 assists and 3 steals in 30 minutes in the Razorbacks’ 76-58 victory over the Bison.

When No. 9 Arkansas beat South Dakota State 71-56 on Wednesday night, Black filled up the box score again with 5 points, 5 rebounds, 5 assists and 4 steals in 29 minutes.

“I think defensively, Anthony’s been a 10 out of 10,” Razorbacks Coach Eric Musselman said. “It’s really hard for people to get three-balls off over him because of his length. He’s doing a great job of sliding and moving his feet.

“One of the things that we talked about with a guy 6-7 defending point guards, maybe it’d be a struggle to keep guys in front of him for a time. But defensively, he’s been great.”

More from WholeHogSports: Jordan Walsh was at the heart of the key moments in Arkansas' third win

Black hit 2 of 3 shots against the Jackrabbits, including 1 of 2 three-pointers.

“I thought it was by far his best offensive game,” Musselman said. “A lot of point guards at all levels, it’s a hard thing [deciding], ‘When do I shoot? Am I going to be aggressive? Am I trying to get my teammates involved?’

“By nature, A.B. wants to be a pass-first guy. But we’re going to need him to get downhill some and we’re going to have to continue to come up with different play patterns that can help him be a little bit more aggressive offensively. But knocking down the three, big step in the right direction.”

Black is averaging 6.0 rebounds, 3.0 steals and 2.7 assists per game with 2 blocked shots

“Man, he’s a Swiss Army knife,” Arkansas senior forward Kamani Johnson said. “He can do it all.

“He’s not a score-first person. Sometimes I’ll have to remind him, ‘A.B., we need you to go get a bucket, too,’ because he’s just focused on doing everything else. He sets the table, he rebounds, he defends.”

Black also dunks impressively enough that a slam he had in Arkansas’ exhibition game against Rogers State was ranked No. 8 on ESPN SportsCenter’s top 10 plays.

“To make SportsCenter your first time out on a college court is a pretty special thing to do,” Johnson said. “I don’t even think he realizes how special that is, and maybe that’s a good thing.

“He’s super humble. He works on his game a lot. I think you’ll see a lot more highlights from him this year.”

Freshman guard Nick Smith, one of three McDonald’s All-Americans for the Razorbacks along with Black and freshman forward Jordan Walsh, hasn’t played this season as he recovers from a right knee injury.

“I think I’ve done a good job at doing what the team needs this year,” Black said. “I feel like since Nick hasn’t been playing, I should be a little more aggressive.

“But at the same time I’m just taking what the defense gives me. I’m trying to help rebound a lot and play defense.”

Junior guard Davonte Davis is Arkansas’ most experienced player in Musselman’s system in his third season at Arkansas.

“As a freshman coming in, [Black is] learning new drills, new plays, new system at a higher level,” Davis said. “So it’s going to be difficult at times for the freshman, including Anthony.

“It’s difficult for me sometimes. As a player who’s been here, I think he’s learned pretty well, learned pretty fast and I think that’s going to continue to happen.

“His game’s going to, of course, continue to expand as the season goes on.”

South Carolina freshman forward GG Jackson was Black’s teammate on Team USA, which won the gold medal at the FIBA U18 Americas Championship in June at Tijuana, Mexico.

“Anthony’s probably one of the best facilitators in college basketball right now as a freshman,” Jackson said at SEC Media Day. “His size is a big factor in his game, and he’s super athletic.

“I think people sleep on his athleticism. He definitely can get up.”

Starting with Arkansas’ four-game exhibition tour in Spain and Italy in August, Black showed he can get assists on lob passes for dunks or catch them and finish at the rim.

“He thrives off passing the ball, so he’s going to be one of the assists leaders in the country.”