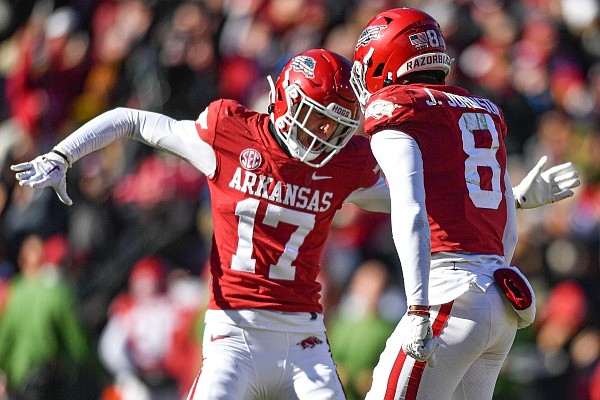 FAYETTEVILLE — The Arkansas defense, decimated by injuries and picked apart by some of the SEC’s top offenses and BYU this season, has gained momentum and confidence by allowing just 13 points over the past six quarters.

The Razorbacks are going to need it heading into Saturday’s home finale on senior night against No. 14 Ole Miss, which ranks 13th in the nation in total offense.

The Rebels have a powerful, balanced attack that mirrors the Razorbacks’ own in many ways, with a dual threat quarterback in Jaxson Dart and ace freshman tailback Quinshon Judkins operating behind a powerful offensive line.

The Arkansas defense has allowed one touchdown in the past six quarters and has 11 sacks in the past two games to re-ignite a trend the unit had going early in the season, when it led the nation in sacks for a couple of weeks.

“Defensively, in the last six quarters, we’ve tackled better,” Arkansas Coach Pittman said on his radio show Wednesday. “With us getting our injuries less and less, I think that’s built confidence in the guys on defense with each other.”

The emergence of freshman Quincey McAdoo at cornerback to pair with Dwight McGlothern has given defensive coordinator Barry Odom more latitude to call blitzes and run man coverage. Odom has worked the past five games from the sidelines to better make adjustments face to face with a unit that has had tons of personnel changes.

Arkansas shut out Liberty in the second half during a 21-19 loss on Nov. 5, then allowed only one touchdown — on a 40-yard drive following a failed fourth down attempt — and two field goals after drives of 17 and 61 yards in a 13-10 loss to LSU.

More from WholeHogSports: 6 keys to Arkansas' game against No. 14 Ole Miss

“I think that we just continue to grow as a defense,” Arkansas linebacker Bumper Pool said. “We got hit with some injuries early on in the year and then we kind of changed some things up with running our defense. Kind of getting our D-line to slant some more.”

“Just playing real physical and getting off blocks,” Hampton said on the “Sam Pittman Live” radio show of the recent resurgence. “That’s what we’re doing as a group and that’s helping us make plays and being all over the place.”

The run on injuries in the secondary, which took out safety Jalen Catalon and cornerback LaDarrius Bishop in the first two weeks and has sidelined or slowed Myles Slusher, Malik Chavis, Latavious Brini, Khari Johnson and Jayden Johnson, sent Odom and cornerbacks coach Dominique Bowman scrambling to find answers.

Starting cornerback Hudson Clark has become a playmaker at safety, where he had a key interception during a big second quarter in a win at BYU. The secondary has had its depth tested and seems to be finding its legs late in the season.

“We had some additions, like Quincey coming in, adding some help at the corner position, moving Hud to the middle safety,” Pool said. “I think everyone just kind of found their groove. I think whenever you have corners that can really lock down, it helps you be more aggressive, and whenever we can pressure the quarterback, I think that’s when we’re best.

“So … one touchdown the past six quarters is something we’re proud of. But we have a lot more to prove and I think we have two really good opponents left to prove it.”

More from WholeHogSports: The final step has been the hardest for the Razorbacks

The Rebels will counter with a group, albeit featuring mostly new skill players, that gobbled up 611 total yards, 324 rushing and 287 passing, in a 52-51 win over Arkansas last season.

“He’s a really good player,” Saban said. “They’re tough when they spread you out wide with four receivers and they run the ball well. They have such good backs. He’s an outstanding player: Fast, physical, can make you miss, hard to tackle. You have to stay in nickel, you can’t really stay in dime because you can’t stop the run and you can’t really match up on the passes.”

Pool said the Razorbacks have been rallying to the ball better of late and need to keep it up to compete with the Rebels.

“Whenever you have everybody running to the ball, that’s kind of a staple that we’ve had whenever we’re playing our best ball,” he said. “But then again, our defense is completely different in a way. We’re getting to the quarterback, we’re getting a lot of sacks, a lot of pressure.

“And we have guys covering really good receivers in the SEC. So if we can just continue to take some of that identity of the past and build it off what we’ve built this year, that just kind of leads you to more success in the future.”