Hogs say they hit the jackpot with Haselwood 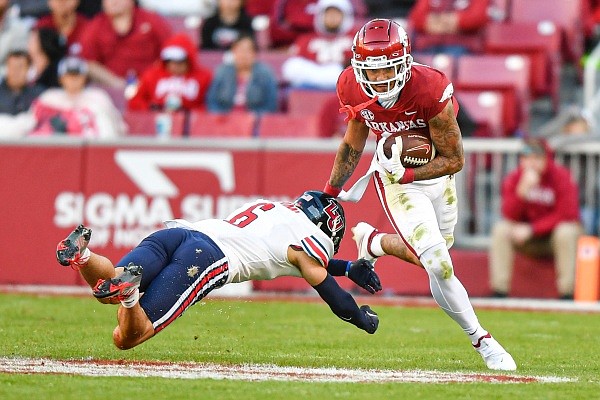 Arkansas wide receiver Jadon Haselwood on Saturday, Nov. 5, 2022, during the fourth quarter of the Razorbacks’ 21-19 loss to Liberty at Reynolds Razorback Stadium in Fayetteville.

FAYETTEVILLE — Ask those who are inside the Arkansas football program on a daily basis what wide receiver Jadon Haselwood has brought to the Razorbacks and you’re likely to hear varying answers.

It is not that the responses are inconsistent or in any way insincere. The Oklahoma transfer’s impact has simply been vast and wide-ranging, touching a number of areas of need Arkansas’ staff identified following the team’s 9-4 season in 2021.

Ten games into his debut season with the Razorbacks, Haselwood has served as a go-to receiver for each of Arkansas’ quarterbacks. His 49 catches are 12 more than the second most on the team, and his 592 yards are just shy of 200 more than he accumulated between 2019-21.

And then there are the intangibles — things that cannot be coached or taught. The Razorbacks considered his commitment last December a crucial win for the future for those reasons.

Eleven months later, Arkansas still feels similarly. And it believes he can assist the Razorbacks in becoming bowl eligible for the second consecutive season with a victory over Ole Miss or Missouri in the final two weeks of the regular season.

“Very excited about him,” Arkansas coach Sam Pittman said last week on the SEC coaches teleconference. “You know, sometimes the change helps kids, and, certainly, sometimes it doesn’t. But I just felt like through his work ethic, we could make him comfortable with myself and (running backs) Coach (Jimmy) Smith being here.

“And I just thought we would hit the jackpot if we were able to get him. In our opinion, we certainly have.”

More from WholeHogSports: 6 keys to Arkansas' game against No. 14 Ole Miss on Saturday

Haselwood’s teammates and coaches in recent weeks have lauded his toughness, perspective, energy and passion. The toughness piece was on display during Arkansas’ loss at Mississippi State on Oct. 8.

After a long reception from quarterback Malik Hornsby, Haselwood rose to his feet and ran to the sideline favoring his shoulder. Following the game, he mentioned he has been battling an AC joint sprain. He had a career-high 113 receiving yards against the Bulldogs.

Haselwood has caught 22 passes for 228 yards and 1 touchdown since that game.

Tight end Trey Knox, who battled a hip issue early in his Arkansas career, concurred. He understands the difficulty in attempting to perform at a high level with an at-times debilitating injury.

“Just bringing in another guy that knows how to win and knows what it takes to win (was key),” he said. “And he’s a guy that’s going to give great effort every day no matter how he feels.

“He’s going to go out there and play his tail off.”

The perspective aspect comes from being a part of and playing on teams that have experienced both regular-season and post-season success. In 2019, Haselwood caught 19 passes for 272 yards and 1 touchdown on a Sooners team that won the Big 12 championship and lost to LSU in the College Football Playoff at the Peach Bowl.

His impact was limited in 2020 as he worked to recover from an ACL injury, but he returned to lead Oklahoma in catches (39) and receiving scores (6) the following season. Initially, missing time because of the injured knee placed Haselwood in a dark place mentally, according to an interview on “The Hog Pod with Bo Mattingly.”

More from WholeHogSports: Jordan Walsh was at the heart of key moments in No. 9 Arkansas' win over South Dakota State

But he grew from that struggle and learned to block out the outside noise and focus on himself and the ways he could influence winning football.

Last year when the Sooners finished 11-2 and with a win over Oregon in the Alamo Bowl, he caught more than three passes in four games. At Arkansas, as a focal point in the passing game, it has happened eight times, including four consecutive games entering this weekend’s meeting with the 14th-ranked Rebels.

“He won a lot of games when he was there,” Knox said. “(He brought) that winning culture here. You know, I’m an older guy. We’ve had one season of winning, and my freshman season wasn’t too hot. He’s been at a school that’s won a lot of games.”

Much in the same way LSU transfer cornerback Dwight McGlothern’s confidence and swagger have elevated those around him, Haselwood’s experience has been a plus. Simeon Blair, a captain and starting safety, added that the receiver’s talent and competitive nature have improved the play of the secondary.

Pittman has watched Haselwood make offensive playmakers better. Treylon Burks, the Razorbacks’ No. 1 receiver in 2021 and a first-round pick of the Tennessee Titans this spring, was influential in that way, he added.

“I think he’s really helped the wide receiver room,” Pittman said. “The kids grow up. I think we are a better room because Haselwood is here. I believe that. I think we’re a better room. I think Ketron Jackson is better this year because of Haselwood. I do.

“Obviously, there’s a competition part of that, but Haselwood has just got that ‘it’ factor and has for as long as I’ve known him. He has done a wonderful job of being a team leader.

“It’s very hard to be that way in one year.”

The jolt provided by Haselwood in the passing game — 13 catches and 2 touchdowns in the first 3 games — was felt almost as quickly as his recruiting process with Arkansas went down. Pittman recently recalled seeing the Cedar Grove (Ga.) High School standout regularly on Georgia’s campus when he served as the Bulldogs’ offensive line coach.

More from WholeHogSports: Hogs' defense has more to prove after impressive six-quarter stretch

Pittman had a strong relationship with Jimmy Smith, who was Haselwood’s prep coach at the time, as a result of recruiting a couple of offensive linemen at the school. When the two learned Haselwood was in the transfer portal, Pittman asked Smith if the Razorbacks had any shot at landing him.

“I said, ‘Well, holler at him and see if he’d be interested,’” Pittman said. “And, to be perfectly honest with you, we went out there to Atlanta, and we brought him in. It was over about as soon as it started.

“We needed wideouts, and we had Jimmy Smith. Everybody else didn’t. And that’s what happened.”

Haselwood leads the Razorbacks in yards after catch with 315, according to Pro Football Focus. Running back Raheim “Rocket” Sanders is second with 231.

“To the entire team, I think that he brings that toughness, the competitiveness because he’s been hurt, as well, but he doesn’t miss anything,” Pittman said. “He’s brought a lot to us in intangibles.

“I’m really, really happy that he’s on the team.”