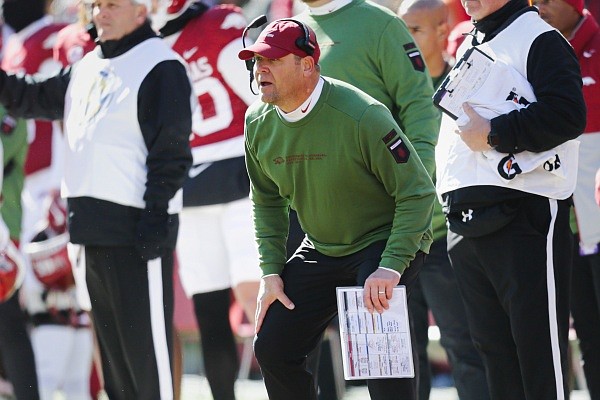 Arkansas defensive coordinator Barry Odom reacts on Saturday, November 12, 2022, during the second quarter of a football game against LSU at Reynolds Razorback Stadium in Fayetteville. Visit nwaonline.com/221113Daily/ for the photo gallery.

FAYETTEVILLE — The Arkansas Razorbacks’ sack count, which hit a lull in the middle of the season, is on the rise again, which has Razorbacks Coach Sam Pittman feeling better about the defense heading into the final two games.

The Hogs had an FBS-best 20 sacks through four games, only one in a three-game span against Alabama, Mississippi State and BYU, and now 14 in the last three games. The Razorbacks lead the SEC and are fourth nationally with 35 sacks.

“I think we were more aggressive early in the year,” Pittman said. “I think some of our injuries in the secondary might have dictated a little bit in that middle part and who we’re playing and how their protection is. There’s a lot of things that go into that.

“Obviously, we’ve been a lot more aggressive the last couple of weeks, and it has helped us. … I do think our kids Saturday changed their mindset … and they said ‘I’m going to sack the quarterback,’ and that’s one of the things we harped on last week.”

The Razorbacks had seven sacks against LSU, their second-highest total of the year behind their eight against Missouri State.

Another factor in Pittman’s view: Defensive coordinator Barry Odom’s presence on the sideline.

Odom has remained on the sidelines for the last five games after first coming down from the press box for the Hogs’ 40-17 loss at Mississippi State on Oct. 8.

Pittman said clearer communication to the entire defense, which has been beset by injuries in the secondary, was one of the reasons Odom came down from the sky view.

“Part of that certainly is being present,” Pittman said. “The kids have a lot of respect for him. If he’s up there, he’s away from them. Now, we won nine games last year with him upstairs.

“I think we decided that with him on the sideline, he could explain the changes — like, we changed our unbalanced formation Saturday.

“I think we thought that his presence on the sideline and his ability to make changes himself, besides through the headsets, I thought we needed that. And we felt like it would help us. So that was probably the original reason why we asked him to come down.”

Formerly the head coach at Missouri (2016-19), Odom worked from the sideline just once in his first two seasons with Pittman. That came when he served as interim head coach for a 63-35 loss at Florida in 2020 when Pittman was in quarantine due to covid-19.

“I like it,” defensive end Zach Williams said. “He’s our defensive coordinator, and he just brings a certain fire. … So when you have the D coordinator coming down, jumping on everybody, just saying ‘Good job,’ it really cheers you up, to be honest with you.”

“He brings great energy,” Pool said. “He does a great job about making adjustments, coming up to us, looking us in the eyes and giving us exactly what we need to do. I think our defense has responded to it, especially our defensive backs. Like Zach said, his energy down there is infectious.”

Ole Miss is not far behind the Razorbacks in sacks with 28 to rank 25th in the nation and third in the SEC behind Arkansas and Alabama (32).

Like the Razorbacks, a lot of players have gotten in on the sack attack, with 13 defenders registering at least a half sack.

“On the edge they’re very sound rushers,” Arkansas offensive tackle Dalton Wagner said of ends Cedric Johnson (4 sacks) and Tavius Robinson (4). “Between both of them, I think that their strength lies in their ability on the interior to push the pocket back.

“That nose guard in there [6-2, 315-pound JJ Pegues], he’s a big dude. He’s really strong too. And where they create problems is they try to mess with your ‘Mike’ points, and they try to push the pocket back so it shortens the edges for the tackles.”

Arkansas and Ole Miss have a long-running dispute on the all-time series record.

At issue is the 1914 game in which Arkansas claims a 1-0 win for the Rebels’ use of an ineligible player. Ole Miss claims a 13-7 win in that game, which was played in Little Rock.

Center Ricky Stromberg comes across in media interviews as a no-nonsense kind of guy, but his teammates say the senior from Tulsa can be quite the riot.

“Ricky’s a character you know,” senior tackle Luke Jones said. “He’s one of our really good friends and we love him. He’s a great person on the field as well as off the field.”

Added tackle Dalton Wagner, who has been in the starting lineup with Stromberg for most of the last four years, “He’s got kind of a poise to him when he’s out on the field. He’s so fast with the ‘Mike’ points, he makes everything really quickly. And I think the best thing about it is how much he cares about the success of the O-line is what drives us all to play as hard as we can as well.”

Arkansas has also been out-possessed by opponents, with an average time of 29:20 to rank 9th in the SEC and 81st in the country.

Ole Miss, ranked No. 14 by the College Football Playoff committee, The Associated Press and the USA Today Coaches poll, represents the seventh ranked opponent faced by the Razorbacks, including their fifth in six games against SEC West teams.

Two other Arkansas opponents — South Carolina and BYU — were ranked after or before playing the Razorbacks. The only team Arkansas has faced this season which has not been ranked on either the FBS of FCS level has been Auburn.

Alabama was ranked No. 2 in the AP Top 25 when facing the Hogs, LSU was No. 7, and Cincinnati, Texas A&M, Mississippi State and Liberty were all No. 23. Missouri State was No. 5 in one of the FCS polls when the Bears lost 38-27 at Arkansas.

Arkansas failed on both its fourth-down tries against LSU to fall to 9 of 20 (45%) on the season. That rate is good for 91st in the FBS.