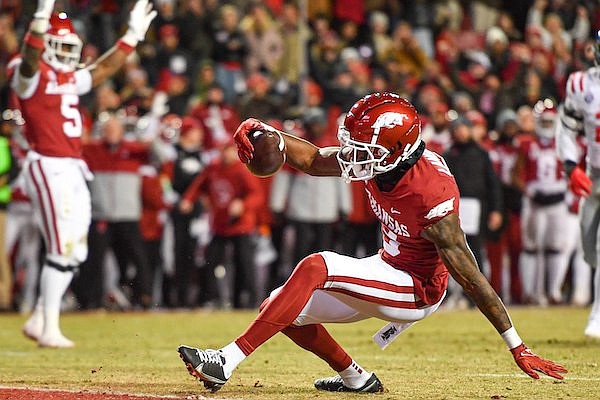 Arkansas receiver Matt Landers celebrates a touchdown catch during a game against Ole Miss on Saturday, Nov. 19, 2022, in Fayetteville.

The Razorbacks won 42-27 in front of an announced attendance of 71,365 on a cold night at Reynolds Razorback Stadium. The temperature at kickoff was 34 degrees and fell into the 20s by game’s end.

Ole Miss scored three touchdowns in the fourth quarter after trailing 42-6. The Rebels finished with 703 yards — the third most ever allowed by an Arkansas defense — but also committed 12 penalties for 116 yards, 3 turnovers and missed a short field goal attempt.

Quarterback KJ Jefferson returned from a shoulder injury that sidelined him last week to boost the Razorbacks’ offense with 168 passing yards and 47 rushing yards against his home-state team. Jefferson grew up in Sardis, Miss., about 30 miles from the Ole Miss campus in Oxford.

Arkansas (6-5, 3-4 SEC) snapped a two-game losing streak on its home field — losses to Liberty and LSU by a combined five points in games that Jefferson either did not play or played at less than full health. Jefferson is 6-3 as a starter this season.

The Razorbacks built a 35-6 halftime lead when running back Raheim Sanders ran for an 8-yard touchdown with 5 seconds remaining in the second quarter. It capped Arkansas’ best first half against an SEC team since 2016, when the Razorbacks scored 38 points before halftime at Mississippi State.

Sanders added a 68-yard touchdown run on the second play of the third quarter to give Arkansas a 42-6 lead. The sophomore did not touch the ball again until the fourth quarter and finished with 232 rushing yards and 3 touchdowns on 24 carries. Sanders also had five receptions for 29 yards.

His rushing total was the fifth highest in program history and third most by a Razorback in an SEC game. Darren McFadden rushed for 321 yards against South Carolina in 2007 and Fred Talley rushed for 241 yards at Auburn in 2002.

Jefferson threw touchdown passes of 8 and 23 yards to Matt Landers in the first quarter, and 20 yards to Ketron Jackson early in the second quarter to give the Razorbacks a 21-3 lead.

Ole Miss (8-3, 4-3) had two touchdowns called back in the first half because of holding penalties against its offensive tackles. Right tackle Micah Pettus was flagged for holding Dorian Gerald to erase a 33-yard touchdown pass from Jaxson Dart to Dayton Wade on a fourth down in the first quarter. The Rebels opted to punt, which set up Jefferson’s second touchdown pass to Landers that gave the Razorbacks a 14-0 lead.

A 15-yard pass from Dart to Jordan Watkins in the second quarter was called off when left tackle Jayden Williams was called for holding Zach Williams. The Rebels settled for a 32-yard field goal by Jonathan Cruz with 4:38 left before halftime to cut Arkansas’ lead to 21-6.

Sanders scored twice in the closing minutes of the half. His 20-yard touchdown run gave the Razorbacks a 28-6 lead with 2:20 to play in the half, and his second touchdown run was set up when linebacker Drew Sanders intercepted Dart and returned the ball to the Ole Miss 48 with 1:07 remaining.

Drew Sanders also had a fumble recovery in the first quarter and led Arkansas with 10 tackles.

Ole Miss, which averaged 36.1 points per game beforehand, did not score its first touchdown until Quinshon Judkins’ 1-yard run with 14:02 to play in the fourth quarter.

Judkins rushed for 214 yards on 24 attempts to keep a narrow lead over Raheim Sanders for the SEC lead. Judkins led Sanders by 22 yards coming into the game.

Ole Miss rushed for 463 yards on 53 attempts. Zach Evans’ 48-yard touchdown run with 8:02 remaining pulled the Rebels to within 42-20 after a successful two-point conversion.

Ole Miss scored its final touchdown with 2:55 remaining on a 13-yard touchdown pass from Dart to Malik Heath, who had 140 yards on 9 receptions.

Landers, Jadon Haselwood and Trey Knox each had 3 receptions for the Razorbacks, and finished with 38, 36 and 34 yards, respectively. Jefferson completed 17 of 22 passes.

Dart was 21-of-36 passing for 240 yards for the Rebels, who lost their fifth consecutive game in Fayetteville.

Arkansas is scheduled to conclude its regular-season schedule with a game at Missouri on Friday at 2:30 p.m.