Never boring when Arkansas, Ole Miss get together 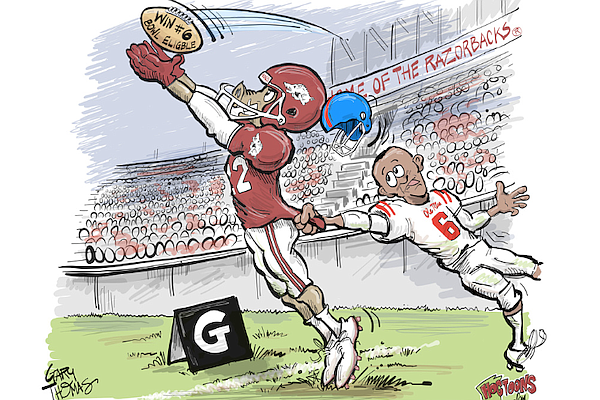 FAYETTEVILLE — Could the Arkansas Razorbacks and Ole Miss Rebels be on a collision course for another instant classic today?

Recent results, the long-term history of the rivalry, wildly productive offenses and sack-heavy defenses on both sides suggest the Razorbacks and Rebels could be in store for another memorable rock-‘em, sock-‘em track meet.

Ah, but Mother Nature could have a say in that shootout theory.

Third-year Arkansas Coach Sam Pittman showed his players a big hog slopping around happily in the mud prior to a strong performance in the rain at Auburn three years ago, and he thinks the players will be ready for the frosty proceedings tonight.

“We are the Hogs. We’re going to embrace it,” Pittman said on his radio show this week.

In fact, he wants cold in the extreme.

“We’re rooting for a freeze out if we can get it,” he said.

“Whenever you can have a game when the weather is down in the 20s, it comes[down] to a game of wills,” Arkansas linebacker Bumper Pool said. “On a senior night in our stadium, I think that we’re going to have a lot of fight and a lot of will.”

Pittman’s counterpart Lane Kiffin, also in his third season, said he struggled to get warm in last Saturday’s 30-24 home loss to Alabama. But he thinks he’s hit on a solution, as an outdoor apparel outfit had rigged him up with heated gear to wear under his coat.

“I think our players are good,” Kiffin said. “I’m the issue. I’ve tried everything. I was freezing during that [Alabama] game.

“So I have cold-weather issues. Luckily I don’t think our players do because I didn’t see that at all out there. And you do see some teams, especially receivers, shut down in that weather and I didn’t see any of that.”

The Razorbacks are playing with huge incentive, needing one more win to gain bowl eligibility after losing consecutive tight games against Liberty and No. 6 LSU.

Ole Miss was eliminated from contention in the SEC West after its loss to Alabama last week, but the Rebels would still like to hold on to their No. 5 position in the SEC bowl pecking order, behind division champs Georgia and LSU, plus Tennessee and Alabama.

“Really challenging opponent coming up on the road at night, and last time we went there we didn’t play very well, so it’s a big challenge for us,” Kiffin said.

Injuries could also play a role.

Arkansas quarterback KJ Jefferson is seemingly on tap for a return after missing last week’s 13-10 loss to LSU with a shoulder injury. His presence could be a boost to an offense that averages 486 yards and 34 points with him in the lineup and 360 yards and 14.5 points without him.

Jefferson, a native of Sardis, Miss., which is about 30 minutes from the Ole Miss campus in Oxford, played like a man possessed last year against the Rebels, accounting for 411 yards and six touchdowns in a 52-51 loss.

“I think it’s a big deal, honestly,” Pittman said of the importance of the Ole Miss game to Jefferson. “You could feel it last year when we went down there.

“Coming from that area, I think there is some motivation. And when he’s motivated, everybody is. I think the other thing about that is his last outing he didn’t play well. And to be honest with you, that was a hard one for him. You get a guy who hasn’t practiced, that’s hurt, it’s a tough combination.

“And then he didn’t play last week, and those two games we’ve lost after winning a couple in a row. And so I think he’ll play well. I think he’ll play very inspired for a lot of reasons, with being the team closest to home being one of them.”

For the Rebels, tailback Zach Evans is questionable after suffering a concussion last week, and so is tight end Michael Trigg, who suffered a broken collarbone on Oct. 9.

Evans and freshman Quinshon Judkins have formed one of the the best tailback tandems in the nation. Judkins leads the SEC and ranks 10th nationally with 1,171 rushing yards, while Evans has added 692 yards for the SEC’s top ground game.

The Razorbacks and Rebels have engaged in a lively series, which includes a dispute over the use of a player in a game in 1914, which Ole Miss won 13-7. Arkansas claims the game as a forfeit win, while the Rebels continue to count it as a victory. Arkansas maintains it owns a 37-28-1 edge in the series.

Seven of the last 11 games have been decided by five or fewer points, with the Razorbacks leading 4-3 in those meetings.

“It’s always exciting to play Ole Miss, especially with Lane being the coach and all that,” Pittman said. “He’s a popular man, great coach, all those type things. And he’s got them going. …The fans are going to be excited about the game because there’s going to be a lot of offense.”

Based on last year’s outcome, defensive stops will be at a premium.

The Rebels racked up 611 total yards and 324 rushing yards in its one-point win.

Arkansas had a better statistical game with 676 total yards, the fourth-highest total in school history, and 350 rushing yards. The Hogs also had a school-record 39 first downs.

The difference came on the final snap, after Jefferson hit Warren Thompson with a 9-yard touchdown pass with no time left on the clock to pull the Hogs within 52-51. Jefferson’s two-point pass under pressure sailed high for Treylon Burks in the end zone to seal the Ole Miss win.

Pittman said he told offensive coordinator Kendal Briles that the Rebels did them a favor by scoring on a 68-yard pass with 1:07 remaining, after Arkansas tied it on Jefferson’s 10-yard touchdown 15 seconds earlier.

Pittman had another message after that.

Kiffin was asked if that 52-51 shootout was his kind of game.

Kiffin said narratives get created after those kind of games that he doesn’t buy into.

“Everybody’s like, ‘Oh, you guys finished, you know how to finish. ’ ” he said. “… No, they just didn’t make the two-point play. Had they, then everybody would be saying, ‘Oh, they know how to finish and we don’t.’

“So, much like some of these games as you’ve seen lately around the country, where they go down to the last play. Then everybody all of a sudden [thinks] one program’s got it all figured out and the other one doesn’t. That game was very competitive and obviously could have went either way.”

Of course the standard for “could have gone either way” in this series was the 2015 game, known as the “Henry Heave” game in Arkansas.

Arkansas trailed 52-45 in overtime, facing a fourth and 25 from the Ole Miss 40. Brandon Allen passed short to the tight end Henry, who, as he was falling, launched an underhand lateral toward the Razorback backfield.

Alex Collins scooped a perfect bounce after a tip from 6-10 Dan Skipper and followed an escort around left end for a 31-yard pickup to the Ole Miss 11. Allen threw a 9-yard touchdown pass to Drew Morgan — Allen’s sixth and Morgan’s third of the day — two plays later.

Ole Miss defensive end Marquis Haynes had Allen dead to right on the two-point conversion pass, but he grabbed Allen’s face-mask on the would-be sack. Allen broke through the goal plane for the winning conversion on the next snap.

Pittman, the Hogs’ offensive line coach at the time, called that perhaps the most exciting win in his coaching career.

“Yeah, if we’d have made our two-point conversion last year against them, for me that would’ve topped it. But we didn’t.”