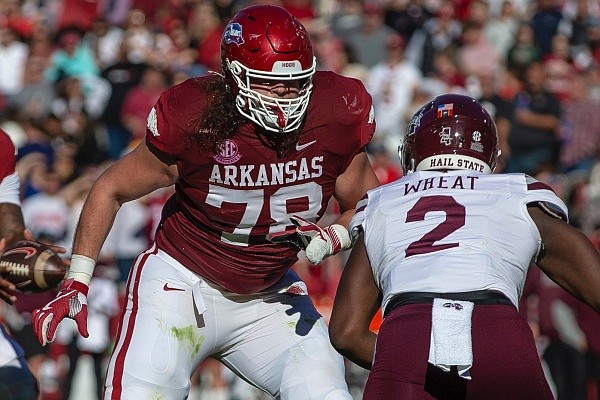 FAYETTEVILLE — One University of Arkansas senior being honored before tonight’s game against No. 14 Ole Miss has been a Razorback for six seasons.

Several seniors are transfers who have been at Arkansas for six months. Another is in his seventh college season.

Some who will be honored could stay and play next season.

The transfer portal and extra eligibility granted by the NCAA because of how the coronavirus pandemic impacted the 2020 season have transformed the traditional last home game ceremony for seniors.

“I’m not going to lie, I didn’t see my career going out like this,” said Dalton Wagner, a sixth-year offensive tackle who has played in 48 games with 37 starts. “But it’s been a lot of fun regardless.”

“There’s one thing I want to get, and that’s one more win in Razorback Stadium.”

Defensive lineman Dorian Gerald, plagued by injuries, got a seventh season of eligibility and has played as a reserve in his fifth year at Arkansas.

Linebacker Bumper Pool, the Razorbacks’ career leader with 439 tackles in 54 games, came back for a fifth season.

“It says something about how they just love to play football,” Pittman said of players utilizing the additional eligibility. “I think a bunch of it was they were having fun. They were enjoying it.

“They were doing some things that they hadn’t been able to do since they got here.

“College football’s hard. I mean, it’s hard. And they elected to come back and I’ll always be grateful to them for that.”

Wagner and Pool are among the players who endured back-to-back 2-10 seasons in 2018-19 under Morris that included a combined 0-16 SEC record.

Last season the Razorbacks finished 9-4 and beat Penn State in the Outback Bowl. This season they’re 5-5 and can become bowl eligible with a victory over Ole Miss or next Friday at Missouri.

“We’ve changed a lot since I got here, and I think we’ve changed for the better,” Pool said. “It’s been an up-and-down roller coaster, but the one goal that I had coming back was to continue to [grow] that culture that we set the past couple seasons.”

Fourth-year junior receiver Jadon Haselwood, also is in his first season with the Razorbacks and eligible for the NFL Draft, has accepted an invitation to play in the East-West Shrine Bowl.

“They came in and it’s like going into a new house or a new family,” Pittman said. “It took some adjustment for some of them, and some of them came right in and it went easy and well for them.

“I can tell you there’s not a guy we got out of the portal that we’re not happy that we have. They’ve done a nice job for us.”

Redshirt junior tight end Hudson Henry is among the players who will be honored tonight, an indication he is playing in his last home game.

“When I first came in here under Chad Morris, we didn’t have the best season. That’s not even a good word for it.

“Having Pitt coming in here and helping change this program, it’s really meant a lot, because I love the Razorbacks.

“Just seeing the way we’ve been able to drive ourselves out of the mud and to where we are now … having pride in that, it’s going to mean a lot walking on senior day, knowing I was able to help do that.”

Offensive tackle Luke Jones became a starter this season after transferring to Arkansas from Notre Dame in 2019.

“My decision to come to Arkansas, transferring back home, was the best decision I’ve ever made,” said Jones, who is from Little Rock. “My heart belongs in Arkansas. I’m so happy that I did it.

“It feels like forever ago whenever I transferred here from Notre Dame to be honest, but my time here has been nothing short of amazing.”

Defensive end Zach Williams, who had to play as a true freshman in 2019 due to depth issues, has steadily improved throughout his career.

“We’ve got to send these seniors out with a win,” Williams said. “It would be a blast.”

“There are several of them that I’m going to talk to and see if we can get them to [go through senior day] twice,” Pittman said. “It’s not the time to talk to them now, not until the season is over.