Trustees get this one right 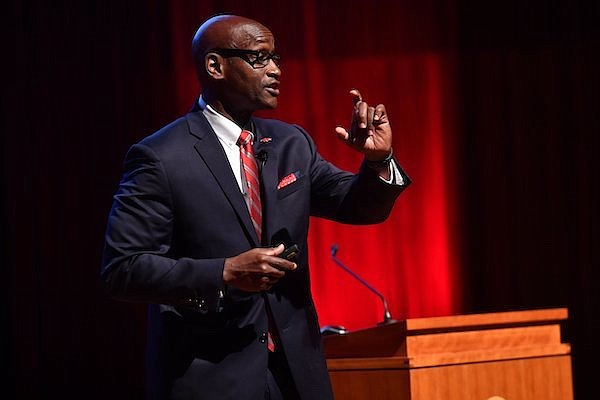 Charles Robinson, interim chancellor of the University of Arkansas, speaks Monday, Sept. 12, 2022, during the first in a series of forums for candidates for the job of chancellor at the Faulkner Performing Arts Center on the university campus in Fayetteville.

FAYETTEVILLE — Regardless the outcome of tonight’s game at Reynolds Razorback Stadium, the University of Arkansas can celebrate this weekend in Fayetteville.

Finally the UA Board of Trustees broke its 5-5 deadlock and Wednesday unanimously named interim Chancellor Dr. Charles Robinson the permanent chancellor of the UA’s flagship in Fayetteville.

Dr. Robinson has been interim chancellor since August 2021 following the abruptly forced June departure of Joe Steinmetz, Board hired via Ohio State.

Dr. Robinson’s bachelor and doctorate degrees stem from the University of Houston and his masters from Rice University. He became a rising UA star since his 1999 arrival in Fayetteville as assistant professor of history. He was provost when asked to become interim chancellor.

Obviously he affected many as a teacher, administrator, speaker and just plain human being. His overwhelming support generated among students, faculty and alums proved impressively too vast for the Board to ignore during its nationwide search.

That Dr. Robinson happens to be Black provides more than a bonus for a state whose university was founded in segregation.

Arkansas Democrat-Gazette columnist/historian Rex Nelson spoke optimistically Tuesday to the Fayetteville Chamber of Commerce about Arkansas’ statewide economic and cultural potential if — as he said citing Arkansas’ too often blundered past — “we don’t blow it.”

It appears the UA and Arkansas got this one right.

“I’m not going to lie,” Wagner said of his Fayetteville farewell preceding the Nov. 25 SEC season closer at Missouri. “I didn’t see my career going out like this.”

Wagner endured seasons Arkansas dreamed to be 5-5. The Spring Grove, Ill., native redshirted as a 2017 freshman when the Bret Bielema Arkansas era ended 4-8 overall, 1-7 in the SEC.

A giddy campaign compared to ill-prepared successor Chad Morris going 2-10 and 0-8 in the SEC two years in a row.

Pittman was heralded debuting 3-7 for the 2020 schedule, entirely SEC, revamped by covid.

“I’d rather have the expectations be high and take the criticism,” Pittman said. “Than they go, ‘Oh well, you played LSU to 13-10 and they’re West Division champs.’ We don’t want any of that. We want to win.”

So do Wagner and Jefferson pronouncing themselves healed to play tonight.

“I wouldn’t trade it in for the world,” Wagner said of his Arkansas experience. “There’s one thing I want to get Saturday and that’s one more win in Razorback Stadium.”