5 things to watch from Arkansas at Maui Invitational 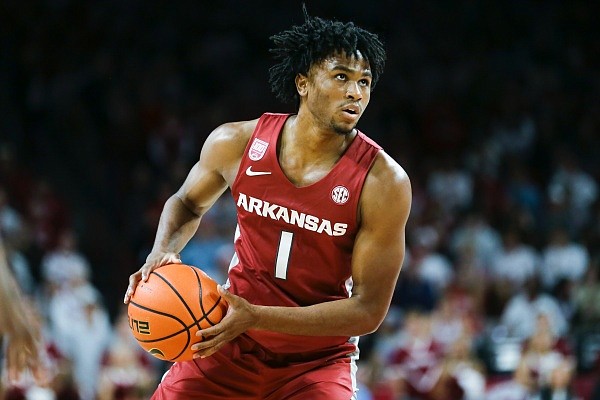 Arkansas guard Ricky Council IV (1) looks to shoot, Friday, November 11, 2022 during the first half of a basketball game at Bud Walton Arena in Fayetteville. Visit nwaonline.com/221112Daily/ for the photo gallery.

FAYETTEVILLE — Ninth-ranked Arkansas is part of the field at the Maui Invitational for the first time since the 2013-14 season.

The Razorbacks are off to a 3-0 start, and they play their first game in the event against Louisville on Monday at 4 p.m. Central on ESPN2.

Here are five things to watch during Arkansas' time in Hawaii:

In the early stages of the previous two seasons, it has taken Arkansas coach Eric Musselman’s teams nearly a dozen games — and an embarrassing loss or two — to fully buy in to what the Razorbacks’ staff wants on a nightly basis on the defensive end.

Perhaps to the surprise of some, Musselman included, Arkansas has largely been locked in defensively from the get-go. The Razorbacks will enter their three-game stretch at the Maui Invitational having allowed 54 points per game.

Their opponents thus far have made 34.4% of their field goal attempts and 22.2% from three-point range. To put Arkansas’ three-point defense into perspective, the Razorbacks have made only 13 threes themselves.

They have given up 12, and have the nation’s No. 15 three-point defense.

Opponents have made 40.8% of two-point looks. Combine those things with a defensive turnover rate of 28.4%, Arkansas is entering Monday’s game against Louisville (0-3) as the top defense in the event from an efficiency standpoint, allowing 85.9 points per 100 possessions, according to KenPom.

“This group's done a really good job of understanding scouting reports, which is a surprise,” Musselman said. “Really happy with how we defended. I think when we do drills in practice, they do a really good job, surprisingly, because I thought maybe this would really have to evolve.

“Their body language is buying in where maybe in the past, we've had some guys who got bored doing our station work.”

According to CBB Analytics, the Razorbacks’ defensive rating sits at 73.3, which places them in the 99th percentile nationally. The site also has a metric called “Hakeem Percentage,” a figure that is the sum of a team’s steal percentage and block percentage.

The Razorbacks have been impressive on the defensive end in a variety of ways, from diving on the floor for loose balls and tipping the 50-50 balls in the direction of teammates to covering for one another in rotations to off-ball defenders digging for steals on opponents’ dribble-drives. Arkansas’ connectivity is ahead of where many thought it would be in late November.

And it is what makes the Razorbacks, according to some oddsmakers, the favorite to win the Maui Invitational.

The Wichita State transfer is off to a beyond-expectations kind of start on the offensive end.

Through three games, Council is averaging 18.7 points on 57.9% shooting. The 56 points scored are his most over a three-game stretch in the same season in his college career.

Council’s second-best run came last season when he added 54 points against Tulane, Cincinnati and Central Florida. He scored a career-high 31 points against the Knights behind a 16-of-20 night at the free-throw line.

The 6-6 guard has flashed a three-level game that has led to an offensive rating, per KenPom, of 120.4.

Council is second on the team with 3 three-pointers, he has knocked down 3 two-point jumpers outside the lane, and he has a team-high 12 scores at the rim on 14 attempts. His 13 free-throw attempts lead Arkansas and are another measure of his aggressiveness.

Council’s confidence appears sky high. The key question heading into the Razorbacks’ series of games: Can he sustain his current level of play against better competition?

If I had to guess, I would say his effort and energy will not wane during the trip, and that in itself will lead to productive games.

As of Saturday, Council was No. 3 in the SEC in scoring behind Florida’s Colin Castleton and Alabama’s Brandon Miller. But he’s done far more on that end than just score.

According to KenPom data, Council has assisted on 21.2% of Arkansas’ scores when on the floor. In the SEC, that figure ranks 23rd — not bad for a player who has not been counted on for a great deal of ball handling in his college career.

Given their various basketball experiences and backgrounds, many of the players who make up the Razorbacks’ roster are not unfamiliar with the national scene or playing in unique venues.

That could be an advantage of sorts, I suppose.

But the Maui Invitational is a different deal. It is the showcase event during the week of Thanksgiving, and the kind of spectacle that draws both the die-hard college basketball fan and the casual one just hoping to catch a glimpse of the best pro prospects in the field.

The atmosphere inside the Lahaina Civic Center, which seats up to 2,400 people, is something I anticipate the Razorbacks will embrace. It is an intimate crowd, and I imagine Arkansas will have a healthy number of supporters in attendance.

“I think we’ll be good to play in that environment,” freshman guard Anthony Black said. “We’ve got a lot of gamers, and a lot of people rise up to the challenge. I think playing in an environment like that will probably elevate us, to be honest.”

Musselman said following the Razorbacks’ 71-56 win over South Dakota State on Wednesday that he knows for a fact Arkansas will be ready for its games. Similar to their run in the NCAA Tournament last season and trip to Europe, the Razorbacks are mixing fun and basketball.

Surfing lessons were on deck Saturday, and walkthroughs on the beach are likely throughout the week.

“I can promise you there is one team that’s going to be focused to play, and that’s us,” Musselman said. “We’re never going to do something at all that hurts our preparation.

“It’s my belief on a Saturday and you don’t play until Monday, if you go hang out and do something you’ve never done, hopefully it helps your mental state as well as your emotional state.”

Given the upcoming uptick in competition, there is a strong chance the Razorbacks come face-to-face with adversity during their stay in Hawaii. How will Arkansas respond?

“I think if we all stay connected, stay together, I don’t think it’ll be any different than playing at Bud (Walton Arena),” junior guard Davonte Davis said. “In practice, we’re preparing for what’s upcoming for us.

“Us being ready as a team and as a collective group, we’ll all come together and be prepared.”

It is clear that Trevon Brazile and Makhi Mitchell are the Razorbacks’ top front-court players. Mitchell, the Rhode Island transfer, is the top dog in terms of a traditional big.

Mitchell, to this point, is averaging 20.3 minutes per game. The other forwards: Jalen Graham 9.5, Kamani Johnson 7.3 and Makhel Mitchell 5.0.

Arkansas will likely need stretches of quality play from that group of three on multiple occasions in this tournament format.

Graham has been up and down in his two appearances this season. Arkansas would certainly take a repeat of his Fordham performance in at least one game, and less of his high-usage outing against South Dakota State in which he had 2 points on 1-of-4 shooting, 6 rebounds and 2 turnovers in 8 minutes.

Makhel Mitchell has yet to receive his first extended run with the Razorbacks. He played four minutes aghast Fordham and six vs. South Dakota State.

In those limited minutes, he is 0 of 2 from the floor with 3 rebounds, 1 assist, 2 turnovers and 2 steals. Being able to sub in a body like him to replace Makhi Mitchell can be a real luxury in a three-games-in-three-days scenario.

Johnson has been so-so to this point in the season. He had 4 rebounds — 3 offensive — in the win over South Dakota State, but with that came 3 turnovers and 3 fouls in just 9 minutes.

Arkansas would benefit greatly from Makhel Mitchell, Graham and Johnson doing the little things well and impacting the game with their energy and effort when called upon. Graham has the ability to score in bunches, obviously.

The quick turnarounds may offer Johnson and his rebounding motor a great chance to steal possessions and buckets from potentially tired legs on the other side.

But above all else, each player just needs to star in his role.

Get to know Louisville

The Cardinals have battled severe growing pains early in Kenny Payne’s tenure. They have 3 one-point losses to Bellarmine, Wright State and Appalachian State, who have an average KenPom rating, as of Saturday night, of 208.

One of Louisville’s chief concerns is turnovers on both ends.

For one, it has committed a turnover on 24.5% of its possessions, according to KenPom data. And defensively, the Cardinals have forced a miscue on only 15.2% of possessions.

The site also shows Louisville, which has lost 18 of its last 21 games dating to Jan. 8, has a non-steal turnover rate of 15.7%. That is troublesome. Only six teams have a worse mark nationally, per KenPom.

Ellis, who has taken 31 more shots than any other Cardinals player, also leads the team with 10 assists and 16 turnovers. He totaled eight turnovers in the loss to Wright State and five more against Appalachian State.

Former Tennessee forward Brandon Huntley-Hatfield is playing well for the Cardinals, averaging 10.3 points and a team-high 8.7 rebounds in 30.7 minutes per game. He turned in a 12-point, 10-rebound double-double in Louisville’s last game.

Huntley-Hatfield in March had 7 points on 2 of 6 from the floor, and 4 rebounds in Tennessee’s home win over the Razorbacks. He scored one point and grabbed two rebounds in the Vols’ road loss to Arkansas.

Mike James (11.0) and Jae’Lyn Withers (10.7) round out the Cardinals’ double-figure scorers. James, a 6-5 redshirt freshman, scored 16 points in the season-opening loss to Bellarmine. He had 17 total points in the team’s next two games.

James has made 5 of 10 three-point attempts, good for second on the team.

Withers, a 6-9 redshirt junior, had 15 points and 11 rebounds against Wright State. In Louisville’s last outing, though, he had 3 turnovers and 5 fouls in 10 minutes and did not score or grab a rebound.

“We have to try and go focus and win our first game and see what happens from there,” Musselman said. “I told the team, Louisville is going to put a streak together, and they’re going to play an A-plus game sometime here in the near future.

“I can guarantee that.”