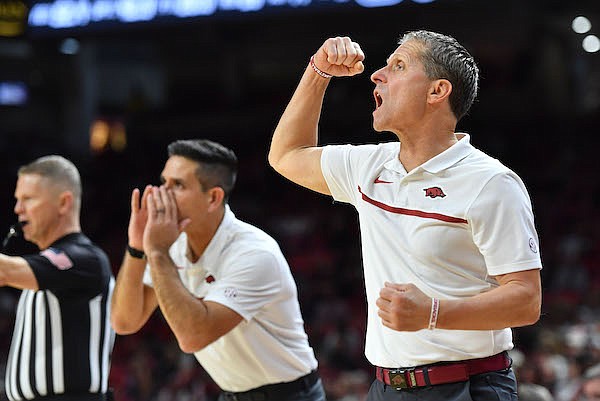 Arkansas coach Eric Musselman is shown during a game against South Dakota State on Wednesday, Nov. 16, 2022, in Fayetteville.

FAYETTEVILLE — Trevon Brazile had only been on the University of Arkansas campus for a few weeks last summer after transferring from Missouri, but already he had a good sense of the Razorbacks’ ability to play defense.

“One thing I’m looking forward to is being able to see what this team can bring outside of practice,” Brazile, a 6-10 sophomore forward, said in late July before the team embarked on a four-game exhibition tour in Europe. “Sometimes I think our defense is so good that we make the offense look sloppy.”

The No. 9 Razorbacks, who play man-to-man defense, certainly have made their opponents look sloppy on offense in starting 3-0 going into Monday’s game against Louisville at the Maui Invitational.

Arkansas’ latest defensive lockdown game was a 71-56 victory over South Dakota State on Wednesday night in which the Razorbacks led by 27 points, 64-37, with less than six minutes left before the Jackrabbits rallied late.

“Really happy with how we defended,” Arkansas Coach Eric Musselman said. “I think when we do drills in practice, they do a really good job, surprisingly, because I thought maybe this would really have to evolve.”

None of Arkansas’ first three opponents have managed to score 60 points. The Razorbacks opened with a 76-58 victory over North Dakota State and beat Fordham 74-48.

Fordham’s 30 turnovers were the most by an Arkansas opponent since Dec. 31, 2004, when Louisiana-Monroe had 30 in an 85-43 victory for the Razorbacks.

Arkansas has been elite defensively despite having 11 newcomers with six freshmen and five transfers.

“But the buy-in and paying attention in drills, really high level,” Musselman said. “Maybe as much as any team that we’ve had from a defensive standpoint.”

The Razorbacks certainly bought in when Musselman called a timeout in the first half after South Dakota State had pulled within 31-27 on consecutive dunks by freshman Kyle Williams.

“I thought we had to play with much more defensive tenaciousness,” Musselman said. “Be more disruptive.”

Arkansas responded with a 10-2 run to close the first half, sparked by two steals and a blocked shot by freshman forward Jordan Walsh.

“His defense was crazy,” Black said. “He was getting the ball, and we were getting run-out layups,

“Jordan is 6-7, has a 7-foot plus wingspan and can jump out of the gym. So those three things can cause him to be a good defender.

“He gambles a lot, but once he learns how talented he is defensively, I think he’s going to be a really good defender. He showed that in spurts.”

Arkansas kept the defensive pressure on to open the second half with an 11-2 run that pushed their lead to 52-30.

“South Dakota State’s a really good three-point shooting team,” Musselman said. “You’re going to see this team have a lot of nights where they shoot and make double-digit three-balls during the course of their season.

“So I thought we did a really good job of hugging the three-point line, making their three-point shooters floor it. That was a big part of what we wanted to do.

“They weren’t allowed to get many attempts up because we stayed attached.”

Senior forward Matt Dentlinger, averaging a team-high 16.7 points for the Jackrabbits, was held to 3 points in 22 minutes — all on free throws. He was 0 of 2 from the field.

Both teams had 20 turnovers, but Arkansas had a 23-11 edge in points off of turnovers.

“Part of our game plan was to run,” said Black, who had four steals. “Get stops and run.”

Musselman said the Razorbacks’ stingy defense is a by-product of their work in practice and attention to detail on pregame scouting.

“Them going from basket to basket, I mean, they’re probably bored, but they don’t want to act like they are,” Musselman said of drill work. “Their body language is buying in, where maybe in the past we’ve had some guys who got bored doing our station work.

“This group’s done a really good job of understanding scouting reports, which is a surprise. I thought last year — maybe the year before — it took us right around 10 to 12 games [to decide], ‘Alright, let’s fully buy into what we’re supposed to do.’ ”

Davis said holding opponents to 12 of 54 on three-pointers has been a key for the Razorbacks’ success.

“Three is more than two, and so we take away the three, we win by a pretty good margin,” Davis said. “We’ve got to protect the three-point line, but also help the bigs. I think we’re doing a pretty good job at doing what we were taught at practice.”

Arkansas has outscored opponents 130-74 on points in the paint.

“There’s not going to be a lot of teams better inside than us,” Black said. “As long as we can defend the three, we’re pretty confident that we’re going to win the battle inside the three-point line.”