Kiffin preaches value of turnovers after loss at Arkansas 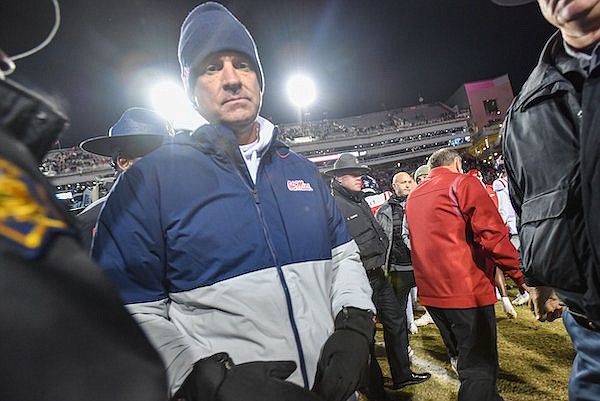 Ole Miss coach Lane Kiffin walks off the field following a 42-27 loss to Arkansas on Saturday, Nov. 19, 2022, in Fayetteville.

FAYETTEVILLE — On a night when Ole Miss manufactured 703 yards of offense, the Rebels only had 27 points to show for it.

Three turnovers, two score-erasing penalties and a badly missed 39-yard field goal proved too much to overcome for the Rebels. Ole Miss couldn’t keep pace on the scoreboard with Arkansas, falling 42-27 at Reynolds Razorback Stadium.

Both of the Rebels’ touchdowns called back were due to holding penalties in the first half. The mistakes quickly changed the momentum of the game, as Arkansas scored on three consecutive possessions in the first quarter.

“Penalties are going to happen, where you make bad decisions and it doesn't matter because the ball is incomplete or whatever,” Kiffin said. “It's really crushing when we get what they called holding on the first touchdown pass. I don’t understand it being holding because they said it was after the play that he finished the guy, so not really holding. Then we get another holding on another touchdown pass. Obviously critical penalties that take 14 points off the board.”

While Kiffin didn’t agree with all the calls, he noted his team’s miscues didn’t help with its odds of winning.

“There’s a recipe to not win, and that's minus-three in the turnover margin, you're not going to win most of the time," Kiffin said. "It just shows you can have all these yards and stuff and still lose because you’re minus-three.”

Ole Miss was left trying to keep up as Arkansas was clicking on offense in the return of quarterback KJ Jefferson. The Razorbacks scored touchdowns on 5 of 7 first-half possessions and led 35-6 at halftime.

“I just know they were running the ball at will, and I just need to go back and see what they did and correct it for next week,” Ole Miss safety AJ Finley said. “I just feel like the energy at the start of the game wasn’t where it needed to be. I feel like that is the biggest thing in how we played the first half.”

Arkansas played much better offensively with a healthy Jefferson.

“It was certainly good for him to take a week off, because it sounds like he’d been banged up and not practicing much,” Kiffin said of Jefferson. “And he didn’t look pretty healthy in that (Liberty) game. So, they’ve got him back healthy and he's a load. He did a good job of giving his receivers chances in the red zone, and three different times the ball’s up there and we don't want to make plays and they do. They’ve got tall, long receivers.”

The Rebels had two running backs rush for over 200 yards in Quinshon Judkins (214) and Zach Evans (207), but came up empty on two possessions in the red zone.

Arkansas' Raheim Sanders went over 200 yards rushing early in the third quarter when he exploded for a 68-yard score. The Razorbacks’ sophomore bruised the Rebels on the ground to the tune of 232 yards and three touchdowns.

“I was worried because these guys are a top-10 rushing team in the country,” Kiffin said. "They do a great job. With the quarterback back, they’re even more difficult because he's hard to bring down. Sanders had a great game.

"How many SEC games have you covered with three running backs over 200 yards in a game? In analytics, I bet that isn’t very high, maybe never. It’s very unusual.”