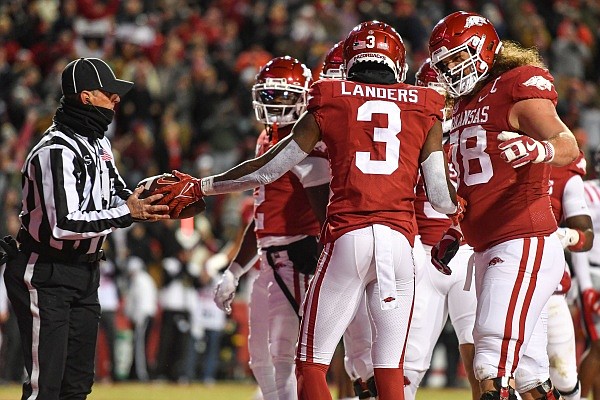 Arkansas wide receiver Matt Landers (3) celebrates his first of two touchdown receptions with offensive lineman Dalton Wagner (78) and other teammates, Saturday, Nov. 19, 2022, during the first quarter of the Razorbacks’ 42-27 win over Ole Miss at Reynolds Razorback Stadium in Fayetteville. Visit nwaonline.com/221120Daily/ for the photo gallery.

FAYETTEVILLE — Arkansas running back Raheim Sanders stole the show Saturday night during the Razorbacks’ 42-27 victory over No. 14 Ole Miss.

But Arkansas set the tone early against the Rebels with the passing game. After missing last week, quarterback KJ Jefferson threw for 168 yards and 3 touchdowns in his return to the lineup.

Matt Landers, the transfer from Toledo, ensured the Razorbacks’ quick start by hauling in a pair of impressive touchdowns.

“Big night. He’s had a great week of practice,” Jefferson said of Landers. “Just working on coming off the ball full speed and just being able to get the timing down pat with Matt (is important).

“And then just also knowing that he’s a bigger target and he has great hands, being able to put the ball around him and just let him make a play and just let him be natural, his natural self. I’m extremely proud of Matt.”

Landers finished with 3 catches on 4 targets for 38 yards and 2 touchdowns. His first reception, made in traffic after a slant route, put the Razorbacks ahead 7-0 with 8:28 left in the first quarter.

The 6-5 receiver took a shot from Ole Miss defensive back Tysheem Johnson shortly after making the grab.

"He got rocked on that first one,” Arkansas coach Sam Pittman said. “He got hit.”

Less than five minutes later, Landers put the Razorbacks ahead 14-0 with perhaps his most impressive catch this season. On first-and-10 from the Rebels’ 23, Landers came up with a score on a perfectly placed ball from Jefferson.

The over-the-shoulder grab after beating man coverage gave Landers sole possession of the team’s touchdown catches lead with six. It also wrapped up the third multi-score game of his career.

Pittman was not at all surprised by Landers' second catch, or the first for that matter.

“Do we see him catch those kind of balls? Yeah, quite a bit,” he said. “I’ll tell you, Landers has just gotten better over the second half of the season.

“He’s got a lot more confidence and got a lot better.”

Landers has 701 receiving yards this season — the most yards by an Arkansas receiver not named Treylon Burks since Drew Morgan (739) in 2016.

Sanders added that he sensed Landers entered the game with great confidence. And Jefferson said the receiver’s two-score game is a byproduct of his work throughout the year.

“He’s extremely hard on himself, and now all his hard work is finally paying off,” Jefferson added.