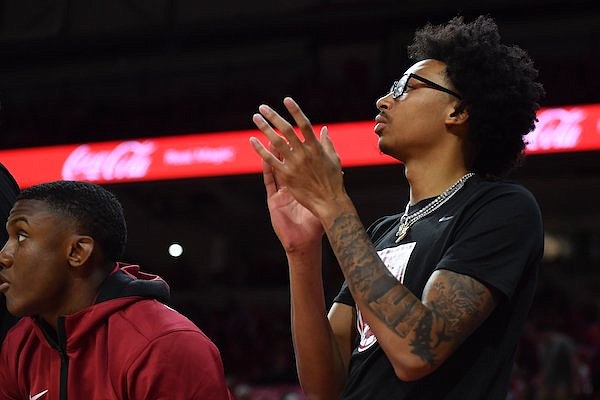 Arkansas guard Nick Smith cheers Monday, Nov. 7, 2022, from the bench during the first half of play against North Dakota State in Bud Walton Arena in Fayetteville.

FAYETTEVILLE — University of Arkansas Coach Eric Musselman isn’t tipping his hand about whether he expects Nick Smith — the Razorbacks’ heralded freshman guard — to make his college debut at the Maui Invitational.

The No. 9 Razorbacks (3-0) play the first of three games in Maui when they open against Louisville (0-3) on Monday.

Smith, a preseason All-SEC first team pick by the coaches and media and projected high first-round pick in the NBA Draft, didn’t play in No. 9 Arkansas’ first three games because of a right knee injury.

Smith got up some shots at Walton Arena on Wednesday night after the Razorbacks beat South Dakota State 71-46.

“I think Nick continues to improve,” Musselman said. “But he’s still [limited] … We want to make sure he’s in a good spot [before playing in games].”

Musselman said Smith has not practiced.

“So it continues to be a process that we just have to evaluate,” Musselman said. “And when I say [Smith is] day by day, he’s not going to wake up [Thursday] and practice.

“But I’m not going to do an injury report and tell the whole world where we are day by day either.

Smith did travel with the team to Maui, Musselman confirmed.

Additional newcomers for next season, Razorbacks Coach Eric Musselman indicated, will come from the transfer portal.

“We’re done in the high school ranks,” Musselman said. “We’re going to try to have a philosophy to go after high, high level high school players, like the two guys we just got, and then see how the roster is and then go from there.

“We’re not recruiting anybody else in that class for sure.”

Bellarmine, a private college in Louisville that plays in the ASUN Conference along with the University of Central Arkansas, beat the Louisville Cardinals 67-66 to open the season.

When Eric Musselman was asked about the game, he chose to praise Bellarmine rather than focus on how Louisville played.

“We’re not playing that team, I can tell you that. We will not be scheduling them as long as I’m living, I can promise that.”

After video of Musselman’s comments were posted on social media, Bellarmine assistant coach Beau Braden tweeted a reply and said he’d love for the Knights to experience playing Arkansas in Walton Arena.

Musselman replied, “Coach, we will play you guys in Bud Walton if we can put a limit on the amount of passes you can have during the game” with a laughing emoji.

“Let’s make it happen,” Braden replied. “Pick a date. But we’ll probably have to limit the number of TOs you’re allowed too.”

Braden then wished Musselman and the Razorbacks a safe trip to Maui.

“I get to see some white sand, the blue ocean,” Davis said. “I’ve never seen anything like that. I’m ready to go.”

On Saturday, Davis tweeted a photo of the team on the beach.

Arkansas Coach Eric Musselman got to celebrate his birthday at the beach in Maui on Saturday when he turned 58.

Musselman was born on Nov. 19, 1964, in Ashland, Ohio, when his father Bill was an assistant coach for the Ashland University basketball and football teams.

The Razorbacks didn’t practice at home on Friday and instead left early for Maui so the players would have time to relax after arriving and be ready for some fun activities on Saturday, which Musselman said would include surfing lessons.

When Musselman coached at Nevada, he said all of the players were able to do some surfing when the team played exhibition games in Costa Rica in August of 2017.

“My hope and goal is to get everybody up on the board,” said Musselman, who on his radio show earlier this week said he did some surfing when he lived in San Diego. “We did it at Nevada, had all 13 players be able to stand on a surfboard in the water and try to ride the wave.

“The longer the board, the easier it is to get up on to for those of you who have not surfed before. So if you get a really long board, you’ve got a pretty good chance of staying up if you have some balance.”

Musselman said he also planned to have some walk-through practices on the beach, as the Razorbacks did in August when they played a four-game exhibition tour in Spain and Italy.

Arkansas is 3-4 against Louisville, a program the Razorbacks haven’t played since the 2008-09 season when the Cardinals won 99-66 in St. Louis. That was in John Pelphrey’s second season as Arkansas’ coach when he faced Rick Pitino, who had been his coach at Kentucky.

Louisville has a new coach this season in Kenny Payne, who as a Kentucky assistant coached the Wildcats to a 73-66 victory at Arkansas in 2020 after Coach John Calipari was ejected.

Payne, a player on Louisville’s 1986 national championship team, was an NBA assistant with the New York Knicks the previous two seasons.