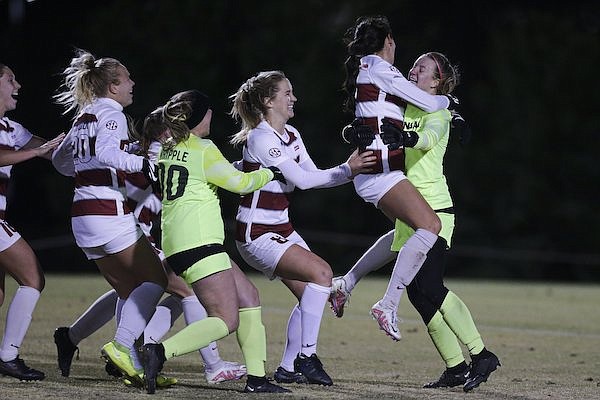 Arkansas goalkeeper Grace Barbara (right) is swarmed by teammates after she recorded the last of her three saves during a penalty shootout Sunday, Nov. 20, 2022, in Fayetteville. The Razorbacks defeated Memphis 3-2 in the shootout to advance to the quarterfinals of the NCAA Tournament.

FAYETTEVILLE — The Arkansas soccer team is returning to the Elite Eight for the second consecutive season after a thrilling victory over Memphis on Sunday in a penalty shootout at Razorback Field.

Arkansas goalkeeper Grace Barbara saved 3 of 5 penalties and led the team to its first-ever win in an NCAA Tournament shootout. The Razorbacks were eliminated by penalty kicks in 2013, 2016 and last year in the Elite Eight at Rutgers.

Emilee Hauser, Taylor Berman and back-up goalkeeper Sierra Cota-Yarde each scored from the spot as the Razorbacks won 3-2 in PKs. The score was tied 3-3 at the end of regulation and two 10-minute overtime periods.

Arkansas (13-3-5) advanced to play top-seeded Florida State in the national quarterfinals on Saturday in Tallahassee, Fla. The Seminoles (16-2-3) advanced with a 3-0 victory over Pittsburgh on their home field Sunday.

The Razorbacks seemed to secure control of its game against Memphis twice in regulation, but the Tigers’ offense responded each time. Despite conceding multiple leads, Arkansas coach Colby Hale was pleased that his team was able to keep its composure.

“We talked about this game being a microcosm of this team,” Hale said. “It’s been a little bit up and down, but at the end of the day they found a way to win. I couldn’t be more proud of them.”

The Razorbacks took a 2-0 lead in the first half with two headers off free kicks from Jessica De Filippo in the 11th and 37th minutes.

Both times, the kicks were lofted into the box by Hauser after forward Anna Podojil was fouled. Both headers from De Filippo looped over the Memphis goalkeeper and into the top corner inside the far post.

“She is fearless in there,” Barbara said of De Filippo. “We know when that ball is lofted in and (De Filippo) is at the back post, she’s going to fight to get there.”

De Filippo has scored six goals through three tournament rounds. Set-piece goals have become a specialty of the Razorbacks who have converted six goals from dead balls during the NCAA Tournament.

The Tigers (11-5-6) struggled to create offense for the majority of the first half. Arkansas out-shot Memphis 8-2 through 45 minutes, but the visitors made the most of their limited opportunities.

In the 41st minute, Arkansas failed to clear a corner kick and Lily Huber flicked the ball into the net from point-blank range during the ensuing scramble.

Three minutes later, junior midfielder Grace Stordy dribbled down the right flank and unleashed a low drive toward the goal. Her shot deflected off a teammate, Mya Jones, and caught Barbara flat-footed to tie the game 2-2.

The offensive spurt carried over out of the intermission. The Tigers threatened to take the lead as they registered the first five shots of the second half.

As the game progressed, Arkansas’ offense looked out of sync in the run of play and struggled to string passes together against a physical defense. The heightened aggression led to the Tigers accruing 11 fouls and 3 yellow cards, compared to 11 and 1 from the Razorbacks

Arkansas did not get a shot off in the second half until freshman forward Zoe Susi gave the Razorbacks the lead in the 81st minute. It did not last long as Memphis threw numbers forward on offense with their season on the line.

The overloading attack resulted in a game-tying score from Jones with just over one minute left to play. She tapped a rebound into an open net after her initial attempt sailed over Barbara’s head, struck the post and landed back at her feet.

Neither team conjured a goal-scoring chance in 20 minutes of overtime.

It was the second shootout of the season for Arkansas, which lost to Vanderbilt in PKs at the SEC Tournament on Nov. 1. Barbara did not make a save in the shootout against the Commodores.

“It stuck with me and it stuck with the team,” Barbara said. “I told the team after Vanderbilt, 'This doesn’t matter. If we make it to PKs in the NCAA (Tournament), that is what matters.'"

The Razorbacks extended their home unbeaten streak to 22 games in their final game of the season at Razorback Field. They have never lost at home in nine post-season games.

“The world is saying this is a rebuilding year for us,” Hale said. “We lost a ton of players to graduation and the pros. We had a ton of injuries....This team just doesn’t use those things as excuses.”

With a win at Florida State, Arkansas would advance to the College Cup — soccer's pinnacle four-team event — that will be played Dec. 2-5 in Cary, N.C.