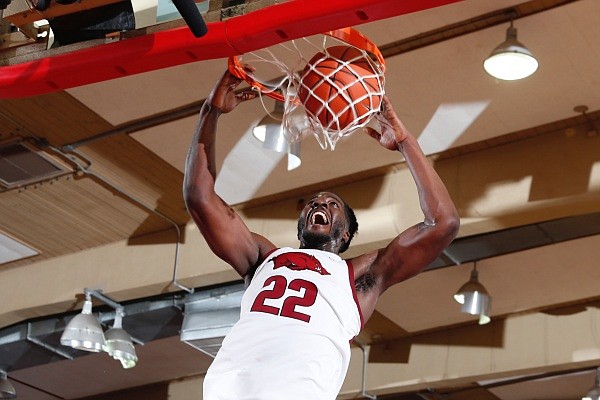 Arkansas forward Makhel Mitchell dunks the ball during the Razorbacks' 80-54 win over Louisville in the Lahaina Civic Center at the Maui Invitational on Nov. 21, 2022. (Brian Spurlock/KemperLesnik)

Arkansas freshman guard Anthony Black said last Wednesday that the No. 9 Razorbacks would be prepared for the Maui Invitational’s grand stage.

He later added that playing in the early-season showcase would likely elevate the team’s play. Black knows what he’s talking about.

The former McDonald’s All-American and starting guard who was playing the fourth game of his college career Monday, Black stole the show during Arkansas’ 80-54 victory over Louisville in its first game at the Lahaina (Hawaii) Civic Center. He finished with a game-high 26 points on 9 of 11 from the floor, 6 assists, 3 rebounds and 2 steals.

Perhaps most impressive about Black’s break-out game was his perimeter jumper. He knocked down 3 of 5 three-point attempts and also hit a long two-point shot.

And once the Cardinals had to respect his jumper, Black either shot faked defenders or caught swing passes from teammates, and got the ball to the middle of the floor or to the rim. Time and time again, he compromised the Louisville defense and made the kinds of plays usually seen from players who are first-round draft picks.

Black’s six assists were a season high. He had eight in the first three games of the season. His assists generated 15 points for the Razorbacks and were spread among five teammates.

Black made or was credited with an assist on 6 of Arkansas’ 8 three-pointers.

He was the best player on the floor by a fairly wide margin. The freshman gave Louisville fits.

The Cardinals found themselves in a great deal of trouble when it became clear that the Razorbacks also had the game’s second- and third-best players in Ricky Council and Makhel Mitchell.

Council, the team’s leading scorer entering the game, finished with 15 points and 4 steals, and Makhel Mitchell, the 6-10 Rhode Island transfer, added 12 points and 6 rebounds. The forward did his damage in just 20 minutes after coming off the bench.

His performance is a noteworthy development and provides the coaching staff with more confidence that he can provide solid minutes, impact winning and stuff the stat sheet when given an opportunity. Makhel Mitchell scored 7 of his 12 points in the second half when Arkansas outscored Louisville by 18 points in his 10 minutes.

His aggressiveness attacking misses off the rim was stellar. And he was handsy on the interior when his matchup put the ball on the floor.

Makhel Mitchell looked like a grown man amongst boys for stretches, grabbing rebounds well above the rim and blocking a pair of shots, too.

Makhi Mitchell, who has earned a starting role early for the Razorbacks, pitched in 5 points and 6 rebounds — 3 offensive — to go with 1 assist and 1 block. The twins combined for 4 assists that led to 10 points, including 2 three-pointers by Black.

If there was another standout in the game, it was junior guard Davonte Davis, the Razorbacks’ veteran who has played and played well on unique stages before. On Monday, he scored just 2 points on 1-of-4 shooting and had 5 assists in 32 minutes.

Aside from the assists figure, his stat line looks, on paper, like a so-so night. It was anything but for Davis, who played a vital role in slowing Cardinals star guard El Ellis, who came into the event averaging 24 points.

Ellis finished with 11 points on 4-of-16 shooting, including 2 of 5 from deep. He committed seven turnovers.

Arkansas coach Eric Musselman gave Davis a shoutout in his brief post-game press conference for his defense. It was a key part of yet another impressive defensive showing from the Razorbacks, who have yet to give up 60 points in a game.

Arkansas, according to KenPom data, owns the nation’s No. 3 defensive efficiency rating at 85.8. The Razorbacks have forced a turnover on 29.1% of their opponents’ possessions.

More from WholeHogSports: How to watch Arkansas' game against Creighton on Tuesday

Musselman’s group held Louisville to 36.4% from the floor and 4 of 12 beyond the arc. The Cardinals committed 22 turnovers.

In the first half, Arkansas forced Louisville into strings of six and seven consecutive missed shots. After halftime, the Razorbacks did not allow a Cardinals field goal attempt for a stretch of 2:23.

Arkansas, at that point, was kicking off its run of 7 consecutive made shots, which included 6 dunks by 4 different players. It led by as many as 27 points following Jalen Graham’s dunk.

The Razorbacks imposed their will on Louisville. They did what many anticipated they would.

But on Tuesday, the level of competition rises in a big way with Creighton, ranked 10th in the latest Associated Press Top 25 poll. The Bluejays defeated No. 21 Texas Tech 76-65 on Monday behind double-figure scoring efforts from each starter.

Arkansas, with flying colors, passed its first test on a big stage. Now, it’s time to see how the Razorbacks fare in primetime.