Arkansas' stars made each other better 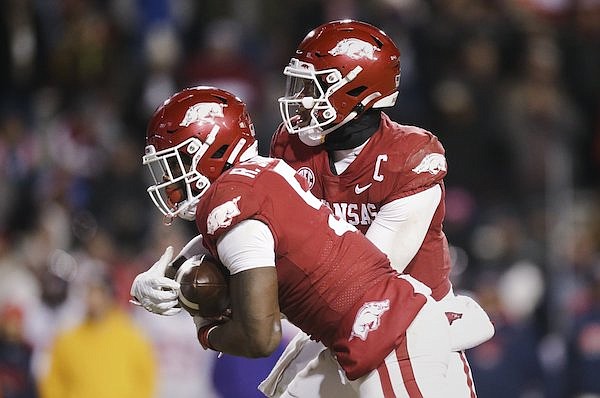 Arkansas quarterback KJ Jefferson (right) hands to running back Raheim Sanders during a game against Ole Miss on Saturday, Nov. 19, 2022, in Fayetteville.

But without Arkansas junior quarterback KJ Jefferson launching ignition, Arkansas sophomore running back Raheim “Rocket” Sanders doesn’t orbit 232 yards and 3 touchdowns on 24 carries, plus 5 catches for 29 yards in a 42-27 victory over the 14th-ranked Rebels.

Jefferson and Sanders complemented like biscuits and gravy in a 35-6 first half. Sanders opened the second half running a 68-yard touchdown.

Finally healthy after playing hurt in the 21-19 loss to Liberty and entirely withheld to heal during the 13-10 loss to LSU, Jefferson got Saturday’s party started, Arkansas Coach Sam Pittman told the Razorback Sports Network radio broadcast.

“You know the first two scores (Jefferson touchdown passes to receiver Matt Landers) we weren’t really playing clean and he (Jefferson) just made things happen,” Pittman said. “He made them happen with his feet. We weren’t playing great up front and KJ was just making plays. And then after that our offensive line took over.”

“I know the first time we went out there (a three-and out when Sanders had one yard) it wasn’t as good as I expected it because I was just rushing it,” Sanders said. “But one thing I’m just learning in the process of life and on the field is just let it come to you. I did that and I feel like that helped with the blocking with the offensive line and receivers, and it helped me accomplish what I wanted to accomplish today.”

“The key decider in it was he trusted us to go get the job done and you could see it in a lot of his cuts.” Wagner said. “He baited, baited, baited, and then cut it at the last second and there would be a hole just as big because he set up the blocks for us. I’m so proud of Rocket....230 net yards — that’s insane.”

It all commenced at quarterback.

With Jefferson playing hurt against Liberty and withheld against LSU, Sanders logged but 60 yards on 17 carries, then 46 yards on 12 carries.

With Jefferson (8 carries for 47 yards rushing and 17 of 22 for 168 yards and 3 touchdowns passing), Sanders was unstoppable until the Hogs started playing the second half clock.

“KJ is the motor to our offense and to our team,” senior linebacker Bumper Pool said.