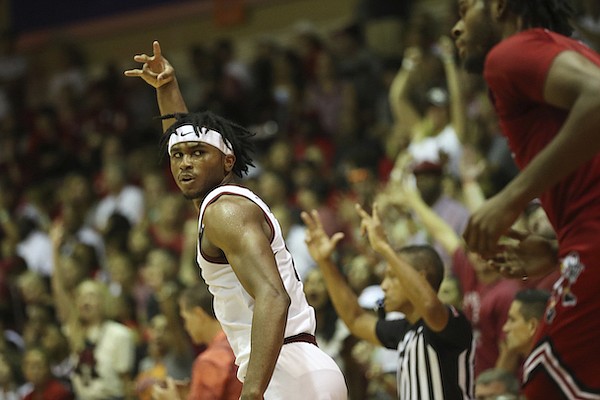 Arkansas guard Ricky Council (1) reacts after making a 3-point basket against Louisville during the second half of an NCAA college basketball game, Monday, Nov. 21, 2022, in Lahaina, Hawaii. (AP Photo/Marco Garcia)

Day 2 of the Maui Invitational will feature one of college basketball’s most anticipated matchups of the early season.

It will be the fourth game this season between teams ranked in the top 10 of the Associated Press Top 25 poll. Gonzaga defeated Kentucky, Baylor defeated UCLA, and Kansas defeated Duke in the other top-10 matchups — all last week.

Texas was ranked 11th when it defeated then-No. 2 Gonzaga last week. The Longhorns have since moved to No. 4 in the AP poll.

More from WholeHogSports: How to watch, listen to Arkansas-Creighton

For Arkansas, Tuesday’s game will be its first top-10 matchup since an 81-72 loss to Baylor in the Elite Eight of the 2021 NCAA Tournament.

It has been nearly 28 years since the Razorbacks have played a top-10 matchup during the regular season — a 94-92 victory over Kentucky on Jan. 29, 1995, at Bud Walton Arena.

Arkansas has played 23 games when both teams were ranked in the top 10 by the AP. The Razorbacks’ record in such games is 9-14.

The Bluejays opened the season ranked ninth in the AP poll, but swapped places last week with the Razorbacks, who were ranked 10th in the preseason.

Prior to the Maui Invitational, Creighton won four home games against St. Thomas, North Dakota, Holy Cross and California-Riverside by an average of 26.3 points.

“They're a great team,” Arkansas coach Eric Musselman said of Creighton. “They're really well coached. They have some older guys. We play a fairly young roster, so it will be a challenge going up against fifth-year seniors.

“But I think that our team has continued to grow and we knew coming into this tournament that we were going to have some really challenging games. That, obviously, is going to be a real challenge to play Creighton.”

The Bluejays, who compete in the Big East Conference, went 23-12 last season and lost 79-72 to eventual national champion Kansas in the second round of the NCAA Tournament. Creighton was outscored 6-0 in the final 55 seconds of that game.

Among the Bluejays’ notable returners are 7-1 junior center Ryan Kalkbrenner and 6-foot sophomore guard Ryan Nembhard. Kalkbrenner was the Big East defensive player of the year last season and Nembhard was the league’s freshman of the year.

“Thank goodness Kalkbrenner was tough enough to play through a pretty good sprained ankle,” McDermott said, “because his presence at the rim and on the glass for us is so important.”

The winner of Tuesday’s game will advance to play in the championship game of the Maui Invitational on Wednesday. Potential opponents from the other side of the bracket are 14th-ranked Arizona and 17th-ranked San Diego State, who opened play in Lahaina with wins over Cincinnati and Ohio State, respectively.

“We’ll go to the hotel and watch film immediately and move on to Creighton,” said Arkansas guard Ricky Council after scoring 15 points during an 80-54 victory over Louisville. “We are going to try to win this tournament.”