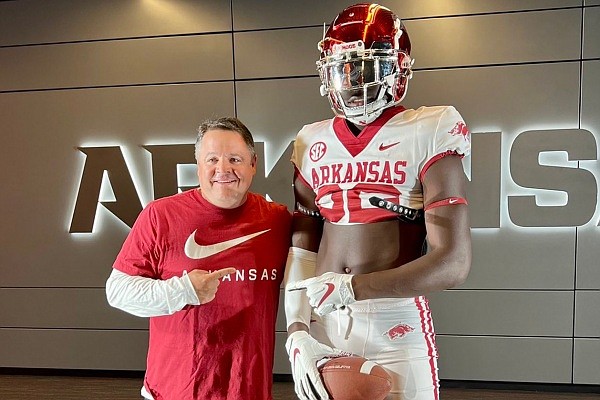 If Arkansas target Davon Mitchell, the nation’s top sophomore tight end, ever decides to become a Razorback, tight ends coach Dowell Loggains’ daughter Aven, 10, could get credited with an assist.

Mitchell, 6-4, 230 pounds, of Allen, Texas, made his fourth trip to Fayetteville on Saturday for the Ole Miss game. He also attended the game against LSU the weekend before.

He visited Arkansas on June 18 and returned for the Tailgate on the Hill on July 30.

Prior to and after the 42-27 victory over Ole Miss, Mitchell spent time with Coach Sam Pittman and Loggains. He also met Loggains’ wife Beth, daughters Reese, Aven and Connor, and son Ryne.

During the conversation with Loggains’ family, Aven made her sales pitch.

“His kids are actually funny.” Mitchell said. “I told [Aven] I wanted one of the Arkansas jackets she had. She said she would give me one, only if I commit.”

“Last week they didn’t win because they were missing a big piece of their team, which is KJ [Jefferson],” Mitchell said. “Once KJ got back, everything looked pretty good. The thing I liked about this week was I got a chance to do a photoshoot and talked to Coach Pittman and Coach Loggains and got a chance to meet Coach Loggains’ family.

“This week, I just loved how Arkansas performed. They got the tight end the ball in the first half. He got the ball a lot.”

He explained why he visited Arkansas two weekends in a row.

“Arkansas is like one of my top schools,” Mitchell said. “I just wanted to come out and see their performance again now that they had KJ back. I wanted to see how everything went.”

His teammate and Razorbacks junior quarterback target Michael Hawkins also made his fourth visit to Arkansas on Saturday. Being one of Arkansas’ most coveted prospects brings attention from the Razorback fans, and Mitchell experienced that on Saturday.

“They were asking me when I was going to commit. I said, ‘I don’t know, time will tell,’” Mitchell said.

Mitchell was humbled by the fans recognizing him.

“Honestly, it’s a great feeling to experience that, to be recognized by people I don’t really know,” he said.

His father, Marko Mitchell, played receiver at Nevada and for the Washington Redskins and Detroit Lions.

“He likes Arkansas,” Mitchell said of his father, who coaches receivers at Allen High School. “He likes how Arkansas uses the tight end. He likes everything about them, the coaching staff, Coach Loggains.”

He appreciates Pittman’s sense of humor and straight-forwardness.

Mitchell’s relationship with Loggains has the Razorbacks in a good position.

“We talk almost every week,” Mitchell said. “He really wants me to come there. He’s not just selling me any kind of dream.”

Mitchell said he is looking at possibly coming back for an Arkansas junior day in January.