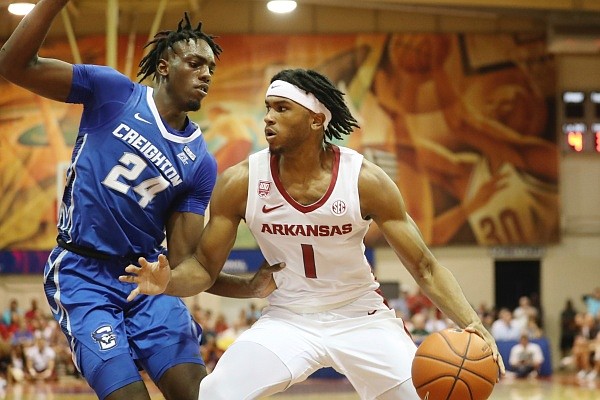 Arkansas coach Eric Musselman wears his emotions on his sleeve at all times.

Rarely is there a moment when you don’t know exactly how he feels.

Less than five minutes after the No. 9 Razorbacks fell 90-87 to No. 10 Creighton in perhaps the best college basketball game of the early season, he let everyone tuned in to the Razorbacks’ radio broadcast know he felt like his group deserved to be in the Maui Invitational championship game.

“I’ve coached a lot of games, a lot of years, never seen anything like it,” Musselman told Arkansas play-by-play broadcaster Chuck Barrett following the loss, which dropped Arkansas to 4-1. “We couldn’t play any harder than what we played. Creighton is a great basketball team.

What Musselman said he had not experienced quite like Tuesday night was the disparity in personal fouls and free throws. Creighton finished the game 21 of 29 at the free-throw line.

The Bluejays were 1 of 1 at the stripe at halftime. Coming into the night, Creighton had attempted more than 28 free throws in a game five times in the last five years.

On the other side, Arkansas was 13 of 17 overall and 9 of 11 after halftime. Creighton was called for 16 fouls, and the Razorbacks were hit with 22, including 17 in the second half.

Forward Trevon Brazile fouled out in 31 minutes, Davonte Davis finished with 4 fouls, and 4 other Razorbacks — Anthony Black, Ricky Council, Jordan Walsh and Makhi Mitchell — had 3 apiece. Arkansas’ bench was also assessed a technical foul in the second half that enraged the Razorbacks’ fourth-year coach.

The technical was never explained on the ESPN broadcast, and Musselman was not asked about it by on-site reporters during his post-game press conference. Following the game, he made an opening statement then was asked if he could appreciate “how good of a game that was” and what Creighton did to shoot 7 of 14 from three-point range.

Five games into the season, the Razorbacks are not at full strength given freshman guard Nick Smith’s absence due to knee management. But they proved Tuesday they can compete, exchange haymakers and belong in every one of the conversations about the very best teams in the sport.

Black, Council and Brazile were special. As impressive as Black was in Monday’s blowout of Louisville, he showed in Arkansas’ second game at the event that he is already capable of carrying an offense and leading a team when needed.

He finished with 26 points on 10-of-18 shooting, 6 rebounds, 6 assists and 2 steals. According to HogStats.com, he is the first Arkansas player in the SEC era to record 26-plus points and six-plus assists in back-to-back games.

“Anthony has been unbelievable,” Musselman said.

Council aided Black with 24 points on 9 of 19 from the floor. His jump shot was largely stellar. He hit 2 of 6 three-point attempts and at least 4 mid-range jumpers, several of which kept the Razorbacks afloat offensively in the first half as Creighton shot 54.8% prior to halftime and led 40-34.

Brazile added 17 points, 6 rebounds and 2 assists, and was critical down the stretch with big-time shot making. Three times in the second half a bucket from Brazile gave Arkansas a lead, and a fourth score tied the game.

Over a stretch of 1:22, Brazile scored eight consecutive points for the Razorbacks. The flurry of offense came not long after the forward was shown in a clearly emotional state on the TV broadcast when around the team’s bench. The response was terrific and a show of great mental toughness.

Simply, Arkansas needed a couple more defensive stops. StatBroadcast shows that the Bluejays scored 1.200 points per possession and had points on 42 of 75 possessions.

There were teachable moments for the Razorbacks, too, like Davis' Flagrant 1 foul early in the second half and Walsh's lane violation with Arkansas down 85-82 with less than 30 seconds to play.

In addition to Nembhard, 7-1 center Ryan Kalkbrenner added 21 points on 9 of 12 from the floor; Baylor Scheierman had 20 points on 7-of-10 shooting; and Trey Alexander pitched in 12. Nembhard and Scheierman were a combined 6 of 9 from deep.

Per KenPom data, the Bluejays own the nation’s No. 8 offensive efficiency rating, scoring 114.6 points per 100 possessions.

The site also shows the Razorbacks rank 330th nationally with a defensive free-throw rate of 44.9%, which can be calculated when dividing their opponents' free-throw attempts by its field-goal attempts.

After Monday’s rout of Louisville, I wanted to see how Arkansas would respond on a big-time stage against a terrific, high-level opponent in primetime. Following a gut-wrenching loss, we’ll find out a lot more about the Razorbacks on Wednesday.

Nights like Tuesday can bring a team together and give them an “us-against-the-world” mindset. Musselman’s players fought tooth and nail, and he fought hard for them.

Expect more of the same from Arkansas to close its stay at the Maui Invitational.