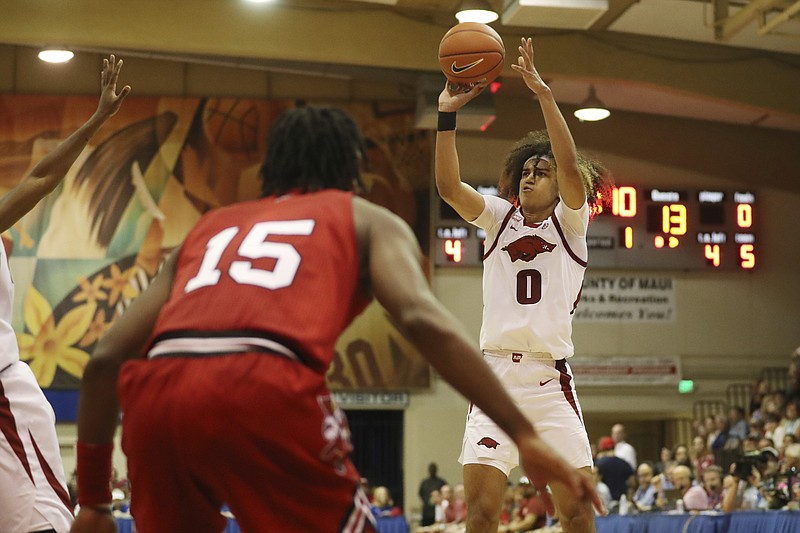 The No. 9 Arkansas Razorbacks had their own dunk contest in pounding Louisville 80-54 on Monday in their opener at the Maui Invitational before a sellout crowd of 2,400 at the Lahaina (Hawaii) Civic Center.

Louisville (0-4) went 6:30 without scoring when Arkansas took total control of the game, and the Cardinals had 10 turnovers in that span — including five by senior point guard El Ellis — and shot 0 of 3 from the field.

“When we play defense, it brings us a lot of energy,” Arkansas freshman guard Anthony Black, who had 26 points, 6 rebounds and 4 steals, said in a postgame news conference. “We actually like playing defense and take pride in playing defense.

“That leads to a lot of easy run-out dunks, which brings us a lot of momentum.”

“They kept the pressure up,” Louisville Coach Kenny Payne said of the Razorbacks in a postgame press conference. “They kept the energy and brought it more. And we fazed out.”

The Cardinals pulled within 43-38 on sophomore forward JJ Traynor’s hook shot with 14:26 left, but then they were overwhelmed by the swarming Razorbacks.

More from WholeHogSports: Analyzing the Razorbacks' blowout of the Cardinals

“I thought they out-competed us,” Payne said. “They wanted it more. But that’s what great teams do. There’s a reason they’re top 10 in the country, and they showed it.”

The Razorbacks again played without freshman guard Nick Smith — a preseason first team All-SEC pick by the coaches and media — as he continues to recover from a knee injury.

Smith, who has yet to make his college debut, watched from the bench and cheered on his teammates, as did a sizable contingent of Arkansas fans.

“I think a lot of us grew up watching this tournament, so we saw what the atmosphere was going to be like,” Black said. “But playing in it is always different.

“I think we had great support from the fans and that fueled our energy.”

Louisville had four assists compared to 20 for the Razorbacks.

“I just thought we kept getting more and more comfortable as the game went on,” Razorbacks Coach Eric Musselman said on Arkansas’ postgame radio show. “Both offensively and defensively.

Musselman said that for the first time this season the Razorbacks used a play he called “52 fist red” featuring double screens for Black.

“I thought it was going to open up dribble drives for Devo Davis,” Musselman said, referring to Arkansas’ junior guard. “And what it did was, it opened up the three for Anthony Black.”

Black became the first Razorback other than junior guard Ricky Council to lead Arkansas in scoring.

Council, a transfer from Wichita State, finished with 15 points, 4 steals and 3 rebounds.

“With a great point guard like Anthony Black, he played his complete game today,” Council said on Arkansas’ radio show. “He scored the ball and he assisted.

“I know he hit me on a couple of wide open ones. He’ll do that throughout the whole tournament.”

Black came into the game averaging 6.0 points, but he looked for his shot more with Smith out and sophomore forward Trevon Brazile struggling with foul problems.

“Anthony does so much,” Musselman said. “And to think that he had two more assists than the entire Louisville team is a real testament to his unselfishness for sure.”

Brazile, a 6-10 transfer from Missouri, averaged 14.0 points the first three games, but he was limited to 15 minutes Monday after picking up two fouls in the first half. He hit 1 of 2 free throws for his only point and was 0 of 2 from the field.

“My teammates just put a lot of confidence in me and trust in me to have the ball,” Black said. “I know I’ve got a lot of talent around me, so it’s not any pressure on me to just kind of do everything.

“We have a lot of good players, so I can just be me. Let the game come to me and then just help us win and have fun.”

Mahkel Mitchell, a 6-10 senior transfer from Rhode Island, had 12 points, 6 rebounds, 3 assists, 2 blocked shots and 2 steals in 20 minutes off the Arkansas bench.

“We were having a lot of fun,” Mitchell said. “We were dialed in.”

Mahki Mitchell, a 6-9 senior and Makhel’s twin who also transferred to Arkansas from Rhode Island, started and had 5 points, 6 rebounds, 1 blocked shot and 1 assist.

“I thought they did a really good job of patrolling the paint defensively.”

Makhel Mitchell led Arkansas with four dunks, Graham had three and Black and Council each had two.

Freshman forward Kamari Lands led Louisville with 13 points. Ellis, who came into the game averaging 24.0 points, was held to 11 on 4 of 16 shooting and had 7 turnovers.

Davis scored two points — he hit the first basket of the game to give the Razorbacks a lead they never lost — but Musselman credited him for defending Ellis.

“Phenomenal defense by Devo,” Musselman said. “But then I thought the other four guys on the floor with him did a great job of shrinking the floor [against Ellis].”

“They’re great athletes, great team,” Traynor said at a postgame news conference. “And they just kept the pressure on us all game. Respect to them for playing the defense they did.”

The Razorbacks evened their all-time record against Louisville at 4-4.

“Arkansas, give them a lot of credit,” Payne said. “That length, that athleticism, they are tough to deal with.

“They’re very well coached. Musselman does a great job with them. They’re only going to get better. And they’re young.”