Hogs had things under control vs. Rebels 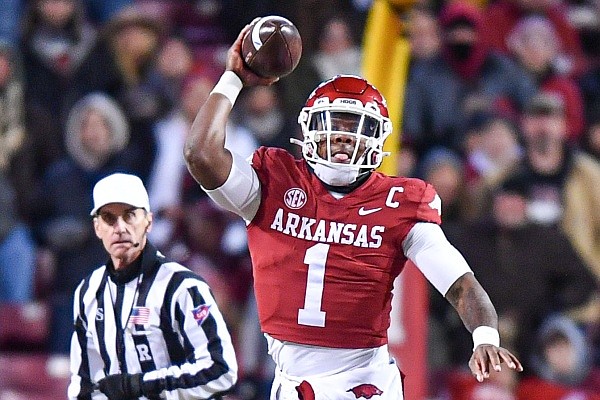 If before last Saturday’s game someone had said the Arkansas Razorbacks were going to have 503 yards of offense against a good Ole Miss team, the guess would have been that the Hogs were going to win.

If before the game someone said the Rebels were going to have 703 yards of offense, the guess would have been that the Hogs lose.

Both of those happened and Arkansas won 42-27, and it wasn’t as close as the score. Much of that was on Sam Pittman.

It was an odd game, one unlike any yours truly can recall. The Razorbacks gave up just 284 yards in its loss to LSU, but without KJ Jefferson they mustered only 249.

The Ole Miss game turned on the second play of the second half when Raheim Sanders bolted 68 yards for a touchdown and a 42-6 lead.

Pittman went totally conservative and it worked. Not only did the Hogs get the win, they came out of the game fairly healthy.

There is a difference in being conservative and playing not to lose, which is rarely a good thing.

Pittman, a long-time veteran of college football, knew the percentages, and he played them in favor of the Razorbacks.

In the first half, the Razorbacks ran 42 plays, 18 of them passes by Jefferson for 164 yards and three touchdowns. Time of possession favored Ole Miss by the slim margin of 16:05 to 13:55.

In the second half, the Razorbacks ran 24 plays, four of them passes for 4 yards. The 20 runs were bone-crushing, minute-eating plays that netted the Hogs 130 yards but consumed 15:55 of the time.

It was a hard-earned victory, but one that was not in doubt once the Hogs went up by 36.

True, Ole Miss can be an explosive team. The Rebels moved up and down the field, but it was apparent early they were not focused. They had three turnovers and more critically they had 12 penalties for 116 yards.

Reading the emotions of a team are part of the head coach’s job, and Pittman read Ole Miss’ perfectly.

Pittman also had the luxury of having his quarterback mostly healthy, and Jefferson is a threat on every play either with his legs or his arm.

If Ole Miss had mounted some sort of rally, he could count on Jefferson to start running and throwing again.

The ones that are being thrown around are Liberty, Music City, Gator and Las Vegas. It appears the Texas Bowl has its eye on Mississippi State regardless of the outcome of the Egg Bowl on Thursday night.

Ole Miss appears to be penciled in for the Citrus Bowl, which would be helped with a win over the Bulldogs, where the Rebels would play Penn State.

As for the Music City in Nashville, it will most likely choose between Arkansas and Kentucky who would face Bret Bielema and Illinois. There is a story line there between Bielema and Pittman.

That relationship may have been mended, but when Pittman left Arkansas for Georgia heated words were exchanged, and Pittman apparently had the last one.

The thing is at least four bowls want the Razorbacks and their fans, who have the reputation of showing up and winning their own party.

That might not be the case without the win over Ole Miss. Now only Missouri is looking to get bowl eligible this Friday.

Pittman and his staff were prime-time ready last Saturday, and while they couldn’t have predicted the perfect storm that would have let them take a 35-6 lead into intermission, they knew what to do with in the second half.

To run only 24 plays and have the ball 15:55 says a lot about the team, and it also saved the Rebels from having to flop to stop the jet-fuel tempo Arkansas is capable of when needed.