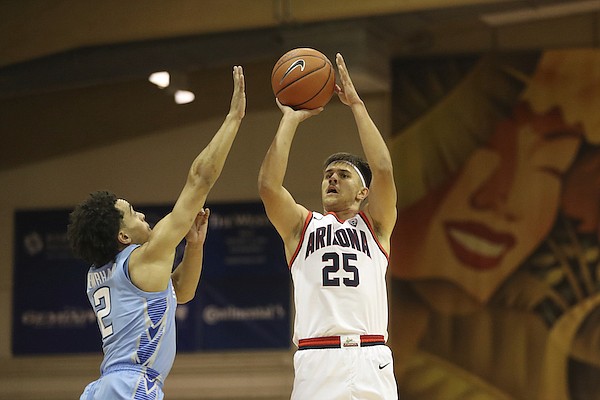 LAHAINA, Hawaii — Oumar Ballo dominated inside with 30 points and 13 rebounds for No. 14 Arizona, which held off No. 10 Creighton 81-79 on Wednesday to win the Maui Invitational for the third time.

The combination of the unstoppable 7-foot, 260-pound Ballo and his speedy, talented supporting cast was just enough for the Wildcats (6-0) to remain undefeated. Kerr Kriisa added 13 points and nine assists, Azuolas Tubelis had 12 points and Courtney Ramey scored 10. Arizona scored its final points with 2:21 to play but managed to hold on.

Ryan Nembhard scored 20 points for Creighton (6-1), which was trying to beat a ranked opponent for the third straight day. Ryan Kalkbrenner added 16 points, Trey Alexander scored 15 and Baylor Scheierman had 11 points and 11 rebounds.

Arizona appeared to be pulling away late, but the Bluejays kept hanging around.

Scheierman made a layup with 2:41 left to pull Creighton within 79-72 but Kriisa made a beautiful pass to Ballo for a dunk and an 81-72 lead with 2:21 left. He was fouled but missed the free throw.

Nembhard made a layup and Scheierman a 3-pointer to get Creighton within 81-77. Kalkbrenner made one of two free throws to cut the deficit to three. Ramey missed a 3-point attempt with 18 seconds left.

Creighton called timeout with 7.4 seconds left to set up a final play. Kalkbrenner didn't have an open 3 and passed to Nembhard, who was fouled by Ramey with 2 seconds left. He made the first shot and intentionally missed the second, with Arizona rebounding.

Ballo was strong from the start, tallying 16 points and nine rebounds in the first half to help the Wildcats to a 39-30 lead.

Creighton reached the title game by beating No. 21 Texas Tech in the opening round and stopping No. 9 Arkansas in the semifinals.