Aztecs have 'a lot to prove' against Arkansas in Maui finale 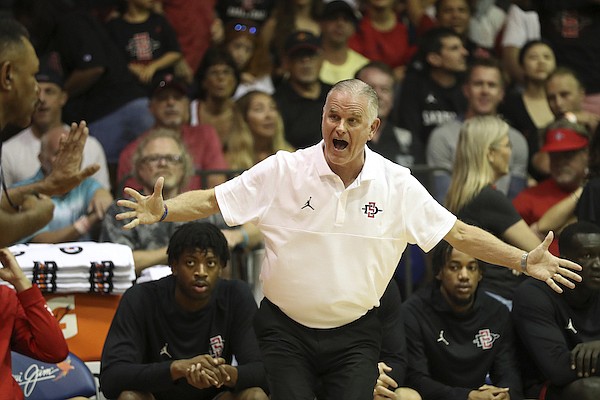 Arkansas’ stay at the Maui Invitational will conclude Wednesday with another matchup between ranked teams.

Both teams suffered their first loss of the season Tuesday in the semifinals at the Maui Invitational — Arkansas 90-87 to 10th-ranked Creighton, and San Diego State 87-70 to 14th-ranked Arizona.

The Aztecs (4-1) briefly took their only lead early in the second half before Arizona pulled away.

San Diego State is a perennial contender in the Mountain West Conference that has won 80 games since the start of the 2019-20 season. The team had the nation’s second-best record, 30-2, when the 2020 NCAA Tournament was canceled.

The Aztecs have played in the past two NCAA Tournaments and finished 23-9 last season when they lost 72-69 to Creighton in overtime during a first-round NCAA Tournament game in Fort Worth, Texas.

The Aztecs added three more players this season via transfer — Trammell from Seattle, Jaedon LaDee from TCU and Micah Parrish from Oakland. Trammell is the team’s leading scorer with an average of 14.4 points per game. He scored 21 points in the loss to Arizona.

Media members overwhelmingly predicted San Diego State to win its league championship during the preseason. The Aztecs began the season strong with notable wins over BYU (82-75) at home, at Stanford (74-62) and against Ohio State (88-77) on the first day of the Maui Invitational.

Sixth-year San Diego State coach Brian Dutcher, who was a long-time assistant to Steve Fisher before succeeding him nearly six years ago, said the game against Arkansas is a great opportunity for his program.

“We came here to play big games against good opponents,” Dutcher said. “I don’t want to sit here and say, ‘Boy, I wish we were playing a bad team.’ This is what we’re here for. We’re not in a Power 5 conference. We have to embrace these moments.”

Dutcher said it will be important for his players to quickly get past their disappointment from the loss to Arizona.

“We have to put this behind us or we’ll have no chance to play tomorrow,” Dutcher said. “There will be time to teach, but it’s not going to be a lot of teaching right now. It’s going to be prepping for the next game, small learnable moments and putting all our energy into Arkansas.

“I know my team will fight,” Dutcher added. “Now whether we play great and perfect basketball, I don’t know if that will happen or not, but I know they will bring the fight. They’re too good of kids and too tough a group not to, so we’ll look forward to the fight tomorrow.”