Bumper an ambassador for Razorback football 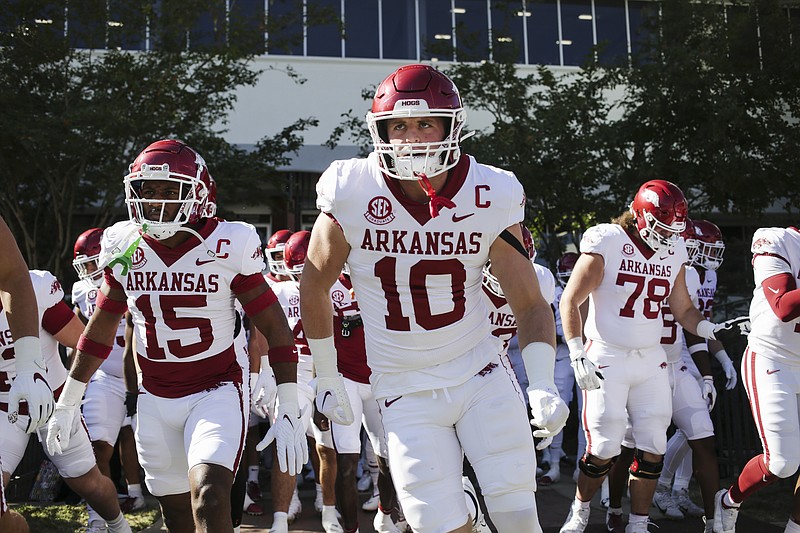 Arkansas linebacker Bumper Pool (10) runs onto the field prior to a game against Mississippi State on Saturday, Oct. 8, 2022, in Starkville, Miss.

Bumper Pool epitomizes what a football player is supposed to be.

For him to not play his final regular-season game this Friday, he isn’t hurt, he’s injured.

There’s a big difference, and Pool has played hurt far more than anyone knows or he’s willing to say because he’s not a complainer.

After 55 games of giving it his all, digging deeper and giving it more, he doesn’t owe anyone anything but to get healthy and be happy.

There have been others before him, and there will be others in future, but the senior from Lucas, Texas, just may not be physically able to go against Missouri or in a bowl game.

Sam Pittman said he had a list of injuries that includes both hips and his back. Anyone who has watched him for 55 games knows he’s being slowed, but hasn’t been stopped for the last five games.

This is a young man who wanted to be a Razorback and believed in the Hogs so much that he never considered transferring, not during the two 2-10 seasons under Chad Morris or at any other time.

When Pittman was hired, it was like the anchor many players needed.

Someone who believed in them and cared about them on and off the field.

More than likely he’s still hoping for a miracle, and he can be part of a team that breaks the Columbia, Mo., jinx.

Arkansas is 0-4 on the road against Missouri since the Tigers joined the SEC, and three of the losses were by a touchdown or less.

It is a little hard to get a handle on the Tigers this season. They are 5-6 overall (2-5 in SEC play), and obviously this is their last chance to make a bowl game.

For the season, they have scored 277 points, four more than they have given up.

In an odd move after the victory over South Carolina, the brass gave head coach Eli Drinkwitz a contract extension and raise. What will they give him if he beats Arkansas? The Gateway Arch?

Drinkwitz, an Alma native and Arkansas Tech graduate, said before last year’s game with the Razorbacks in Fayetteville: “I kind of like the rivalry we’ve got with Arkansas. I don’t remember the last time they beat us, so I kind of like that one. The Battle Line Rivalry, it’s pretty good for us. I think we’ll just keep that one right now. That’s a good one.”

That was last season. If you throw out the loss to the Vols this season, the Tigers’ four SEC losses have been by a total of 18 points.

While the game has yet to live up to the hype of a trophy game, it has become a sticking point for the Razorbacks and their fans.

It is one of the reasons Pool is probably hoping for a medical miracle and that he’ll be able to help get the Hogs their first win at Missouri.

It may take a miracle but Pool, a captain and leader on and off the field, will be there and he will be the biggest cheerleader in the stadium.

He’ll leave Arkansas as its leading tackler (he currently has 441 tackles). He’s won numerous awards, both conference and nationally, but they don’t give certificates for heart, and that’s what Bumper Pool played with on every down.