Tigers want what Razorbacks already have 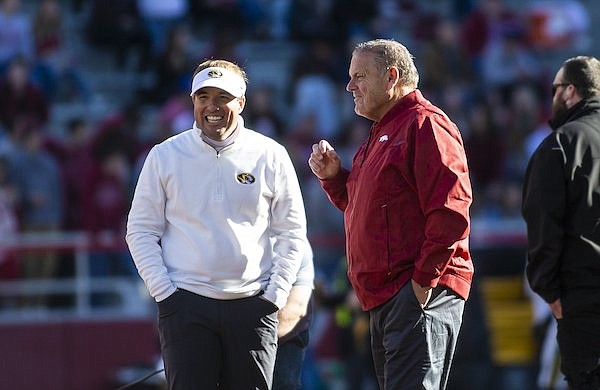 FAYETTEVILLE — All the incentives riding with Arkansas in last Saturday night’s 42-27 victory over Ole Miss seem to ride Friday afternoon with the Missouri Tigers against Arkansas.

The Hogs wallow 0-4 on Mizzou turf and 2-2 against the Tigers in Fayetteville and Little Rock since their annual SEC West vs. SEC East game commenced in 2014.

“I know they’re going to be fired up to get bowl eligibility,” Pittman said. “And we haven’t won up there. So, a lot of things.”

“A lot of things for us to play for, too,” Pittman said. “To continue to rise so our bowl eligibility opens up more bowls for us. Obviously, we can get to 4-4 in conference like we were last year and finish in the top half of the conference like we did a year ago. But, the bottom line is, Missouri is a rivalry game and we need to go play well against a very good football team.”

Both the Hogs and Tigers beat the same South Carolina Gamecocks that last Saturday stunned No. 5 Tennessee, 63-38.

“They’re going to outnumber you in the box and make you throw the football,” Pittman said.

In 2020 vs. Mizzou, starting in place of injured graduate transfer quarterback Feleipe Franks, Jefferson completed 18 of 33 for 274 yards and 3 touchdowns in a wild 50-48 shootout in Columbia.

Last year, starter Jefferson paced Arkansas 34-17 over Mizzou in Fayetteville. He completed 15 of 19 passes for 262 yards and 1 touchdown, and broke a 49-yard run.

“Obviously, this will be the third time that we’ve played against him,” Drinkwitz said. “Golly, I hope he’s graduating or going pro.”