7 keys in Arkansas' game vs. Missouri 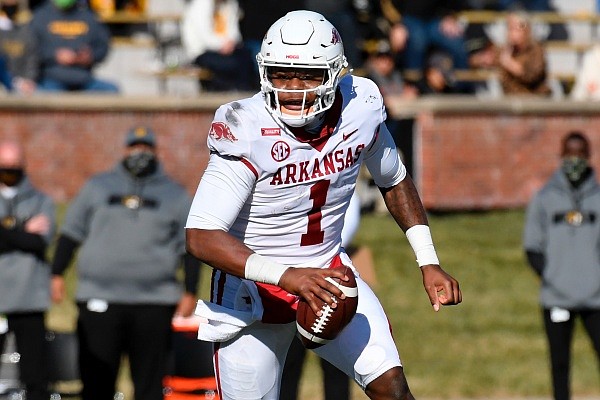 KJ on the road

Arkansas quarterback KJ Jefferson became the Razorbacks’ quarterback of the future two years ago against Missouri at Faurot Field.

Filling in for an injured Feleipe Franks, and playing with what he called “messed up” ligaments in his knee that he suffered earlier in the second half, Jefferson led a 13-play, 75-yard touchdown drive late in the fourth quarter that culminated in a 14-yard touchdown pass to Mike Woods with 43 seconds remaining. Arkansas coach Sam Pittman opted to try a two-point conversion to give the Razorbacks the lead.

Jefferson found Woods off a deflection for what appeared to be the winning score, putting Arkansas ahead 48-47. But Missouri kicked a 32-yard field goal as time expired to win 50-48.

Arkansas’ defensive failure did little to detract from what Jefferson accomplished during the go-ahead drive. After two incompletions to set up a third-and-10 from his own 25, Jefferson completed four consecutive passes for 34 yards and was complemented by a couple of first-down runs by TJ Hammonds to put the Razorbacks well into Mizzou territory.

Jefferson finished the drive 5 of 8 for 48 yards.

“Before we went out there I had my mind, ‘This right here is going to determine if this is for me or not. I’ve got to prove the doubters wrong, that I can play in this league,’” Jefferson said last year. “I went out there and gave it all I’ve got.”

Arkansas’ last go-ahead touchdown drive in the final five minutes of an SEC road game had been engineered by Ryan Mallett at Georgia in 2010.

Jefferson led the Arkansas offense so well and impressed Pittman and offensive coordinator Kendal Briles so much that they ended communication with a transfer quarterback following the game. That decision has turned out in their favor.

Returning to the scene of his 306-yard, 4-touchdown game from 2020 on Friday, Jefferson has a final chance this regular season to play the villain in a road venue. It is among the things he does best, Pittman has said, and Jefferson embraces the boos and hostile crowds.

“He’s a competitor and wants to do well at home and away,” Pittman said in late October, “but I think that might just be some competitive emotions that he’s having there. He really has played extremely well on the road.”

In his career, the quarterback has been remarkably efficient and effective through the air in true road games. Jefferson has thrown for 1,839 yards and 16 touchdowns against 1 interception in such outings.

Six of his eight career interceptions have come in games in Reynolds Razorback Stadium. This season, he has recorded eight passing scores and zero picks away from home. He did not play in the Oct. 8 road game at Mississippi State.

Missouri this season is 5-6 overall, but 4-2 in home games. And in those games, opponents have completed just 54.9% of pass attempts for 8 touchdowns and 7 interceptions.

Jefferson, according to Pittman, felt strong physically the day after Arkansas’ 42-27 victory over Ole Miss. He is ready to go against the Tigers and build on a three-score performance in his return to the lineup against Ole Miss.

A primary aspect to Arkansas’ success this season has been its run game.

A back-up quarterback started two of those losses, and a third loss came when Jefferson was less than full health with a shoulder/clavicle injury.

With a healthy Jefferson, the run game hums. His ability to read the defense in the zone-read option has been a contributing factor to Raheim Sanders’ big season, with 1,379 rushing yards through 11 games.

Jefferson is always a threat to run himself. He has gained 611 rushing yards this season, but has just 472 net yards when sacks are factored.

Sanders (232) and Jefferson (47) combined for most of Arkansas’ 335 rushing yards last week against Ole Miss. It was a welcome sight for the Razorbacks, who struggled to run the ball in losses to Liberty and LSU with Jefferson injured.

Statistically, Missouri’s run defense is similar to LSU and will be the best the Razorbacks have played since the Alabama game Oct. 1. The Tigers allow 128.5 rushing yards per game.

Pittman said the key to Mizzou’s run defense is a one-high-safety look that puts an extra defender in the box.

“They’re going, ‘You’re not going to run the football on us. You’ve got to throw it,’” Pittman said. “I think they’re very, very confident in their secondary, and they should be. They have played really good ball. But they’re going to stop the run. To me, that’s what they do and force you to throw the football.”

Georgia averaged a healthy 4.7 yards per carry against the Tigers, but only carried the ball 36 times while rallying from a second-half deficit.

The Razorbacks allowed 703 yards — the third most in program history — but won 42-27. At one point, the Rebels had more than 500 yards and only two field goals to show for it.

A trusted football voice explained this week that modern-day defensive success is judged by turnovers forced and how many field goals are forced in red-zone situations. Most offenses have the capability to put up big numbers, so each drive without a touchdown is key.

That was the case for three quarters against Ole Miss. Pittman said earlier this week the Razorbacks changed their defensive game plan later in the game to keep the Rebels from hitting a big pass and underestimated Ole Miss’ willingness to stick with the run game that racked up huge numbers. The Rebels had two running backs finish with more than 200 rushing yards.

Credit should be given to Arkansas defensive coordinator Barry Odom for his work since the Razorbacks’ bye week in October. Auburn, Liberty and LSU combined to score five touchdowns against Arkansas’ starting defense, and Ole Miss did not score a touchdown until the fourth quarter of a blowout.

The Razorbacks’ defense this week faces a Missouri offense that ranks near the bottom of the SEC in most statistical categories. The Tigers are 10th in rushing, 11th in scoring and 12th in passing.

Missouri has done a good job of keeping pressure off of quarterback Brady Cook, allowing 21 sacks through 11 games. The Razorbacks lead the SEC with 37 sacks.

Pittman was transparent Monday when speaking about linebacker Bumper Pool’s availability in Arkansas’ final two games of the season.

He said he does not know if the super senior will play for the Razorbacks again on account of various injuries, including ones to his hips and back. Roughly five weeks ago, Pittman admitted, he thought Pool’s record-setting career might be finished. He is Arkansas’ all-time leading tackler with 441 since 2018.

But the Razorbacks dialed back his in-game snaps and practice time to ensure his health to this point, and afford him time to rest and recover.

“He’s beat up, man,” Pittman said. “But he’s a trooper, and I don’t know how much further he can go, to be honest with you. And I think with us getting bowl eligible, it could or could not be his last game. I don’t know.”

Asked if he is holding out hope that Pool could play in the bowl game, Pittman said there is “not a lot of hope there.”

Should Pool not be able to play in the Razorbacks’ final games, back-up linebackers Chris “Pooh” Paul and Jordan Crook would be in line for extended snaps. Paul has 41 tackles, 7 tackles for loss and 4 sacks, and finished with a career-high 7 tackles against Ole Miss.

Crook has five tackles, including two against South Carolina and Auburn.

“He’s actually played the same or even a little bit more than Bumper has, just because we know Bump’s not full-speed healthy,” Pittman said of Paul. “Every game he seems to get a little more confidence. He played well against Ole Miss, ran around, did some nice things, so we have confidence in him.

“That moves Crook up another spot, too, to get him in the game and let him play a little bit more.”

In the spring, Pittman said Crook is “one of the hardest-working young guys I’ve ever seen,” and lauded his thick base, intelligence and desire to be coached.

Paul in recent weeks has made plays that can lead some to believe he is the future of the linebacker position for the Razorbacks. Arkansas fans will likely get a good, long look at Paul and Crook on Friday.

Which team can make the plays necessary to win a close game?

That has been an issue for the Razorbacks and the Tigers this season.

Missouri has been outscored 168-118 after halftime this season. Arkansas has outscored its opponents 172-161 in the second half, but there have been multiple lopsided fourth quarters in favor of the opponent, such as Ole Miss’ 21-0 finish last week.

Arkansas won a one-score game, 31-24, against Cincinnati to begin the year and made a flurry of big plays in the fourth quarter to hold off an upset bid by Missouri State and win 38-27 in the third game, but the Razorbacks have struggled to close out close games since. Three of Arkansas’ losses have been by three points or less — to Texas A&M (23-21), Liberty (21-19) and LSU (13-10) — and the Razorbacks were outscored 21-3 in the fourth quarter by Alabama after pulling to within 28-23 by the end of the third.

Missouri is 1-4 in games decided by seven points or less this season. The Tigers’ only one-score victory was 17-14 over Vanderbilt.

Close losses have included games against Auburn (17-14), Georgia (26-22), Florida (24-17) and Kentucky (21-17). Georgia and Kentucky scored late fourth-quarter touchdowns to take the lead, and Missouri made multiple end-of-game errors to lose at Auburn in overtime.

“They’ve been a little bit like us,” Pittman said. “They’ve lost some very close games to put them where they are record-wise, very similar to ours.”

Quarterback experience is important in tight games. Jefferson led a go-ahead drive at Missouri two years ago and led a game-winning drive against Mississippi State last season, plus a drive against Ole Miss last year that could have sent the game to overtime if the Razorbacks had elected to kick an extra point.

Brady Cook has not led a successful comeback drive in 12 starts for the Tigers, though he put Missouri in position to win at Auburn before Harrison Mevins missed a chip-shot field goal with no time remaining.

Missouri can follow the same script this week. The Tigers are 5-6 overall and could give the SEC an 11th bowl team with a victory.

Pittman was asked this week if he thought the Razorbacks could match Mizzou’s motivation to play the game.

“I think so,” Pittman said. “I mean, we’ve got a lot to play for. There’s a lot of difference in 7-5, 6-6 bowl-wise. Obviously, we can get to 4-4 in conference like we were last year, finishing in the top half of the conference like we did a year ago.

After playing in the cold the past two weeks, Arkansas might play in the rain at Missouri.

Rain chances have diminished somewhat, but the National Weather Service still has rain chances of between 20% and 30% on Friday in Columbia, Mo., with a high of 48 degrees.

It seems there are tough weather conditions each time Arkansas travels to Mizzou. The Razorbacks lost bitterly cold games in 2016 and 2020, and were shut out in a cold rainstorm in 2018.

Arkansas has not played in rainy conditions this year. In fact, the Razorbacks have not played in the rain since a 2020 loss to LSU. The Tigers’ 40-12 loss at Kansas State in September was delayed twice by lightning.

Pittman said early in the week that the Razorbacks planned to work on some wet-ball drills to be prepared for rain.

“We’ve had that, maybe two or three possibilities this year where we squirted the balls and have a period where KJ will throw it and we’ll catch it and backs carry it,” Pittman said. “Of course, (center) Ricky (Stromberg) would be a concern as well with the snaps.”