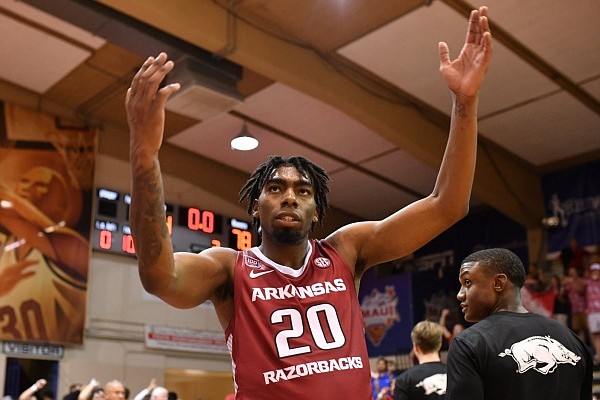 In his opinion, it was a potential difference maker and something the Razorbacks would have to contend with. For more than 25 minutes, the No. 17 Aztecs’ toughness helped them control No. 9 Arkansas in the third-place game at the Maui Invitational.

But then the veteran edge and grit of one of the Razorbacks’ old guys, Kamani Johnson, changed the complexion of the game. His efforts in the second half and overtime were essential to Arkansas’ thrilling 78-74 victory over San Diego State to wrap up the event.

The Razorbacks finished the tournament with a 2-1 mark. They also beat Louisville 80-54 in the first round and fell to No. 10 Creighton 90-87 in the semifinals.

Johnson, in his third season with the program, had played 21 minutes in Arkansas’ first 5 games this season, scoring 2 points and grabbing 5 rebounds. He pitched in 7 enormous points and 7 gutsy rebounds in 19 minutes Wednesday.

Four of his rebounds were on the offensive end, and the biggest came after freshman guard Anthony Black’s runner in the final seconds of regulation missed. With the Razorbacks down two, Johnson grabbed the rebound and added a score at the buzzer to send the game to overtime.

More from WholeHogSports: No. 9 Razorbacks beat No. 17 Aztecs in overtime thriller

In the extra period, Johnson finished with 2 steals, 2 defensive rebounds, 2 offensive rebounds and 4 points. When Arkansas needed an infusion of energy after trailing by as many as 13 points, he came through like a man possessed.

And like a veteran with some edge of his own and a lot to prove.

Musselman commended the 6-7 forward for his energy and proficiency in help defense, which he noted changed for the better when Johnson entered the lineup. The Razorbacks outscored the Aztecs by 14 points in his 19:07 on the floor.

Johnson, speaking to Barrett in a post-game radio interview, was asked if he decided to stay at Arkansas and not transfer after last season for the chance to have a personal and team moment like the one Wednesday.

“I was ready for the moment, and I feel like I’m one of the leaders on this team, so I had to show them how to fight. It was just a team effort out there. I love how we fought, and that’s just going to help us in March.

“That’s one of those gut wins, you know what I mean? I don’t even know what to say.”

Johnson’s fresh legs and rebounding motor made life difficult for San Diego State after halftime. Musselman on a number of occasions has labeled Johnson one of the best offensive rebounders in the country.

After Wednesday’s game, he has an offensive rebound rate of 23.9% this season, according to KenPom data. Eight of his 12 boards in 40 minutes played have followed an Arkansas miss.

Johnson said he told teammates prior to the game-tying putback to simply get up a shot and leave him a little bit of time to have an opportunity to corral a potential miss. Black did, and Johnson did.

“That right there just showed me our young guys ain’t going to quit,” Johnson said. “Our whole team’s not going to quit. That’s going to help us going into March, for sure.”

Johnson’s remarkable performance off the bench was the story of the game. Forward Trevon Brazile, a transfer from Missouri, was a fairly close second.

Brazile finished with a team-high 20 points on 6 of 14 from the floor and 3 of 8 from three-point range. He also added a game-high nine rebounds, finishing many of the Razorbacks’ defensive possessions impressively.

The 6-10 forward knocked down each of his three-pointers after the break. Two of the perimeter buckets came in the opening four minutes.

But his most impactful play of the night came in the final 10 seconds of regulation when Aztecs guard Lamont Butler was trapped and lost the ball with San Diego State leading 67-65.

Brazile was first on the floor for the loose ball, and he called a timeout to secure possession for the Razorbacks. Black missed the runner out of the break, Johnson added the putback, and Arkansas gained control in overtime.

“I didn't know that the guy was going to give it up that easy,” Brazile said of the late Aztecs turnover. “He's a senior guard. Those guys are old. He lost the ball, (I) dove on it, timeout as soon as I got it. … I'm a little surprised he didn't call timeout. He was in a bad situation. He was fumbling the ball. I'm surprised his coach didn't call a timeout.

“He didn't call a timeout, we got the ball, Kamani made a big play, and then (we) went from there.”

After scoring only one point in the 80-54 win over Louisville, Brazile closed the tournament with 37 points, 15 rebounds, 3 blocks and 3 steals against a pair of top-20 teams. He hit 6 of 13 three-point attempts, too.

Brazile is shooting 41.7% from three this season.

“The main thing, I was just trying to be a leader on the court,” Brazile said. “I know my teammates needed me, so just playing hard, keeping us together, (we) had a good (outcome).”

Black finished with 15 points and 5 rebounds, and was Arkansas’ representative on the all-tournament team after averaging an event-high 22.3 points.

Wichita State transfer Ricky Council added 19 points against San Diego State, as well. He had 1 point at halftime, but he came alive afterward, scoring 13 points in the second half and 5 in overtime. He made the first two shots in the extra period.

Council averaged 19.3 points, 3.3 assists and 2.7 steals per game at the Maui Invitational. It was already known before the trip, but Arkansas has a gem in Council, who played 81 minutes combined against Creighton and San Diego State, and overcame a 0-of-7 shooting start Wednesday.

The Razorbacks are tough as nails. That is the chief takeaway from their time in the sport’s premier early-season tournament.

Going in, everyone expected Arkansas to at some point come face-to-face with adversity during the trip. This group has great resolve, and a will to win and be great.

The Razorbacks are going to be a bear to try to beat in the months to come.