Arkansas at Missouri: How to watch and listen, betting line, team comparisons 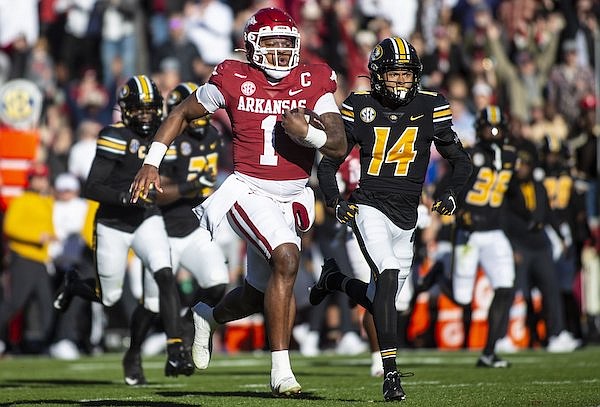 Arkansas quarterback KJ Jefferson (1) carries the ball during a game against Missouri on Friday, Nov. 26, 2021, in Fayetteville.

TELEVISION The game will be televised on CBS and can be accessed via the Paramount-Plus app (subscription login required).

WEATHER According to the National Weather Service, Friday will be sunny with a high near 53 degrees in Columbia, Mo.

BETTING LINE Arkansas is a 4 1/2-point favorite, according to VegasInsiders.com.

NOTABLE Arkansas qualified for a bowl game last week. Missouri can qualify for a bowl game by beating the Razorbacks, but its season would likely be over with a loss....Arkansas is 0-5 all-time in games played at Missouri, including 0-4 since the Tigers joined the SEC. The Razorbacks blew double-digit leads at Missouri in 2014, 2016 and 2020....Arkansas defensive coordinator Barry Odom was the head coach at Missouri from 2016-19....Missouri receiver Barrett Banister, a Fayetteville native, might miss the game, according to reports. Banister had a career-high seven receptions for 91 yards against New Mexico State last week....Arkansas linebacker Bumper Pool is doubtful with injuries to his hips and back....Arkansas is 0-2 this season in trophy games, with losses to Texas A&M and LSU by a combined five points. The Razorbacks and the Tigers play for the Battle Line Trophy.