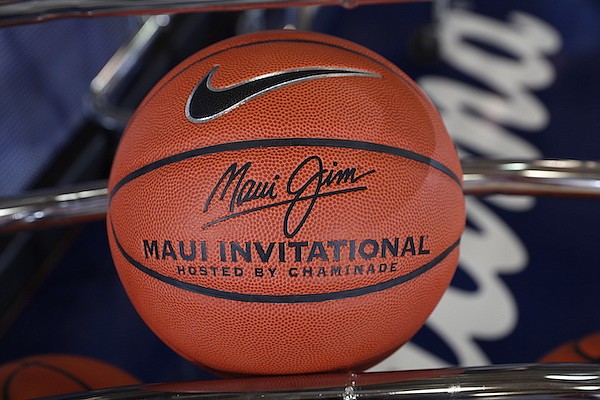 The official basketball is shown prior to the Maui Invitational on Monday, Nov. 21, 2022, in Lahaina, Hawaii. (Photo by Brian Spurlock/KemperLesnik)

There was an on-court confrontation following Arkansas' 78-74 overtime victory over San Diego State on Wednesday at the Maui Invitational.

In a video shared with WholeHogSports.com by Blair Cartwright of Springdale, a man can be seen rushing toward members of Arkansas’ staff as they left the floor following the game.

“There was just an Aztec fan that came down and said some things," Arkansas coach Eric Musselman said when asked about the incident in his post-game news conference.

“There (were) words exchanged,” Musselman added.

In a statement posted to its Twitter page, the Maui Invitational referred to the incident as isolated.

“Security acted quickly and appropriately to immediately remove those involved from the arena,” according to the statement.