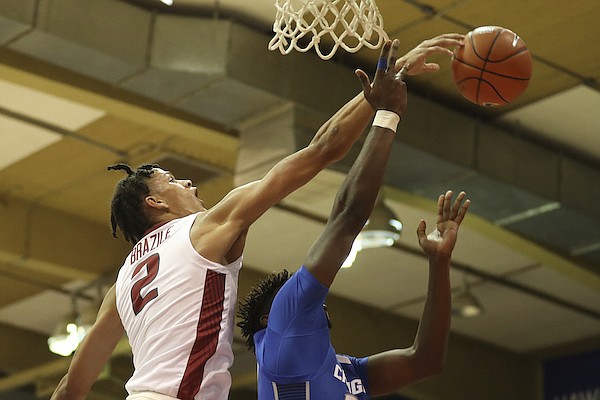 FAYETTEVILLE — In Trevon Brazile’s first season at the University of Arkansas after transferring from Missouri, the 6-10 sophomore has gotten national attention soaring above the rim for highlight dunks.

But it was Brazile’s dive on the court at the Lahaina (Hawaii) Civic Center on Wednesday night that helped the No. 9 Razorbacks come back to beat No. 17 San Diego State 78-74 in overtime in the third-place game of the Maui Invitational.

San Diego State junior guard Lamont Bradley got the inbounds pass and was trapped by Brazile and Black.

When Bradley lost the ball, Brazile dove for it, made a steal and called timeout with 7.5 seconds left.

“I’m a little surprised [Bradley] didn’t call timeout,” Brazile said in a postgame news conference. “He was in a bad situation. He was fumbling the ball.

“I’m surprised his coach didn’t call a timeout. … We got the ball. Kamani [Johnson] made a big play, and then we went from there.”

Johnson, a senior forward, had a tip-in at the buzzer off a missed driving attempt by Black to tie the score 67-67 and send the game to overtime.

Johnson, who had a rebound basket to give the Razorbacks a 75-73 lead, clinched the victory by hitting two free throws with 3.7 seconds left for the final 78-74 margin and then stole the Aztecs’ inbounds pass.

“I mean, you’re always worried when you’re down double digits,” said Brazile, who had 20 points and nine rebounds. “But I just kept huddling the guys up, telling them, ‘We’ve got to keep fighting, we’ve got to stay in it.’

“It’s an older team. We prepped for them hard. We were well-prepared, but we knew it was going to be a fight going in.”

Council, a junior guard who played all 40 minutes in No. 10 Creighton’s 90-87 victory over Arkansas on Tuesday night, missed his first seven shots against San Diego State — including a dunk attempt.

“I was close to taking him out and trying to get him a rest,” Razorbacks Coach Eric Musselman said on Arkansas’ postgame radio show. “But he said, ‘Just give me another opportunity, Coach. I’m still here. My legs are OK.’ ”

Council, who scored 15 points in Arkansas’ 80-54 victory over Louisville Monday in the first round of the Maui Invitational and 24 against Creighton, finally got his first basket against San Diego State on a three-point play with 14:03 left that pulled the Razorbacks within 45-37 to start their rally.

Black had 15 points after he combined for 52 against Louisville and Creighton. His 22.3 scoring average led the Maui Invitational and he was named to the all-tournament team.

“We thought somebody off the bench that maybe hadn’t played [Tuesday night] could have an impact and obviously Kamani Johnson was absolutely incredible the last 19 minutes of the game.”

Johnson, who didn’t play in the tournament until he came off the bench with 14:25 left in regulation against San Diego State, finished with 7 points, 7 rebounds and 2 steals.

“It just shows how tough of a team we are,” Johnson said on Arkansas’ radio show of the comeback. “That’s an older team, so Coach said it’s going to be a game just like Creighton.

“We prepared for it, we got down, but that right there just showed me our young guys ain’t going to quit. Our whole team’s not going to quit. That’s going to help us going into March, for sure.”

San Diego State opened the tournament with an 88-77 victory over Ohio State and lost to No. 14 Arizona 87-70 to get a matchup with Arkansas.

“That was a heck of a basketball game,” Aztecs Coach Brian Dutcher said in a news conference. “Two teams on tired legs finding a way to gut it out.

“It was exciting. Obviously, we wish we would have closed better.”

Dutcher said he had made Bradley aware before his critical turnover that the Aztecs had a timeout available to call if needed and also would keep possession in a jump ball situation.

“So obviously if he got tied up maybe could have held it and tried to get a jump ball,” Dutcher said. “I could have maybe come down the sideline and taken a timeout.

“I thought he was probably going to get fouled or at worst a tied up ball. They ended up making a play and securing the ball. So that’s a credit to Arkansas’s press at the end.

“That length and athleticism paid off for them.”

Brazile said the Razorbacks were focused on coming back one play at a time on offense and defense.

“Look, San Diego State’s coaching staff I thought did an incredible job,” Musselman, who as Nevada’s coach had a 3-8 record against the Aztecs in Mountain West games, said in the postgame news conference. “They controlled the game for most of the game. We did just enough to hang around.”

Musselman said the game reminded him of his days as an NBA head coach with Golden State and Sacramento.

“It’s not often that a game has an NBA feel how it ended, but that’s how a lot of NBA games end,” he said. “You just keep talking to your team about, ‘Hang around, hang around.’ Eventually you try to get two or three stops in a row.”

Arkansas’ biggest stop was provided by Brazile, who for a change got down for a steal instead of way up for a dunk.