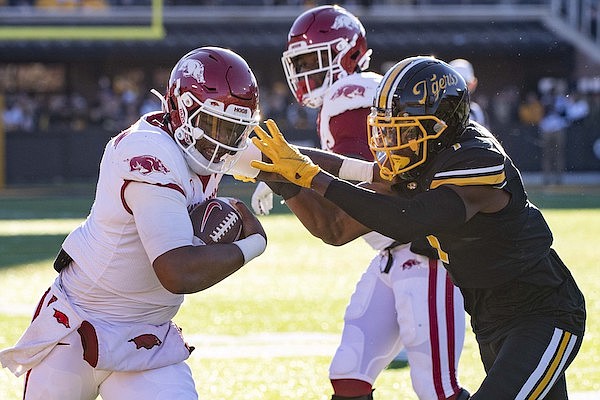 Arkansas is still winless in football games at Missouri.

The Razorbacks lost 29-27 to the Tigers on Friday in the Battle Line Rivalry game to fall to 0-6 all-time in Columbia, Mo., including 0-5 in SEC games played at Faurot Field.

Missouri (6-6, 3-5 SEC) earned bowl eligibility one week after Arkansas did so with a victory at Ole Miss. The Razorbacks (6-6, 3-5) will learn their bowl destination Dec. 4.

Arkansas finished the regular season with losses in three of its last four games — all by three points or less.

The Razorbacks have lost four games by three points or less this season, including in all of their rivalry trophy games against Texas A&M, LSU and Missouri.

“We wanted it so bad," said Missouri coach Eli Drinkwitz, who grew up about 40 miles south of Fayetteville in Alma. “We tried not to make it bigger than it was, but we were playing for more.”

Cam Little kicked two second-half field goals for the Razorbacks, including a 20-yarder with 12:40 remaining after Arkansas failed to score three times from the Missouri 2-yard line.

The Razorbacks did not gain a first down on their next two drives.

Arkansas began its final drive from its own 20 with 14 seconds remaining following a punt. Quarterback KJ Jefferson threw a 12-yard pass to tight end Trey Knox on the first play of the drive before a failed lateral play ended the game.

The Razorbacks finished with 318 yards of offense, including a season-low 113 yards rushing.

"They whipped us," Pittman said. "They physically dominated us."

Cook completed 16 of 26 passes for 242 yards, rushed 18 times for 138 yards and accounted for 2 touchdowns. He led one of the Tigers’ best offensive performances of the season that totaled 468 yards.

Jefferson completed 20 of 27 passes for 205 yards and 2 touchdowns, and was intercepted on the Razorbacks' first drive of the second half. The Tigers held the SEC’s No. 2 rusher, Raheim Sanders, to 47 yards on 10 carries.

Missouri led by as many as 10 points before halftime. Cook’s 9-yard touchdown run on the first play of the second quarter put the Tigers ahead 17-7.

Arkansas answered with a 12-play, 75-yard drive that was capped with a 27-yard touchdown pass from Jefferson to Matt Landers that cut Mizzou’s lead to 17-14.

Missouri improved to 7-2 in games against Arkansas as conference opponents. The Razorbacks won last season to snap a five-game losing streak in the series.

"We’ve got a very disappointed locker room right nowm, and we certainly would like to get this taste out of our mouth in a bowl, but this is going to be hard to get rid of," Pittman said. "We felt like coming in here we were ready to go, ready to play, and physically we just got whipped."